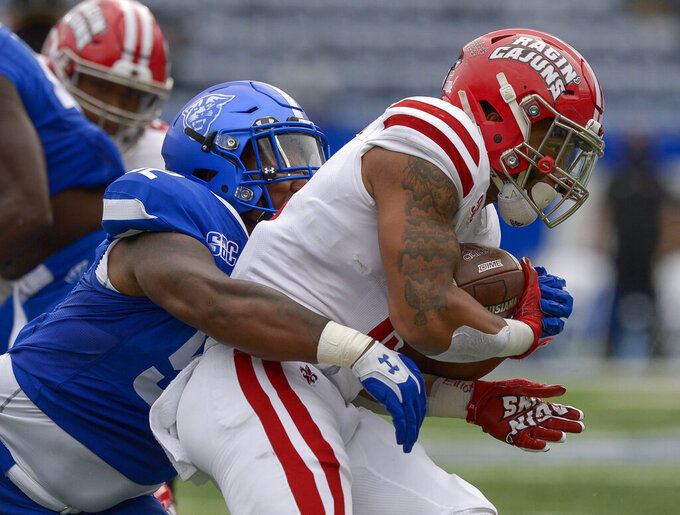 Louisiana-Lafayette coach Billy Napier is about to see what his No. 19 Ragin-Cajuns learned from a nearly stumbling out of the rankings only one week after a landmark victory had earned them some long-coveted national respect.

The next test for ULL (2-0, 2-0 Sun Belt) comes at home Saturday against Georgia Southern (1-0), which has been the Sun Belt Conference’s giant toppler in recent seasons. The Eagles’ only two victories over ranked FBS teams came against league rival Appalachian State in each of the past two seasons.

The Cajuns, who opened their 2020 campaign by going on the road and stunning then-No. 23 Iowa State on Sept. 12, nearly squandered the credibility gained from that triumph last weekend. They fell behind by two touchdowns at Georgia State before rallying to win in overtime.

“It’s human nature,” Napier said. “It’s a teachable moment. The challenge for us is to keep perspective and realize that the external factors really don’t matter. It’s more about the execution and the effort and the focus and the discipline and poise.”

Poise seems to be one thing the Cajuns have and a reason they’ve begun a season with two road victories for the first time in program history. They have talent and experience, too, particularly in the offensive backfield with Elijah Mitchell and Trey Ragas, who have each posted 1,000-yard rushing seasons. Meanwhile, quarterback Levi Lewis is primed to build on his 2019 season, when he set single-season school records with 3,050 yards and 26 touchdowns passing.

What Napier is waiting to see is the discipline required to be sharp from start to finish.

“We have a team that has tons of potential that maybe just doesn’t quite perform on a consistent basis like it should,” Napier said. “We’ve got to have a little more mental intensity and urgency early in the game."

Georgia Southern has yet to play an FBS foe or field its regular lineup. Numerous players missed the Eagles’ lone game against FCS squad Campbell because of either positive coronavirus tests or tracers' concerns about possible exposure. The Eagles also have had two games called off because of the pandemic, starting with their originally scheduled opener against Boise State. Last weekend's game against Florida Atlantic also was postponed.

“It would have been really good for us to be able to get that second game in (last week) because we had a lot of things to clean up,” Lunsford said. “Our guys have done a really good job at practice, but it’s different when you get into a game, especially going up against a team that’s very experienced, very talented, and ranked.

“But I definitely don’t want to lean on the negative,” Lunsford added. “I would rather sit here and say, ‘Man, we’re getting an opportunity to play.’ Our guys have worked very hard for this so I’m excited for them.”

Georgia Southern’s Shai Werts rushed for 155 yards in the Eagles' lone game this season – and that was no anomaly. It was the 10th time Werts had rushed for at least 100 yards in a game. The senior is up to 2,370 yards and 23 TDs rushing in his career.

The Eagles’ defense could be challenged to contain Mitchell and Ragas, who combined for 208 yards and three TDs rushing against Georgia State last week. Mitchell had the bigger game, carrying 16 times for 164 yards and two touchdowns, including the game winner in overtime around the right end. Mitchell now has 11 100-yard rushing games in his career and nine games with two or more scores.

While Lunsford wouldn’t go into detail about which players were sidelined in recent weeks because of COVID-19 concerns or conventional football injuries, he said he’s now less concerned about key players’ availability than their mental and physical preparedness.

“We pretty much expect to have the majority of our guys back," he said. “The big piece to us will be, will our guys be ready? The ones that have not been with us and have had to sit out for a bit -- is their conditioning right? Is their body right? Are they mentally ready to play the football game?”

Napier said opponent scouting was bound to be tricky this week because Georgia Southern not only had two games cancelled but also did not play numerous regulars in their lone game.

“It’s much like last week. We had no film of Georgia State,” Napier began. “But I do think this season’s unique. Our focus is on ourselves. ... Certainly, they’ve had COVID issues much like many teams across the country have."