No. 20 USC faces Arizona after escape against Arizona State 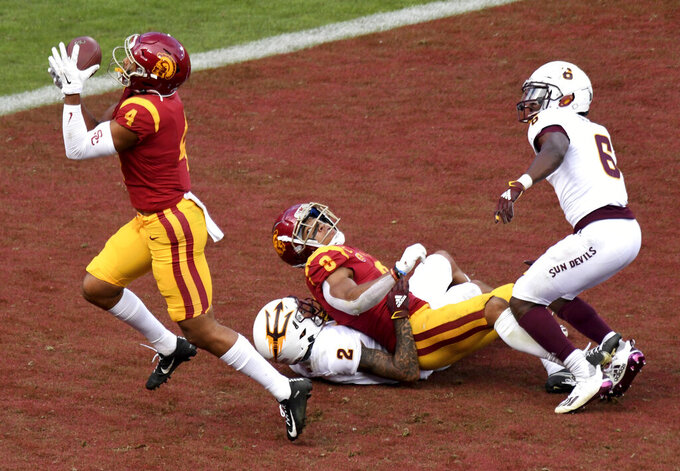 USC is hoping to have an easier time against a second straight school from Arizona in its first road game. The Trojans barely escaped with a 28-27 win over Arizona State in their opener by scoring two touchdowns in the final 2:52. The Wildcats will be playing their first game of 2020 after the opener at Utah last week was canceled due to positive coronavirus tests leaving the Utes without enough scholarship players.

Arizona's defense against USC QB Kedon Slovis. Arizona suffered some big setbacks during the offseason when three starting linebackers, expected to be the strength of the team, decided to transfer. Instead of getting a game under their belt before facing Slovis, the Wildcats now have to face one of the Pac-12's best quarterbacks in the season opener. Slovis threw for 381 yards and set a school record with 40 completions against Arizona State.

USC: WR Bru McCoy. The freshman had quite a debut for the Trojans. He caught a TD pass in the final three minutes after it tipped off teammate Amon-Ra St. John's hands and recovered the ensuring onside kick that set up the winning score against Arizona State. He finished with five catches for 51 yards.

Arizona: QB Grant Gunnell. The sophomore shared starting duties with Khalil Tate last season, but the offense is his this year. Gunnell threw for more than 1,200 yards and completed 65% of his passes last season. He has thrown 92 straight passes without an interception.

USC has won seven straight games in the series and is 14-4 all-time in Tucson. The Trojans have won all five games against Arizona under coach Clay Helton. ... The game is the latest known start in Arizona history due to the coronavirus pandemic. It's USC's latest road opener in 102 years. ... Keep an eye on Arizona RB Gary Brightwell. The senior can be explosive and USC's defense had a few tackling problems against Arizona State. ... USC's Marlon Tuipulotu was the Pac-12 defensive lineman of the week after finishing with eight tackles, including two for losses, against Arizona State.