No. 20 USC gets another test against Arizona in road opener 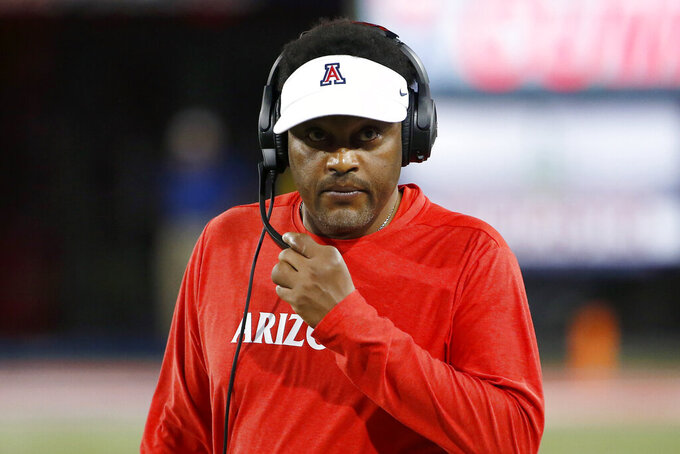 Arizona head coach Kevin Sumlin is shown during the second half of an NCAA college football game against Texas Tech, Saturday, Sept. 14, 2019, in Tucson, Ariz. Sumlin could be on the hot seat this season after going 9-15 his first seasons at Arizona. (AP Photo/Ralph Freso)

TUCSON, Ariz. (AP) — Southern California was outplayed for 57 minutes in its season opener against Arizona State. The Trojans pulled it together just in time, scoring a touchdown on a tip, recovering an onside kick and scoring another touchdown to win 28-27.

Shaky as it may have been, it still ended up in a victory, something the 20th-ranked Trojans hope they can build off heading into Saturday's road opener at Arizona.

“It starts with winning. That's No. 1, getting the win,” USC coach Clay Helton said. “Hopefully as you gain some experience, you get some rust off and those wins can be impressive wins. We were fortunate to come out with a great win against Arizona State this past weekend.”

USC (1-0, 1-0 Pac-12) had plenty of issues early against the Sun Devils, giving up big plays on defense and sputtering at times on offense.

The Trojans played their best when they needed to, scoring twice in the final three minutes.

Bru McCoy caught the first TD on a tip off teammate Amon-Ra St. John's hands then snagged the onside kick. USC won it when Kedon Slovis found Drake London for a 21-yard touchdown pass with 1:20 left.

USC should have had plenty of film on Arizona to work with for Saturday's game, but the Wildcats didn't end up playing last week.

Utah was left without enough scholarship players due to positive COVID-19 tests and contact tracing and asked the Pac-12 to cancel the game. The Wildcats found out just before boarding their plane to Salt Lake City, pushing back the start of their season another week.

“Obviously we were disappointed,” Arizona coach Kevin Sumlin said. “Our guys were extremely disappointed, but we’ve moved on. Friday seems like a long time ago right now, the way this year’s been going. Another weekend of watching everybody else play becomes frustrating. We’ve got a great opportunity at home this weekend, and that’s where we’re at.”

Grant Gunnell shared quarterbacking duties with Khalil Tate last season and now will run the offense by himself.

The sophomore threw for 1,239 yards and nine touchdowns with one interception while completing 65% of his passes last season. He enters this season with a streak of 92 straight passes without an interception.

“I see and feel pressure as something that drives me,” Gunnell said. “If you’re not feeling pressure, like those butterflies in your stomach, you don’t love football. You can ask anyone, that is kind of what drives you. And what you love about football is that nervous feeling where you have butterflies in your stomach. There is definitely pressure, but I wouldn’t say it is a negative thing.”

USC AGAINST THE RUN

The Trojans had trouble giving up big plays last season and the trend continued in the opener under new defensive coordinator Todd Orlando.

USC struggled with tackling and had a rough day against the run, allowing Arizona State to rack up 258 yards rushing. The Trojans gave up five plays of at least 20 yards and let the Sun Devils average 6.5 yards per carry.

Arizona's run game is led by Gary Brightwell, an explosive senior who averaged 5.8 yards per carry as a backup before becoming the primary back this season.

"We know that we can play much better than we did,” Orlando said. “End of the day, we won the ball game and let’s move on to the next one, but they’re a space team. They’re gonna get people the football, dynamic guys, get them in space and try to run away from you.”

The strength of this year's team was supposed to be the linebackers. When Tony Fields II, Colin Schooler and Kylan Wilborn — along with safety Scottie Young Jr. — all decided to transfer, the position became a big question mark.

They will all get a stiff test right out of the gate against Slovis, a complement of talented receivers and multiple running backs who can break off big runs.

USC racked up 556 yards of offense against Arizona State and Slovis threw for 381 yards while breaking the school record with 40 completions.