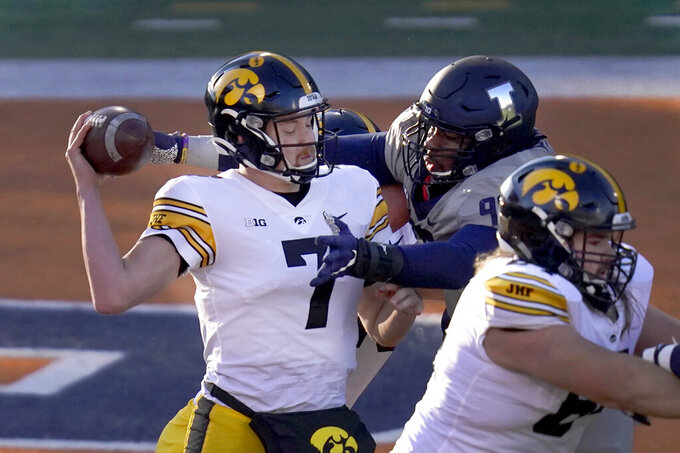 Things to watch during the eighth week of play in the Big Ten Conference:

The reflex is to make Michigan-Ohio State the game of the week when it comes around each year, if only for the rivalry's rich vein of storylines.

“The Game” has been canceled because of an increase in COVID-19 cases at Michigan.

That's OK. Wisconsin-Iowa was going to be the best game in the Big Ten this week even if Michigan-Ohio State were played.

That's because the Badgers' defense is as good as any in the country. Wisconsin will be the biggest challenge to date for Iowa quarterback Spencer Petras.

He benefits from Iowa having a strong defense, too. Still, he's going to have to be at his best to beat Wisconsin in what should be a close and low-scoring game.

Illinois defensive end Owen Carney Jr. vs. Northwestern offensive line. Carney is tied for the Big Ten lead with five sacks and has seven tackles for loss. Northwestern's offense struggles to generate yards, and if Carney is disruptive, that gives Illinois its best chance to win the Land of Lincoln Trophy.

Michigan State cornerback Shakur Brown is tied for first in the FBS with five interceptions, including four in the last three games. ... Rutgers plays Maryland looking for its third Big Ten win, which would equal the program high set in 2014 and 2017. ... Illinois has started four quarterbacks for the first time since the program’s starters records began being tracked in 1975. ... Nebraska's Connor Culp has made nine consecutive field goals heading into the Minnesota game. Culp is 12 for 13 this season. The Cornhuskers used six kickers in 2019. ... Wisconsin has allowed 49 points through four games. The Badgers lead Power Five teams and rank No. 2 nationally in points allowed, at 12.3 per game.

Minnesota is a 10-point underdog at Nebraska. The Gophers have been off for two weeks because of a COVID-19 outbreak, and they will be missing more than 20 players who are in the Big Ten protocol. Also gone is star wide receiver Rashod Bateman, who opted out Nov. 25. The Gophers rushed for 329 yards while beating the Cornhuskers 34-7 in Minneapolis last year, and if workhorse running back Mohamed Ibrahim plays Saturday, the Gophers can't be counted out.

Penn State running back Keyvone Lee goes into the game against Michigan State having rushed for 229 yards the last two weeks. Penn State has run for more than 200 yards in two straight games, and the Spartans have been vulnerable against strong running teams.