No. 3 Villanova back again as team to beat in Big East 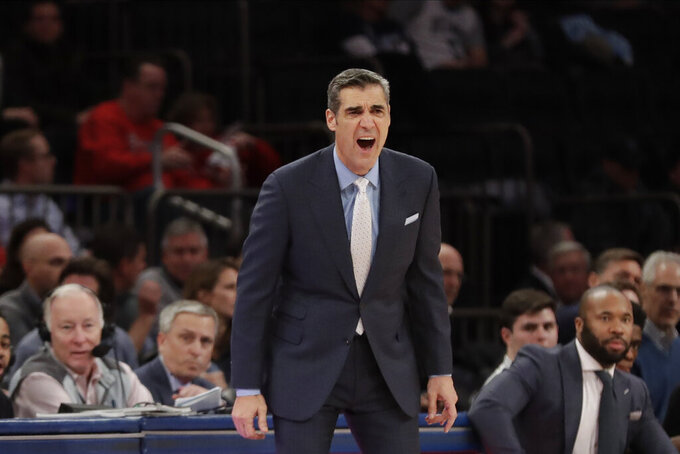 FILE - In this Jan. 28, 2020 file photo, Villanova head coach Jay Wright calls out to his team during the second half of an NCAA college basketball game against St. John's in New York. The Villanova Wildcats are again the favorite to win the Big East and are No. 3 in The Associated Press' preseason 2020-21 college basketball poll. Wright’s Wildcats received 11 first-place votes in the AP poll. (AP Photo/Frank Franklin II, File)

PHILADELPHIA (AP) — Jay Wright apologized for running late for an interview because of a hiccup with one of his thrice-weekly COVID-19 tests. The Villanova coach’s mouth wasn’t nearly as mouth-watering as the roster he assembles each season to keep the Wildcats atop the Big East.

“I wasn’t getting my saliva out fast enough,” Wright said with a laugh.

Already this preseason, the No. 3 Wildcats (24-7) were forced to take a hiatus from workouts because of a coronavirus outbreak and a combination of illness and injury had Wright running early practices with only eight players.

“You’re just holding your breath trying to get to the first game,” Wright said. “The opener can’t get here fast enough. We’re not prepared for it like I’d like us to be. But if I had a choice, I’d rather get there and start it. You’re just so worried about somebody testing positive. It’s in the back of your mind all the time.”

The Wildcats open Nov. 25 against Boston College at Mohegan Sun, a resort casino in Connecticut that has become a modified bubble for several early-season games. The Big East tossed around the idea of a bubble for conference play but the cost was too exorbitant. So the Wildcats will move ahead with games in Texas, Wisconsin, New York and Washington and a small home slate.

Should the games go on, look out.

Few teams are as ready to roll as the Wildcats, who ended last season with yet another share of the Big East crown and a lineup with a few future pros ready to chase the program’s third national championship (2016, 2018) under Wright. They lost leading scorer Seddiq Bey (16.7 points) after two seasons to the NBA- but have plenty of stars left.

Collin Gillespie, the always important senior guard, and sophomore Jeremiah Robinson-Earl were on the preseason All-Big East first team. Gillespie averaged 15.1 points and 4.5 assists last season and Robinson-Earl about averaged a double-double with 10.5 points and 9.4 rebounds.

“I really do feel fortunate that we have an experienced team going through this,” Wright said. “I constantly think about, if this was last year and we had all these new bodies in here and we were going through all this, it would be disastrous in our program.”

The Wildcats won at least 24 games for the seventh straight season and won a share of the Big East crown for the sixth time in seven seasons. Their lone miss over that stretch was in 2018, but they won the national championship anyway.

They’ll try for another in what promises to be the craziest of seasons.

“The balance is keeping them as safe as they can be and providing them the opportunity to play, which is actually in the best interest of their mental health,” Wright said. “It’s not, playing because we have to have an NCAA Tournament. These are young athletes who have committed their lives to this and they really want to play, bad.”

The number is both the record-number of victories Wright has at Villanova and the amount of rumors each offseason that have him linked to an NBA opening. This year, it was the 76ers.

Wright told Sixers general manager Elton Brand he was not interested in the job and put out a statement that he would not leave the program, in part to defuse the rumors and questions he received from recruits, his players and the media. Wright, a die-hard Philly sports fan, fully endorsed the Sixers decision to hire Doc Rivers.

“I think they got the perfect guy, I really do,” Wright said.

Villanova will play at no more than 15% of the 6,501-seat Pavilion, per current Pennsylvania guidelines for indoor venues. The only in-person fans will be athletes' families, students, faculty, and staff.

Wright said season-ticket holders, the majority of whom are big-donors, were on board with the decision to surrender their seats.

“Our season-ticket holders, who pay a lot of money, they’re saying, we’ll give up our seats so the students get their experience,” Wright said. “They’re giving up their opportunity to come to games so students can. It’s been a really unselfish, inspiring venture we’ve had in our little community here that we’re all really impressed with.”

Wright used a scheduled Dec. 6 game at Texas as an example of the changes the pandemic has affected the program. He said the Wildcats would normally fly in a day early, practice and stay a night and play. Now the Wildcats will likely fly in the night before the game and not see the court until warmups.