No. 4 Clemson looks for clincher at struggling Virginia Tech 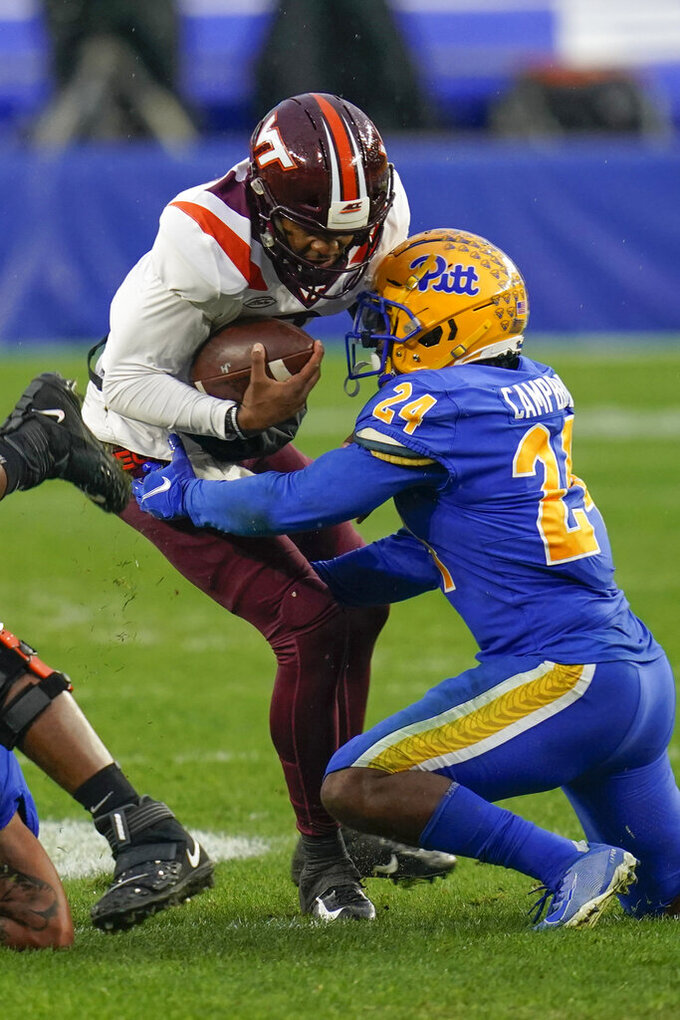 Clemson is one victory away from a sixth consecutive trip to the Atlantic Coast Conference championship game and the No. 4 Tigers would seem to be facing Virginia Tech at the right time.

The Hokies (4-5, 4-4) have lost three straight as their running game, once among the best in the country, has struggled in recent weeks, particularly on third down.

The Tigers (8-1, 7-1) will earn a spot in the ACC title game against No. 2 Notre Dame if they win. They are expecting the Hokies, coming off a bye, to be humming again on offense.

“They stress you. This is a team schematically that really knows what they’re doing and we’re going to have to be ready," Tigers coach Dabo Swinney said. "We’re going to have to play really well, lots of discipline. You don’t stop the run against these guys, you’re in trouble.”

Hokies coach Justin Fuente used the bye week to give veterans some time off and allow younger players to do the brunt of the work in practice, hoping his team will be fresh against the Tigers and against rival Virginia to complete the regular season.

“I think our guys feel much better. I thought it was the most important thing we could do in the bye week,” Fuente said. "Certainly, we need practice and we need to improve and all those sorts of things, but you get to the point where the law of diminishing returns comes into effect. That’s exactly what we needed both mentally and physically. It’s not just nine games in a row. And not to keep harping on this, but the mental strain of everything that is going on through (the pandemic) has been pretty difficult.

“I think our guys needed a little breath of fresh air and a chance to catch their breath for a couple of days.”

Especially before looking at film of the Tigers.

Here are some things to watch when Clemson visits Virginia Tech:

Virginia Tech has run for 24 touchdowns and leads the ACC with an average of 250.9 rushing yards. The Tigers have allowed six rushing touchdowns all season.

The Hokies are fourth nationally with 32 sacks, and Clemson is even better, ranking second with 36. The underdog Hokies hope their pressure on Tigers quarterback Trevor Lawrence can create game-changing plays.

Clemson backup running back Darien Rencher was named winner of the Disney Spirit Award, given to the most inspirational player, team, coach, staffer or figure in college football. Rencher, a fifth-year senior, helped organize Clemson’s march for unity in the aftermath of George Floyd’s death at the hands of Minneapolis police. He and Lawrence helped organize players across the country this summer to push for college football to be played amid the pandemic.

Hokies running back Khalil Herbert is averaging 167.8 all-purpose yards, which ranks second in the country among players seeing duty in five or more games behind Minnesota’s Mohamed Ibrahim (184.0).

“I wish Herbert were still at Kansas," Clemson defensive coordinator Brent Venables said this week. “He is an excellent player. He has great vision, great instincts and great burst. He is hard to get down. He gets a lot of yards after contact.”

The ACC announced this week that Clemson's postponed game at Florida State will not be made up, meaning Tigers will end their regular season at Virginia Tech. Notre Dame also had a rescheduled game canceled, locking the Irish into the title game on Dec. 19. Clemson would also wrap up a spot in the championship game with a loss by Miami, which has three games left.