No. 9 Miami returns to field in newly scheduled trip to Duke 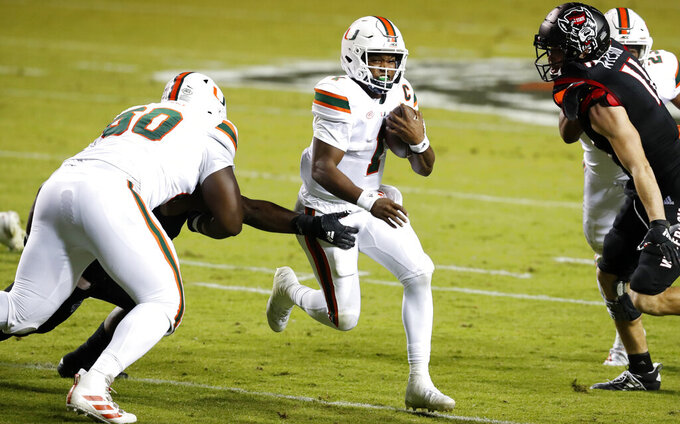 FILE - In this Nov. 6, 2020, file photo, Miami quarterback D'Eriq King (1) runs past North Carolina State linebacker Isaiah Moore, obscured at left, during the first half of an NCAA college football game in Raleigh, N.C. King and the Hurricanes visit Duke on Saturday night in their first game since Nov. 14. (Ethan Hyman/The News & Observer via AP, Pool)

The Hurricanes travel to Duke on Saturday night for their first game since beating Virginia Tech on Nov. 14. It’s the latest among multiple changes to the Atlantic Coast Conference schedule for the Hurricanes, who had spent recent weeks dealing with positive COVID-19 tests and quarantines.

“These kids want to play. They want to finish the season,” Miami coach Manny Diaz said. “You don’t ever know ... with what we went through (with the virus) and what you see going on around the country.”

Miami (7-1, 6-1 ACC) was set to visit Wake Forest on Saturday, but the Demon Deacons recently paused football activities due to their own coronavirus concerns. The ACC revised the schedule Sunday for Duke to host Miami instead of Florida State this weekend.

Miami is trying to keep alive its slim hopes of reaching the ACC title game. The Hurricanes must win out and see Clemson lose at Virginia Tech this weekend for Miami to meet No. 2 Notre Dame.

It’s easy to see how Miami might not be razor-sharp Saturday night, too, considering it's had essentially two weeks away from football amid coronavirus issues along with players having exams this week.

“The players have to understand that there’s adversity, more of a difference in preparation for this game than any other game that they’ll ever play or that I’ve ever been a part of,” Diaz said.

Like Miami, the Blue Devils (2-7, 1-7) played just twice in November. Their Nov. 21 game against Wake Forest was canceled amid the Demon Deacons’ combination of positive tests, quarantines and injuries. Duke lost 56-33 at Georgia Tech last weekend.

“We’ve been healthy all year, we’ve been available,” Duke coach David Cutcliffe said. “And I think that’s part of what’s happened: a lot of people have had a lot of issues with COVID-19. So we’re up and ready, and our team enjoys the challenges and the opportunities to play.”

Some other things to know about Saturday’s Miami-Duke game:

Miami could get several chances to break out its turnover chain considering Duke has been the nation’s worst team at protecting the football. The Blue Devils have lost 30 turnovers, at least six more than any other Bowl Subdivision team.

The elimination of divisions for this season created some ACC schedule quirks, and adding this game is just another example.

By sending Miami to Duke this year, it raises the chance that the Hurricanes will go to Durham in three consecutive seasons -- they lost there last year in their regular-season finale and the current grid for the 2021 schedule has Miami visiting again.

Still, it’s not unheard of; Virginia played at Miami in 2019, went back this season and is slotted to again next fall.

In a rare step for Miami, the Hurricanes are openly campaigning for quarterback D’Eriq King in the Heisman Trophy race. The school has even added a section devoted to King’s Heisman hopes on its website, the first time a player has gotten such a push by Miami officials.

Miami hasn’t had a top-three Heisman finisher since Ken Dorsey was third in 2001.

This is the second regular-season game for Duke in December in the last 59 seasons; the other in that span was a 59-31 loss at Clemson on Dec. 1, 2001. That game was to have been played in September and was rescheduled after the Sept. 11 terrorist attacks that year.

Miami’s last December regular-season contest was Dec. 4, 2004, a 16-10 home loss to Virginia Tech in a game that decided that season’s ACC championship.

Miami hosts North Carolina on Dec. 12 followed by Georgia Tech on Dec. 19, though that game won't be played if the Hurricanes qualify for the ACC championship game.

“Just due to all this COVID going on, you really don't know who you're going to play, especially towards the end with all the cancellations that's going on," Duke receiver Jarett Garner said.