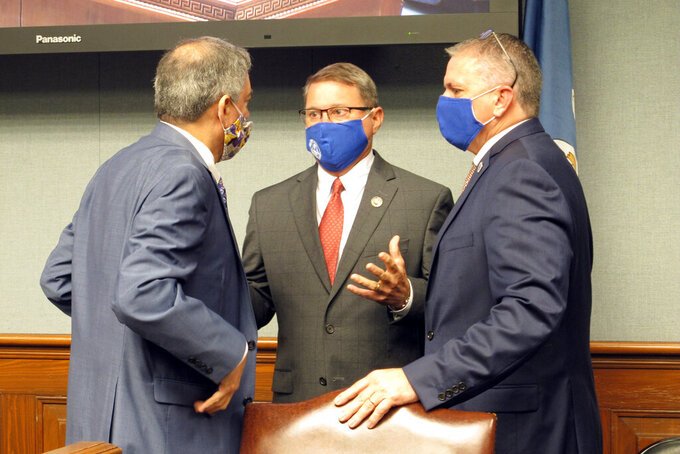 The House unanimously gave final passage Tuesday to a package of measures by Senate President Page Cortez and Sen. Mike Reese, both Republicans, that will keep the unemployment benefits and tax rates on businesses that pay into the fund at the status quo through 2021.

The Senate already had unanimously agreed to the proposals, so Tuesday's votes were the last needed.

However, lawmakers haven't found a long-term fix to refilling the fund that topped $1 billion in March and was drained as hundreds of thousands of people lost their jobs during the pandemic. Louisiana, like many other states, is borrowing money from the federal government to pay jobless benefits.

Without action from lawmakers, the emptying of the trust fund would have required businesses to pay more taxes into the fund to refill it. Meanwhile, benefits to jobless workers — which at a maximum of $247 per week are already among the nation’s lowest — would have fallen to the country’s bottom rate of $221 a week.

Lawmakers argued businesses and out-of-work residents struggling in the coronavirus outbreak shouldn't be further penalized. Beaullieu said the move will save businesses $60 million in taxes. Lawmakers said the delay of tax hikes and benefit drops will buy some time for the Democratic governor and Republican legislative leaders to find a long-term plan for returning the trust fund to solvency and repaying the government loans.

Edwards and lawmakers are hoping Congress will intervene to help states after the November election.

Tuesday's completion of the unemployment trust fund plans was among the first major issues to be settled in the special session, which must end Oct. 27. Lawmakers also gave final passage later Tuesday to a bill that would give themselves more ability to loosen Edwards' coronavirus restrictions, though that could face a veto from the governor.

Nearing final passage is a proposal to give lawmakers more authority over emergency elections plans — an outgrowth of the dispute over the plan being used for the fall elections.

Senate Republican leader Sharon Hewitt sought to remove the governor's authority to veto any emergency elections plan submitted by Louisiana's secretary of state. That concept passed the Senate, but ran into constitutional concerns in the House elections oversight committee.

The House and Governmental Affairs Committee rewrote the bill as proposed by Rep. Barry Ivey to retain the governor's veto authority — but to give lawmakers the ability to override a veto with a two-thirds vote by mailed ballot.

“I wanted to make sure we maintained the checks and balances,” said Ivey, a Baton Rouge Republican.

Hewitt, who oversees the Senate elections oversight committee, agreed to the rewrite.

“It does respect the separation of powers. It allows us to continue our roles in oversight,” she said.

Republican Secretary of State Kyle Ardoin supports the bill, and Ivey's changes seemed to alleviate some concerns from Democrats who objected to the previous version that passed the Senate. The House committee advanced the measure without objection to the full House.

The proposal comes after Ardoin offered an emergency plan for the Nov. 3 and Dec. 5 elections that won support from the majority-GOP House and Senate but was blocked by Edwards. The governor said the plan didn’t do enough to expand mail-in balloting for the pandemic. A federal judge later agreed with Edwards and required Ardoin to offer more absentee-by-mail balloting this fall.

The legislation is filed as Senate Concurrent Resolutions 5 and 9 and Senate Bills 20 and 55.