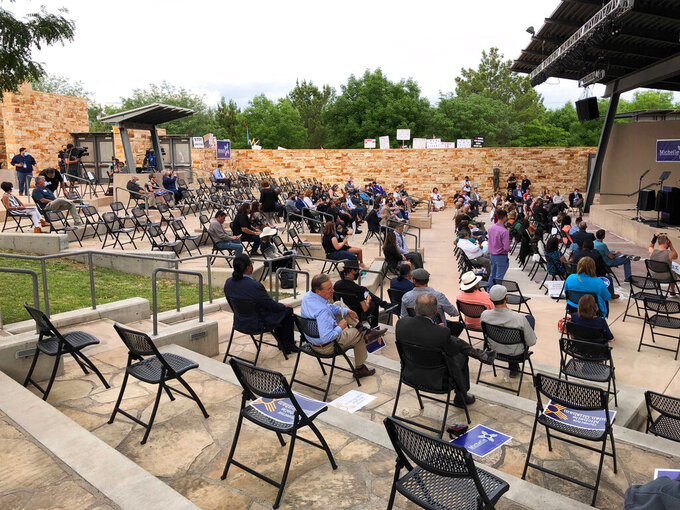 ALBUQUERQUE, N.M. (AP) — Gov. Michelle Lujan Grisham revved up her campaign for reelection in 2022 with an opening rally at an outdoor museum amphitheater, where the sound of protesters just outside threatened to drown out a series of public speakers.

Inside, the rally displayed a unified front in support of the governor among top Democratic elected officials, from Attorney General Hector Balderas to the two top ranked legislators in the state House and Senate. Aside from members of her Cabinet, other prominent Democrats and some Native American leaders, the venue never filled up and many seats were left empty.

A few dozen protesters gathered outside the Albuquerque Museum and took aim at Lujan Grisham’s mask mandate and pandemic-related public health orders. A sign said, “Governor, we are not your subjects.”

Chants, sirens and cries of “lock her up” — a chant that has targeted Democrats in the past, including Hillary Clinton — threatened to drown out the speakers.

“No amount of noise will intimidate,” Lujan Grisham said in brief comments, shouting over the ruckus. “Be proud you are a Democrat, believe in science, put New Mexicans first, and keep investing in building a better state.”

Democratic Party Chairwoman Jessica Velasquez urged people watching the speech in person and online to match each bullhorn burst from protesters with donations to the governor's reelection campaign.

“She answered with courage and because of that, how may lives have been saved," she said.

Outside, a man on a bullhorn asked, “Who wants to impeach the governor?” Protesters responded with cheers.

Lujan Grisham has been lambasted over the past year for her response to the pandemic, which has included some of the most stringent public health orders in the nation. Critics have ranged from business owners to parents concerned about the loss of classroom time and access to sports and other extracurricular activities.

Early contenders for the Republican nomination to take on Lujan Grisham in 2022 include Sandoval County Commissioner Jay Block.

The last incumbent governor to lose reelection in New Mexico was Democrat Bruce King, who was defeated in 1994 by then-Republican Gary Johnson.

Invitations to watch the Thursday evening event went out to campaign supporters, touting the Democratic governor's accomplishments on issues ranging from tax policy to recreational cannabis since taking office in January 2019.

But Lujan Grisham's Cabinet officials are confronting criticism over an estimated $250 million overpayment of unemployment benefits amid limited oversight of fraudulent claims, the use of an auto-deleting messaging app at the state's child welfare agency and missed deadlines for the state to receive federal education funds.

Lujan Grisham signed legislation this year that expands two kinds of tax benefits for working and low-income families, along with a one-time $600 income tax credit or rebate to low-income workers. That relief is estimated at about $185 million in its first year.

Newly signed marijuana reforms will establish legal cannabis sales by April 1, 2022. Starting June 29, people 21 and over can legally possess up to 2 ounces (56 grams) of marijuana.

There is no indication that Lujan Grisham will have Democratic challengers for her party's nomination.

However, political observers noted that the outcome in a district that has been controlled by Democrats for more than a decade won't automatically translate to the rest of the state, where conservative Hispanic Democrats, independent voters and rural residents can swing elections.

Lonna Atkeson, a political science professor at the University of New Mexico, said historical trends also point to more Republican governors being elected nationally during the midterm and that presidential approval ratings and Lujan Grisham's own approval among New Mexico residents will play a role.

“It’s hard to know what’s going to happen there,” Atkeson said. “In the next six months, we could see some real inflation or we could have a crisis in manufacturing and depending on how long that takes to run its course, those big picture items could be very harmful to her.”

Atkeson also acknowledged frustration over the pandemic, noting that the pace of economic recovery will likely be a consideration for voters next year if the effects continue to linger.