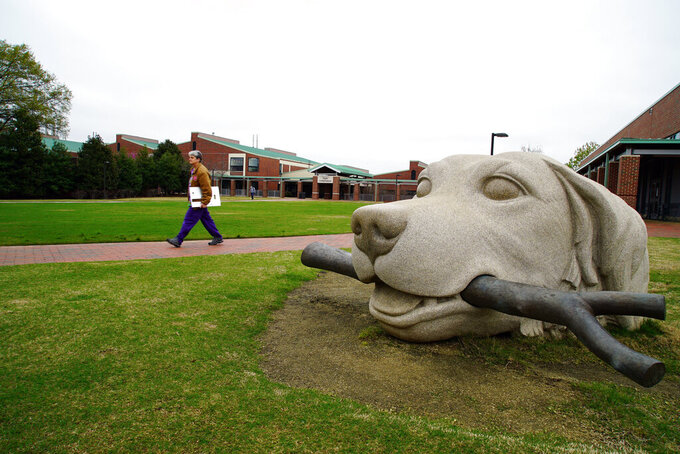 FILE - In this March 24, 2020 file photo, a woman walks past a dog sculpture on the campus of the North Carolina State University College of Veterinary Medicine in Raleigh, N.C. North Carolina public health officials have reported the state's first confirmed coronavirus case in a dog. The Department of Health and Human Services says there is an ongoing investigation into the cause of death. The department said the dog was taken to the N.C. State Veterinary Hospital on Aug. 3 with respiratory issues and died later that day. (AP Photo/Allen G. Breed, File)

The Department of Health and Human Services said in a news release that it is the state's first confirmed positive case in a dog. The department said the dog was taken to the N.C. State Veterinary Hospital on Aug. 3 after showing signs of respiratory distress and died later that day.

The National Veterinary Services Laboratories, which reviewed samples taken from the dog, confirmed that the dog tested positive for the virus that causes COVID-19 in humans.

Asked whether the dog died from the virus, department spokeswoman Kelly Haight Connor said an investigation into the cause of death was ongoing.

The person who brought the dog in for a coronavirus test told veterinary staff that a family member had previously tested positive for COVID-19.

State officials declined to release further information about the dog and its owner, citing patient confidentiality.

Health officials say the risk of spread from pets to humans is minimal.

“Based on the information available, the risk of animals spreading the virus to people is considered to be low,” said a statement from Dr. Carl Williams, state public health veterinarian.