North Korea ends party meeting with calls for nuclear might 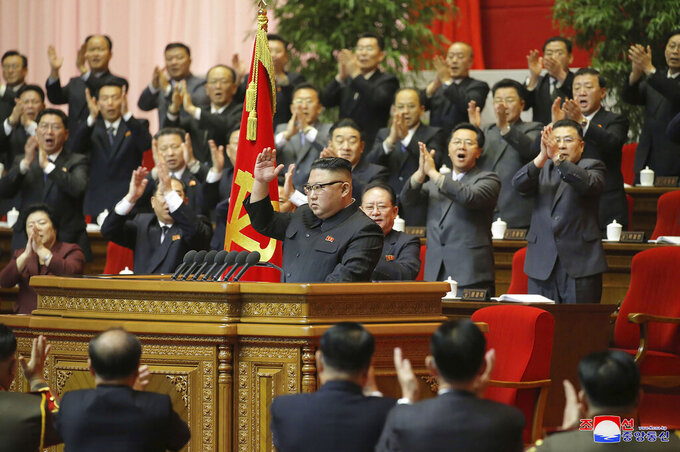 In this photo provided by the North Korean government, North Korean leader Kim Jong Un, center, acknowledges to the applauds after he made his closing remarks at a ruling party congress in Pyongyang, North Korea Tuesday, Jan. 12, 2021. Kim vowed all-out efforts to bolster his country's nuclear deterrent during the major ruling party meeting where he earlier laid out plans to work toward salvaging the broken economy. Independent journalists were not given access to cover the event depicted in this image distributed by the North Korean government. The content of this image is as provided and cannot be independently verified. Korean language watermark on image as provided by source reads: "KCNA" which is the abbreviation for Korean Central News Agency. (Korean Central News Agency/Korea News Service via AP)

Separately, Kim’s powerful sister criticized South Korea’s military for saying it had seen an apparent military parade taking place in Pyongyang. Kim Yo Jong, who was described last year as being in charge of inter-Korean relations, said in a statement Wednesday that such close tracking proved Seoul’s “hostile approach” toward its rival.

The eight-day Workers’ Party congress that ended Tuesday came as Kim Jong Un faces what appears to be the toughest moment of his nine-year rule.

Pandemic-related border closures and floods and typhoons that wiped out summer crops further shocked an economy already devastated by mismanagement and U.S.-led sanctions over his nuclear weapons program.

“We must further strengthen the nuclear war deterrent while doing our best to build up the most powerful military strength,” Kim said during his closing remarks at the congress, which were published by state media.

Kim said the country must “continue to give fresh spur” in making the military more elite and powerful so that it could cope with “any form of threat and emergency.”

“The hostile forces will try to check our advance more frantically, and the world will watch how the political declaration and fighting program of our (party) are realized,” he said.

Kim also called for reasserting greater state control over the economy, boosting agricultural production and prioritizing the development of chemicals and metal industries in a five-year plan. Outside experts say such sectors would be crucial to North Korean hopes to revitalize industrial production that has been decimated by sanctions and halted imports of factory materials amid the pandemic.

South Korean intelligence officials and analysts have said there are signs that the North is taking dramatic steps to strengthen government control over markets, including suppressing the use of U.S. dollars and other foreign currencies.

Such measures, which are apparently aimed at forcing people to exchange their foreign currency savings for the North Korean won, demonstrate the government’s sense of urgency over its depleting foreign currency reserves, said Lim Soo-ho, an analyst at a think tank run by Seoul’s spy agency.

Foreign currencies have been broadly used in both trade and private market transactions in North Korea since 2009 when a botched currency revaluation under the rule of Kim’s father sparked hyperinflation and public unrest.

The KCNA said the North will convene its rubber-stamp parliament on Sunday to adopt the decisions made by the congress into law.

The economic setbacks have left Kim with nothing to show for his high-stakes summitry with President Donald Trump. Their diplomacy deteriorated after the collapse of their talks in Vietnam in February 2019, when the Americans rejected North Korea’s demand for major sanctions relief in exchange for a partial surrender of its nuclear capabilities.

During the congress, Kim doubled down on his ambitions to expand the North’s nuclear capabilities and announced plans to develop more sophisticated military assets, including longer-range missiles that could potentially target the American homeland, new tactical nuclear weapons, nuclear-powered submarines, spy satellites and hypersonic weapons.

It's unclear whether the North is fully capable of acquiring such systems. While the country is believed to have accumulated at least dozens of nuclear weapons, outside estimates on the exact status of its nuclear and missiles programs vary widely.

In comments that were apparently aimed at pressuring the incoming Biden administration, Kim labeled the United States as the North’s “principal enemy” and said the fate of bilateral relations would depend on whether Washington discards what Pyongyang perceives as hostile policies.

Kim during the congress was also named as the ruling party’s general secretary, a title formerly held by his late father and grandfather, in a move apparently aimed at further bolstering his authority.

Seen as the most powerful woman in North Korea, Kim Yo Jong has come in and out of prominence under her brother’s rule.

South Korea’s Joint Chiefs of Staff had said Monday that it had obtained intelligence showing a North Korean military parade in Pyongyang on Sunday night and was checking whether it was an official event or a rehearsal.

“We are only holding a military parade in the capital city, not military exercises targeting anybody nor launch of anything. Why do they take trouble craning their neck to follow what’s happening in the (North)?,” Kim Yo Jong said.

“The (South Koreans) are a truly weird group hard to understand. They are the idiot and top the world’s list in misbehavior as they are only keen on things provoking world laughter.”

North Korean state TV has not shown a military parade as of Wednesday morning. During its last military parade in October, the North unveiled a series of new strategic weapons, including what appeared to be its biggest-yet intercontinental ballistic missile.