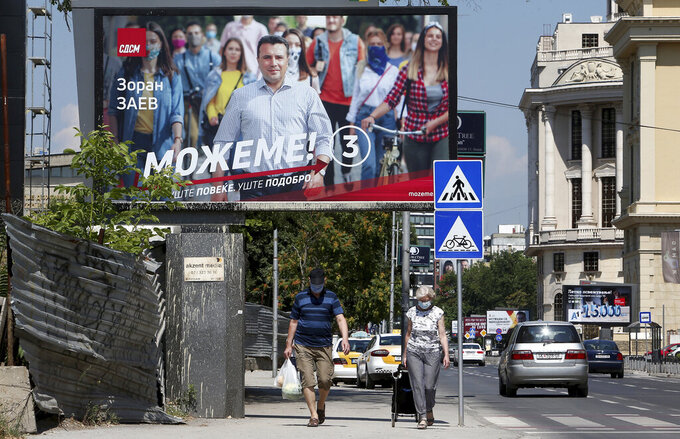 A couple wearing face masks to protect against coronavirus, walk under an electoral poster of the leader of the ruling Social Democrats Zoran Zaev, in a street in Skopje, North Macedonia on Saturday, July 11, 2020. North Macedonia holds its first parliamentary election under its new country name this week, with voters heading to the polls during an alarming spike of coronavirus cases in the small Balkan nation. (AP Photo/Boris Grdanoski)

SKOPJE, North Macedonia (AP) — Election officials in North Macedonia carried ballot boxes to the homes of voters suffering from COVID-19 or in quarantine Monday, at the start of three days of voting in a general election that was delayed for months by the pandemic.

Wearing white coveralls and other protective gear, the officials were visiting the homes of some 700 people who registered to vote in the pandemic but were unable to travel to polling stations. It is the first time elections have been held on a weekday, with the date set after the original April 12 vote was postponed due to the pandemic.

After the delays, special provisions were made for those quarantined due to the virus. Of the roughly 5,000 people quarantined, just over 700 have registered to vote. Prison inmates, the elderly and the ill vote on Tuesday before the polls open Wednesday.

North Macedonia is holding its first parliamentary election under its new country name, with voters heading to the polls during an alarming spike of coronavirus cases in this small Balkan nation.

The country has been run by a caretaker government since January following the resignation of Prime Minister Zoran Zaev after the European Union failed to set a date for North Macedonia to begin accession talks. Parliament elected a temporary government consisting of members of both main parties, with the sole aim of organizing the election.

Opinion polls in the run-up to Wednesday’s vote indicate a close race between coalitions led by the former governing Social Democrats and the center-right opposition VMRO-DPMNE party. The opposition is eager to return to power after losing the last election in 2016 following a decade running the country.

Due to the coronavirus outbreak, the Social Democrat-led coalition “Mozeme” (We Can) and the VMRO-led coalition “Obnova” (Renewal) are campaigning mostly through small gatherings and video messages.

The caretaker government handled the coronavirus outbreak relatively well until May, imposing a lockdown that kept the number of infections and deaths low. But after authorities eased restrictions and opened the borders, North Macedonia saw an increase in new cases and deaths that have placed it among the most badly affected European nations in terms of the number of deaths and confirmed cases per capita.

With more than 8,000 infected people and about 380 deaths in this country of around 2 million people by Sunday, the pandemic and its devastating economic consequences have become the main election issue. The opposition accuses Zaev’s party of being unable to deal with the outbreak or pull the country out of recession.

North Macedonia is one of the poorest countries in Europe with a per-capita GDP of about $6,100. About a half of its 2 million people live on the brink of poverty.

Polls suggest neither party will win the 61 seats needed in the 120-member parliament to be able to govern alone, meaning a coalition government with a smaller ethnic Albanian party is likely. A total of 15 parties and coalitions are running.

Zaev, the Social Democrat leader, has touted his success in securing the country’s NATO membership after sealing a historic 2017 deal with neighboring Greece over the country’s name. Greece had been blocking the country’s NATO accession for three decades, objecting to the use of the name “Macedonia” which it said harbored expansionist claims on its own province of the same name.

Zaev also signed a friendship deal with Bulgaria, part of a push to resolve issues with neighboring countries and prepare for EU membership.

The Social Democrats beat the populist conservative VMRO-DPMNE party in 2016 after a decade of autocratic rule by its then-leader Nikola Gruevski, who fled to Hungary to avoid serving a two-year jail sentence for abuse of power and corruption. Hungary granted him political asylum and North Macedonia is seeking his extradition.

Gruevski’s successor, Hristijan Mickoski, moved VMRO-DPMNE toward the center-right and is appealing to voters disappointed with the country’s name change and the deal with Bulgaria. He also accuses the Social Democrats of corruption, influencing the judiciary, nepotism and destroying the economy.

“These are elections when we decide on the future of our families, elections in which we need to make our ancestors proud,” Mickoski said during a recent television debate with Zaev. “The choice now on July 15 is between injustice, humiliation, and on the other hand justice and dignity.”

The Social Democrats point to their success in achieving NATO membershipm and promise EU accession and a revival of the economy with billions in foreign investments.

“We have proved that North Macedonia could be a friend with everybody, made smart deals that brought the country into NATO and enabled a green light for the start of accession talks with the EU after 15 years,” Zaev said.

If neither party wins enough seats to form a government, the largest ethnic Albanian party, the Democratic Union for Integration, or DUI, is the most likely coalition partner.

DUI has been in coalition governments for the past 18 years, and now says it is “high time” for an ethnic Albanian to head the government.

Its slogan “Pse Jo?” (Why not?) was chosen to challenge the last “remaining ethnic taboo” of an ethnic Albanian being named prime minister. DUI has already chosen a long-retired politician for the post.

Ethnic Albanians make up about a quarter of North Macedonia’s population. They took up arms against government forces in 2001, and the six-month conflict ended with a Western-brokered deal granting them greater minority rights, including making Albanian the country’s second official language.

Over 1.8 million people are eligible to vote at nearly 3,500 polling stations. About 2,000 domestic and 130 international observers will monitor the process.

Masks are compulsory during voting, and a two-meter distance must be kept from election officials. Authorities are assuring voters the process will not endanger their health.