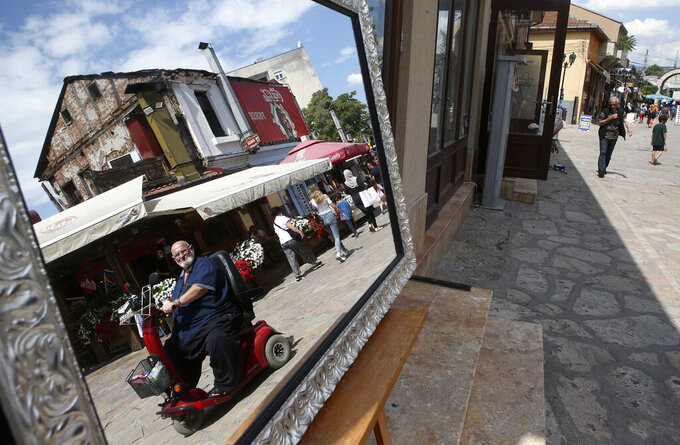 A reflection of a man riding an electric vehicle is pictured in a displayed mirror in the Old Bazaar in Skopje, North Macedonia on Thursday, July 16, 2020. The pro-Western SDSM party in North Macedonia is poised to try to form a coalition government following a narrow election victory. (AP Photo/Boris Grdanoski)

SKOPJE, North Macedonia (AP) — North Macedonia’s pro-Western Social Democrats said Thursday they were ready to start complicated power-sharing negotiations after winning a narrow election victory in a poll held up for months by the COVID-19 pandemic.

But main conservative rivals VMRO-DPMNE were less than two percentage points behind and insisted they could ultimately prevail in coalition negotiations and form a government.

According to final results announced late Thursday, Zaev’s Social Democrats won 46 seats in the 120-member parliament, well short of the 61 needed to govern alone. The conservatives got 44 seats.

Coalition talks will involve parties representing the ethnic Albanian minority, which makes up nearly a quarter of the country’s 2.1 million population. The main minority party, the DUI, which won 15 seats in parliament, says it wants an ethnic Albanian politician as prime minister as a condition for coalition talks — a demand that both main parties have flatly rejected.

International observers, announcing the preliminary findings of their monitoring mission, described the election as being “well-managed.”

The election involved two days of advance voting due to the pandemic and follows a spike in cases. Authorities Thursday announced 94 new infections and eight deaths, raising the confirmed death toll to 401.

Zaev, 45, led the country’s effort to end a decades-long name dispute with neighboring Greece, clearing the way for the former Yugoslav republic to join NATO earlier this year.

Political analyst Albert Musliu told the AP that power-sharing negotiations, which are expected to last several weeks, are likely to be complicated.

“We’ll have to wait for the final results because even a small difference between political parties could make essential changes to the upcoming negotiations,″ he said.

Surrounded by party officials wearing protective masks, Zaev told supporters at a post-election gathering: “You are winners, be proud. Progress has won.” He promised to continue the country’s push to join the European Union.

The Party of European Socialists congratulated Zaev on Thursday, along with Greece’s former left-wing prime minister, Alexis Tsipras, who negotiated the landmark 2018 agreement that eased years of animosity between the two neighbors.