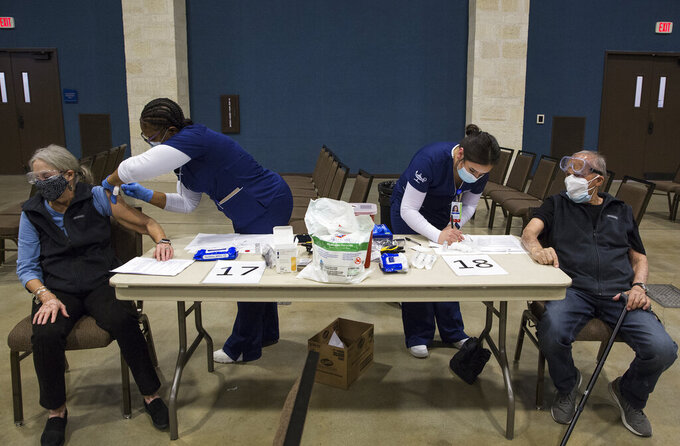 Rosilin Maxwell receives the Moderna coronavirus vaccine from nurse Tyronda Allen as her husband, Jimmy Maxwell, waits for her after also receiving the vaccine from nurse Keana Cain during the mass vaccination clinic at the New Braunfels Civic/Convention Center in New Braunfels, Texas on Thursday, Jan. 21, 2021. (Mikala Compton/Herald-Zeitung via AP) 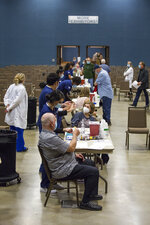 DALLAS (AP) — A North Texas congressman tested positive Thursday for the illness caused by the ongoing coronavirus outbreak, according to a statement.

Rep. Ron Wright, a 66-year-old Arlington Republican, said in the statement issued by his office that he was informed of his positive test results Thursday morning after he was exposed to an infected person last week. He was quarantined since Friday and will remain quarantined until doctors give him the all-clear, he said.

He was experiencing minor symptoms, he said, but felt good in general and would continue to work from quarantine.

In Houston on Thursday, Patrick said at a news conference that while mistakes on the vaccine rollout have been made at the state and local level, “Everyone is trying to do the best they can.”

When asked about what is being done to get vaccines into underserved neighborhoods and communities in Texas, Patrick said that is up to cities and counties.

“We can’t control every dose in every neighborhood, every street from the state level,” he said. “That’s where you get your mayors and your county judges and they have to be communicating to the public. If they’re only getting 50,000 doses, then allocate those in a straightforward way that takes care of folks and don’t fill them with false hope.”

That would appear to contradict the state's demand that Dallas County commissioners rescind a plan to grant residents in underserved ZIP code areas priority for vaccinations. The plan, which commissioners approved Tuesday, was rescinded at an emergency commissioners meeting.

Meanwhile, newly report deaths that continue to run at record levels have pushed the Texas death toll for the pandemic to 33,285. The 21,422 newly reported COVID-19 raised the pandemic count to close to 2.2 million, according to the Texas Department of State Health Services. Of those, 13,564 COVID-19 patients are hospitalized, but 376,769 cases are active.