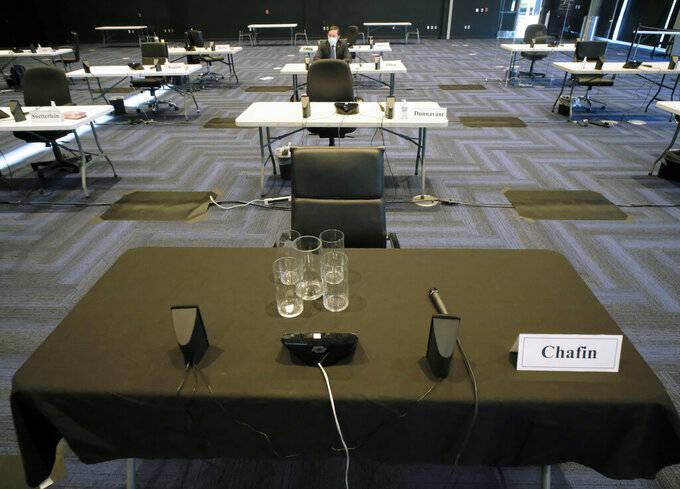 State Sen. Todd Pillion, R-Washington, rear, sits at his sat before the Senate convened where he delivered his eulogy of his friend, the late Sen. Ben Chafin, R-Russell, black draped desk, foreground, when members of the Virginia Senate met for opening day of the General Assembly inside the Science Museum in Richmond, Va., Wednesday, Jan. 13, 2021. Chafin died on Jan. 1 due to complications related to the coronavirus. (Bob Brown/Richmond Times-Dispatch via AP) 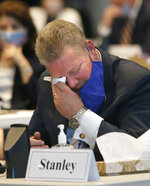 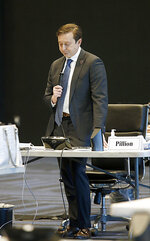 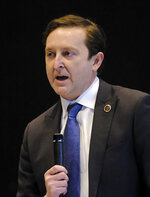 RICHMOND, Va. (AP) — Democratic Virginia Gov. Ralph Northam outlined his plans to legalize marijuana and announced his intention to give teachers a raise Wednesday during an annual address to state lawmakers.

The governor gave his State of the Commonwealth speech on the first day of the 2021 legislative session, saying it's time to legalize a drug many other states already have and to take better-than-expected revenues and put them toward a boosting teacher pay.

“Tonight I have good news: revenues look good, and we’re going to have more money than we thought,” Northam said.

Northam has a lengthy list of priorities as he enters his final year in office, with a heavy focus on addressing long-standing racial disparities in a state that was once home to the capital of the Confederacy and the “massive resistance” policy to public school integration. His fellow Democrats remain in full control of the General Assembly after flipping the chamber in the 2019 elections.

On Wednesday he unveiled his plan to legalize sales of marijuana by 2023, taxing it at 21%, and use the revenues to fund things like early education for at-risk children and minority scholarships.

“Reforming our marijuana laws is one way to ensure that Virginia is a more just state that works better for everyone,” Northam said.

Northam also addressed his support for legislation that would end the death penalty in Virginia, saying, “when we all agree that a crime deserves the strongest punishment we can give, it’s still vital to make sure our criminal justice system operates fairly and punishes people equitably. We know the death penalty doesn’t do that.”

Virginia has executed nearly 1,400 people in its long history, more than any other state, according to the Death Penalty Information Center. But executions have slowed in Virginia in recent years, and no death sentences have been imposed in the state since 2011. Only two men are on the state’s death row. Their sentences would be changed to life in prison without parole under the legislation.

Northam spoke to a mostly empty state House chamber, as lawmakers are holding the session away from the Capitol this year because of the surging coronavirus pandemic.

In response to Northam's remarks, Republicans blasted him for how the state has handled the coronavirus pandemic, including the vaccine rollout plan. GOP lawmakers said their priorities this session would include boosting support for law enforcement and pushing to get schools back to offering in-person instruction.

"It is time for Virginia's public schools to reopen," said Del. Kirk Cox, who is also running for governor. Northam is term-limited and cannot seek re-election.

The session started kicked off officially at noon, with the House of Delegates meeting remotely while the state Senate gathered at an event center more than 2 miles (3 kilometers) away from the state Capitol.

The Senate began the day with a moment of silence for Sen. Ben Chafin, a southwest Virginia GOP lawmaker who died at the start of this year due to complications related to the coronavirus.

Lawmakers then passed a resolution celebrating Chafin’s life, giving speeches in honor of a man widely admired for his collegiality and entertaining, heartfelt floor speeches.

“Whether you were for him or against him on a bill, it didn’t matter. Ben was going to treat you as a friend,” said Sen. John Cosgrove, a fellow Republican who said he “just plain lost it” when he learned of Chafin’s death.

Chafin’s desk sat empty, draped in black fabric, and lawmakers each placed a red rose in vases atop it.

Lawmakers then wasted no time in moving on to partisan squabbling over the length of the session. Republicans said the usual 45-day session was unnecessary and were able to limit the session to 30 days. Northam can effectively extend it by by calling a special session.

Northam also called for a constitutional amendment that would automate the restoration of the right to vote for people with a felony conviction who have completed their sentence.

“If we want people to return to their communities and participate in society, we need to welcome them back fully. It’s wrong to keep punishing people forever,” he said.