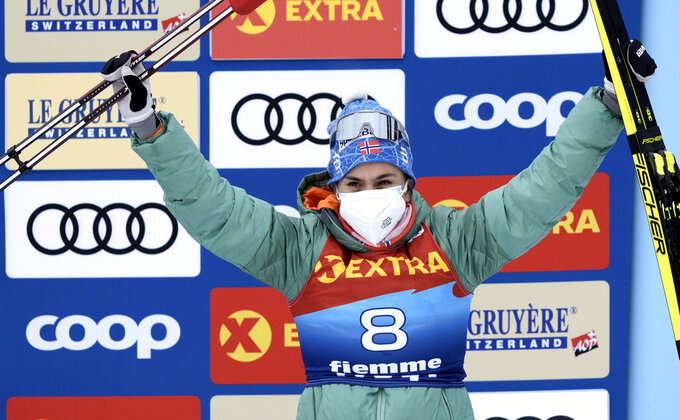 FILE - Norway's Heidi Weng celebrates on the podium after winning the women's Mass Start Free 10km event at the Tour de Ski in Val di Fiemme, Trento, Italy, on Jan. 4, 2022. Two members of Norway’s women’s cross-country team, Heidi Weng and Anne Kjersti Kalvaa, have tested positive for the coronavirus ahead of next month's Beijing Olympics. They contracted COVID-19 at a training camp in the Italian Alpine resort of Seiser Alm and are now isolating. (AP Photo/Giovanni Auletta, File)

OSLO (AP) — Two members of Norway's women's cross-country ski team have tested positive for the coronavirus ahead of next month's Beijing Olympics, the team said Wednesday, as other countries also face tense waits to see whether their own infected athletes can recover in time.

Swiss hockey players, Russian bobsledders and German skeleton sliders are among other would-be Olympians facing a nervous wait. Also on that list: U.S. bobsledder Josh Williamson, who revealed a positive test Wednesday and will not accompany his teammates on their Thursday flight to China — though he remains hopeful of getting to the Games in plenty of time to compete.

Heidi Weng, a two-time overall World Cup champion, and Anne Kjersti Kalvå contracted COVID-19 at a training camp in the Italian Alpine resort of Seiser Alm and are now isolating.

Norwegian cross-country manager Espen Bjervig said in a video call their participation in the Olympics was uncertain.

Team doctor Øystein Andersen said Italian rules mean that Weng and Kalvå will be in isolation for 10 days, until Feb. 3. The opening ceremony is on Feb. 4 and the Olympic cross-country skiing program starts the next day.

“This is a shocking situation,” Andersen said.

Weng is the top-ranked Norwegian and a five-time world champion.

“We have a reserve in the squad, and we also have other athletes who are accredited and can be ready," Bjervig said of possible replacements. "But basically now the focus is on looking at the opportunities for those who have been taken out.”

Norway is the leading nation in cross-country skiing, with its women's team winning three of the six events on the program at the 2018 Pyeongchang Games.

The team had planned to leave for Beijing on Thursday but will now be delayed.

The entire men's team is also in isolation in Seiser Alm after head coach Arild Monsen tested positive for COVID-19 after returning to Norway on Monday.

All eight team members were defined as a close contact of Monsen and were awaiting the results of PCR tests. They are now scheduled to depart for Beijing on Monday.

Some U.S. athletes leave on Thursday and Williamson was planning to be on that charter. He will have to wait at least a few days before reaching what would be his first Olympics.

“This has not been an easy pill to swallow," Williamson said.

China imposes strict restrictions on all arrivals, but especially on people who recently had the virus. They are required to supply proof of five recent negative test results since the infection. All athletes will be tested each day they are in China, too.

Switzerland said two of its women's hockey players won't fly out with their teammates to Beijing on their scheduled flight Wednesday following virus tests. The Swiss Olympic team said some results for Alina Müller and Sinja Leemann in recent days were over the threshold for entry into China, but said it hoped they could take a later flight and join the team in time for its opening game against Canada on Feb. 3.

There have been four virus cases on the Russian Olympic team this week. Nikita Tregubov, the skeleton silver medalist in 2018, tested positive after attending the same camp as the bobsledders. Figure skater Mikhail Kolyada tested positive and was replaced on the team Tuesday after feeling unwell.