Not in short supply: Blame for EU's rusty vaccine rollout 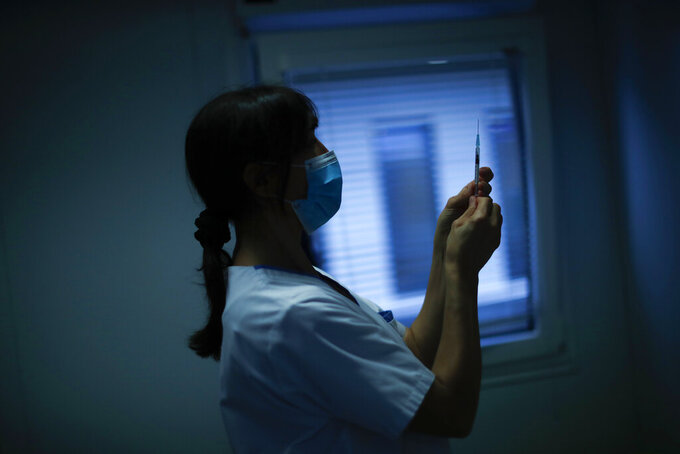 A nurse prepares a syringe with Pfizer/Biontech COVID-19 vaccine as medical workers are vaccinated at the MontLegia CHC hospital in Liege, Belgium, Wednesday, Jan. 27, 2021. The 27-nation EU is coming under criticism for the slow rollout of its vaccination campaign. The bloc, a collection of many of the richest countries in the world, is not faring well in comparison to countries like Israel, the United Kingdom and the United States. (AP Photo/Francisco Seco)

APELDOORN, Netherlands (AP) — Jos Bieleveldt had a spring in his step when the 91-year-old Dutchman got a coronavirus vaccine this week. But many think that was way too long in coming.

Almost two months before, Britain's Margaret Keenan, who is also 91 now, received her shot to kick off the U.K.'s vaccination campaign that has, so far, outstripped the efforts in many nations in the European Union.

“We are dependent on what the European Commission says we can, and cannot, do. As a result, we are at the bottom of the list, it takes far too long," Bieleveldt said of the executive arm of the EU, which, perhaps unfairly, has taken the brunt of criticism for a slow rollout in many of its member states. Onerous regulations and paperwork in some countries and poor planning in others have also contributed to the delay, as did a more deliberate authorization process for the shots.

Overall, the 27-nation EU, a collection of many of the richest countries in the world — most with a universal health care system to boot — is not faring well in comparison to countries like Israel and the United Kingdom. Even the United States, whose response to the pandemic has otherwise been widely criticized and where tens of thousands of appointments for shots have been canceled because of vaccine shortages, appears to be moving faster.

While Israel has given at least one shot of a two-dose vaccine to over 40% of its population and that figure in Britain is 10%, the EU total stands at just over 2%.

And it is not just EU citizens who are laying the blame at the bloc's door. Criticism is also coming from many nations that had hoped to see some live-saving liquid from the EU trickle through their borders.

Amid concerns that the richer nations had snapped up far more doses than they needed and poorer nations would be left to do without, the EU was expected to share vaccines around.

The rocky rollout is also testing the bloc's long commitment to so-called soft power — policies that advance its cause not through the barrel of a gun but through peaceful means, like through the needle of a syringe.

“Today it’s harder to get the vaccines than nuclear weapons,” said Serb President Aleksandar Vucic, who had been counting on a lot more help from the EU.

Serbia sits at the heart of the Balkan region where the EU, Russia and even China are seeking a stronger foothold. Helping the Balkan countries with their vaccine rollout seemed an area where Europe, with its medical prowess and a willingness to prioritize such cooperation, would have an edge.

Vucic said weeks ago when he welcomed 1 million doses of Chinese vaccines that Serbia had not received “a single dose” from the global COVAX system aimed at get affordable shots to poor and middle-income countries that the EU has championed and funded.

Instead, Vucic said Serbia secured vaccines through deals with individual countries or producers.

Rubbing salt in the wound, Vucic went for the EU's social conscience when he said this week that “the world today is like Titanic. The rich tried to get the lifeboats only for themselves ... and leave the rest.” Other nations on the EU's southeastern rim have also been critical.

It is a big turnaround from only a month ago when the EU's future looked pretty bright. It had just inked a last-minute trade deal with the United Kingdom, clinched a massive 1.8 trillion-euro pandemic recovery and overall budget deal and started rolling out its first COVID-19 vaccines.

“This is a very good way to end this difficult year, and to finally start turning the page on COVID-19,” EU Commission President Ursula von der Leyen said at the time.

By this past weekend, though, her attitude soured as it became clear that the bloc would be getting vaccines at a slower rate than agreed upon for its 450 million people.

AstraZeneca has told the EU that of its initial batch of 80 million, only 31 million would immediately materialize once its vaccine got approved, likely on Friday. That came on the heels of a smaller glitch in the deliveries of Pfizer-BioNTech shots.

Both companies say they are facing operational issues at plants that are temporarily delaying the rollout.

Italy is threatening to take legal action against both over the delay. Italian Premier Giuseppe Conte had been boasting that the country’s rollout was a huge success, especially when the millionth dose was given on Jan. 15. But after Pfizer announced the temporary supply reduction, Italy slowed from administering about 80,000 doses a day to fewer than 30,000.

Bulgaria has also criticized the drug companies, and some there have called for the government to turn to Russia and China for vaccines.

Hungary is already doing so. “If vaccines aren’t coming from Brussels, we must obtain them from elsewhere. One cannot allow Hungarians to die simply because Brussels is too slow in procuring vaccines,” Prime Minister Viktor Orban said. “It doesn’t matter whether the cat is black or white, as long as it catches mice.”

But supply isn't the only thing holding up the EU's campaign. The problem is partially that the EU Commission bet on the wrong horse — and didn't get enough doses of the early success vaccines like Pfizer-BioNTech. The commission notes there was no way of knowing which vaccines would succeed — and which would be first — and so it had to spread its orders out over several companies.

The EU rollout was also slowed because the European Medicines Agency took more time than the U.S. or U.K. regulators to authorize its first vaccine. That was by design as it made sure that the member nations could not be held liable in case of problems and in order to give people more confidence that the shot was safe.

Germany, Europe's cliche of an organized and orderly nation, was found sorely wanting, with its rollout marred by chaotic bureaucracy and technological failures, such as those seen Monday when thousands of people over 80 in the country’s biggest state were told they would have to wait until Feb. 8 to get their first shots, even as vast vaccine centers set up before Christmas languished empty.

“The speed of our action leaves a lot to be desired,” Chancellor Angela Merkel said. “Processes have often become very bureaucratic and take a long time, so we have to work on that.”

It is no different in France, where there is a Kafkaesque maze of rules to get consent for vaccinating the elderly.

In the Netherlands, which banked on the easy-to-handle AstraZeneca vaccine being the first available, authorities had to scramble to make new plans for the Pfizer-BioNtech vaccine, whose ultracold storage requirements make it more complicated.

“We were proven to be insufficiently flexible to make the change," said Health Minister Hugo de Jonge.

The Dutch have been particularly criticized since they were the last in the EU to begin vaccinations, more than a week after the first shots were given in the bloc, and they have been especially slow to roll doses out to elderly people living at home, like Bieleveldt, a retiree.

“I’m already playing in injury time in terms of my age," he said. "But I still want to play for a few more years.”