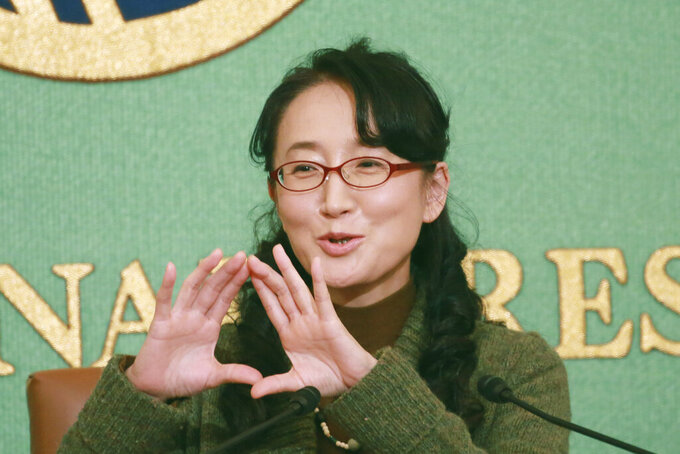 TOKYO (AP) — Yu Miri, who won this year’s National Book Award for translated literature, says Tokyo’s Ueno Park, where a homeless man kills himself in her award-winning story, looks very clean ahead of next summer's Olympics. Still, she says, that doesn't help to raise hope amid the coronavirus pandemic and the delayed recovery of the disaster-hit Fukushima region.

The park is a main setting of Yu's award-winning novel, “Tokyo Ueno Station,” in which the protagonist, Kazu, a seasonal worker from Fukushima, ended up. The elderly man first came to the Japanese capital a year before the 1964 Tokyo Olympics for construction work.

Yu said at a Tokyo news conference Wednesday that she visited the park recently and it was surprisingly clean, but that an area where she used to interview homeless residents for her book has largely been eliminated.

The book, first published in Japan in 2014, portrays the life of the seasonal worker without a place to go back — a theme for many of Yu's works.

The story was based on her interviews with homeless squatters living in huts made of cardboard boxes and blue plastic tarp more than 10 years ago. She said she was also inspired by about 600 Fukushima residents she interviewed while hosting a local radio program that she started a year after the March 2011 meltdowns at the Fukushima nuclear plant.

The triple meltdowns at the plant caused massive radiation leaks to the outside, contaminated the surrounding areas and displaced as many as 160,000 people from the no-go zones and elsewhere in the prefecture. Most of those places have been reopened as the government has tried to showcase the recovery ahead of the Tokyo Games, but those who returned to their homes are largely elderly people.

Many families, especially with small children, say they don't plan to return to their homes due to radiation concerns as well as loss of their former jobs and communities.

But their lives have significantly changed — for the worse — since Yu finished the book, with a growing sense of isolation among Fukushima residents amid preparations ahead of the Olympics, and the coronavirus pandemic that has made them more isolated, said Yu. She has since moved to Minamisoma, where she opened a book café in hopes of creating a place for locals to get reconnected after displacement due to the nuclear disaster.

“Both the nuclear accident and the coronavirus pandemic have revealed distortion and inequality in society,” Yu said.

“Many people see the situation through a lens of despair instead of a lens of hope,” she said. “Perhaps the story fit their thinking and that's probably why the book has been widely read."

She said disaster-hit areas have not recovered enough and preparations for the Olympics have taken away resources and jobs from the recovery projects, becoming part of the reasons delaying their reconstruction. “Organizers should have seen the level of progress of the reconstruction before deciding to host the Games," she said.

The Olympics, initially planned for July 2020, were postponed until next summer due to the pandemic.

Many of those Yu interviewed had worked as seasonal workers in Tokyo during Japan’s post-war economic advancement. When they finally came back to have an easy retirement life back in their hometown, they lost their homes in the Fukushima disaster. “A man told me it was back luck, and the word got stuck in my chest like a thorn,” she said.

Yu remembered another thorn she has had in her chest from her past conversation with a homeless man. He told her that those who possess the roof and walls don’t understand the feelings of those who don’t.

“So I wrote the story of how the man named Kazu lived and chose death, not from the outside but his inner self, thinking that perhaps I can convey how he felt to those who have places to go back,” she said. “As a novelist, my job is to play a role as an endoscope to look inside of a person, while also showing him or her with an external camera.”

Yu, an ethnic-Korean who was born and raised in Japan, writes in Japanese and has won a number of Japanese literature awards, including the prestigious Akutagawa Prize in 1997 for “Family Cinema."