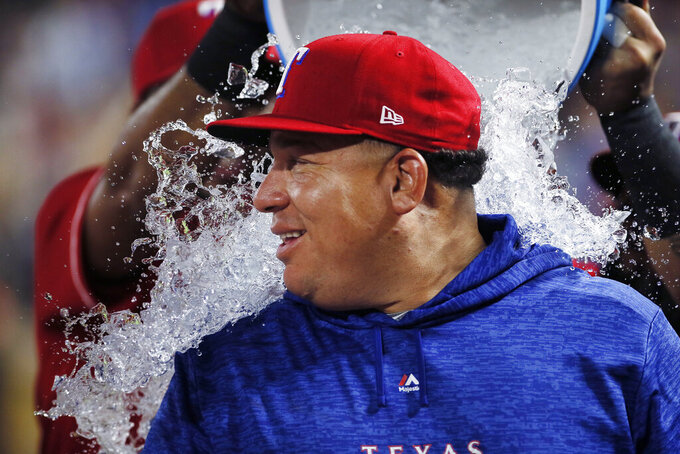 FILE - In this Aug. 7, 2018 file photo, Texas Rangers starting pitcher Bartolo Colon is doused after his 246th career win, the most by a pitcher born in Latin America, after the team's baseball game against the Seattle Mariners, in Arlington, Texas. With each day that passes without baseball activity, the chances that the Dominican, who celebrates his 47th birthday on Sunday, May 24, 2020, could pitch again in the Major Leagues diminishes. (AP Photo/Brandon Wade, File)

He craves one more shot in the majors.

“I’m not retired. That’s not in my mind,” Colón told The Associated Press in a phone interview. “I’m still hoping of reaching my goal of pitching 46 innings. I’ll sign with the first team who wants me.”

That’s the number of innings that will propel him to pass Hall of Famer Juan Marichal for the most by a Dominican pitcher.

Colón is aware that time is against him.

“I know this is not a sport for the old, it’s for the young,” Colon said. “I keep training. Even though I’m not playing right now, I tried to keep fit.”

Back in March, he was gearing up to pitch with the Monclova Acereros of the Mexican Baseball League. But their preseason was stopped when the outbreak forced the league to shut down, and a restart status is uncertain.

“I had to decide to stay in Mexico or get back to the Dominican Republic. I went to my country and they also have quarantines and curfews,” he said. “I’m still waiting. The Monclova people say they will tell me what will be happening with the season, depending on the virus.”

Colón is keeping busy these days promoting his recently released autobiography, “Big Sexy: In His Own Words.”

Yes, the title is the nickname that Noah Syndergaard, his rotation colleague during his time with the New York Mets from 2014-16, bestowed upon him.

Along with all of his wins, Colón provided fans with a lot of fun at the plate over his 21 seasons in the majors.

It’s been since four years since his unforgettable first and only home run, against James Shields of the San Diego Padres. There’s a good deal in the book devoted to his difficulties batting when he went to play in the National League with the Mets, his helmet comically flying when missing contact.

Colón said he learned to take in stride his strikeouts.

“I didn’t mind people laughing. Actually, I end it asking for a bigger helmet so it could fall,” he said.