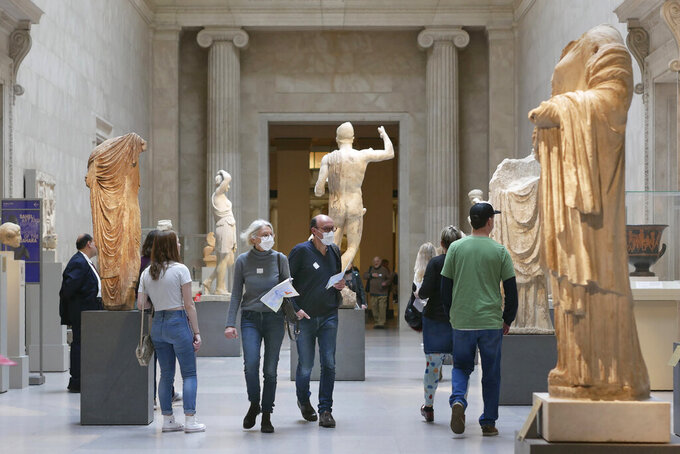 FILE - In this Tuesday, March 10, 2020 file photo, two visitors wear masks as they walk through the Metropolitan Museum of Art in New York. New York City won't open malls and museums Monday, July 20, 2020, even if the city is allowed to move into the next phase of reopening, as Gov. Andrew Cuomo promises more crackdowns on bars and restaurants. Of the Metropolitan Museum: "I think they can plan to reopen. And then we'll see what the facts say," Cuomo said. (AP Photo/Seth Wenig, File)

NEW YORK (AP) — New York City was cleared Friday to take the next step in its reopening next week, allowing movie and TV crews to film, zoos to welcome reduced crowds, professional sports teams to play to empty seats. Visitors are set to return to the island that houses the Statue of Liberty — but not the statue itself.

But malls, museums and restaurant dining rooms will stay shuttered in the nation's biggest city.

Gov. Andrew Cuomo announced that the city is set to begin a limited version of the fourth phase of the statewide reopening process starting Monday. But he warned that New York's progress is fragile as COVID-19 cases surge elsewhere in the country.

“I feel like we're standing on a beach and we're looking out at the sea and we see the second wave building in the distance, so I want all New Yorkers to be on high alert,” the Democratic governor told reporters during a telephone briefing.

New York City, which has seen the bulk of the state's confirmed coronavirus cases and deaths, began reopening June 8, after the rest of the state.

In the city’s scaled-down Phase 4, botanical gardens and zoos can reopen at 33% capacity, production of movies and TV shows can proceed and professional sports such as baseball can be played without fans in the stands, said de Blasio, a Democrat.

Meanwhile, the National Park Service announced that the grounds of Liberty Island would reopen to visitors Monday after being closed since March 16. But there’s no reopening date yet for Lady Liberty herself, the statue museum or nearby Ellis Island.

The rest of the state is already in Phase 4, which typically permits opening malls and certain arts and entertainment centers. But Cuomo said this week that even in Phase 4, New York City can't have “any additional indoor activity” in places like malls and museums because of coronavirus transmission risks.

New York City also has been barred from opening up indoor dining, unlike the rest of the state.

Even so, “Phase 4 — what a striking reality, after everything we went through,” Mayor Bill de Blasio said Friday at an online briefing where he announced that the city would extend through October new provisions that have allowed restaurants to set up more outdoor tables than usual.

Meanwhile, Cuomo announced a crackdown Thursday on bars and restaurants across the state, saying too many have been flouting mask-wearing and social distancing rules, especially downstate.

Taverns and eateries can no longer allow walk-up bar service or serve alcohol to people who aren’t buying food, and any establishment cited three times with breaking the rules will be closed.

The crackdown is worrying city restaurateurs, who have embraced outdoor dining as a lifeline after months of being limited to takeout and delivery.

“Businesses need to be responsible for the activity on their property, but staff certainly can’t be deputized to police the streets,” said Andrew Rigie, the executive director of the NYC Hospitality Alliance, a restaurant and nightlife association.

Daily statewide statistics released Friday show New York with 776 newly confirmed cases, representing 1% of all tests. The number of people hospitalized with COVID-19 on Thursday dropped to 765 and 10 people died, according to state figures. More than 25,000 people have died statewide since the outbreak began.