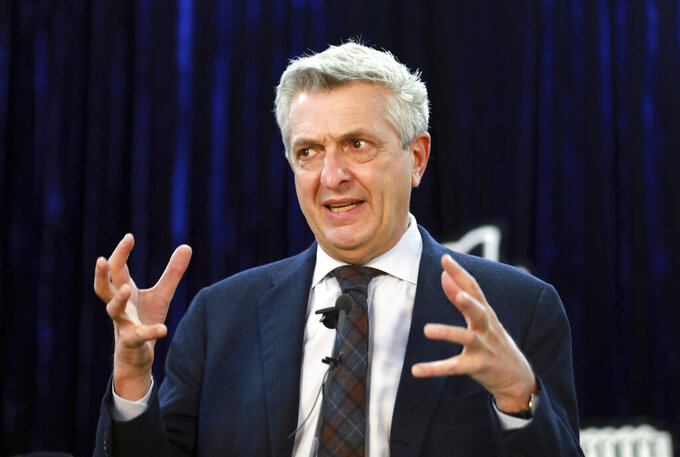 KABUL, Afghanistan (AP) — The U.N. ‘s top official for refugees said Tuesday that if the Afghan peace process collapses and violence continues, there will be a humanitarian disaster as thousands of displaced people struggle to survive the coronavirus pandemic and the harsh winter.

U.N. High Commissioner for Refugees Filippo Grandi told The Associated Press at the end of a four-day visit to Afghanistan that if the fighting continues, there will be more internal displacement.

“If this peace effort collapses then we could see a big humanitarian disaster in the country that is for sure, I hope it won't," he said.

Violence and chaos have increased in Afghanistan in recent months even as government negotiators and the Taliban are meeting in Qatar to find an end to decades of relentless war. The two sides have made little progress.

The International Rescue Committee warned earlier this year that Afghanistan is on the brink of disaster because the government is unable to test some 80% of possible coronavirus cases.

Afghanistan has so far officially recorded more than 43,000 confirmed cases of the virus, including 1,600 deaths, with the number of infections thought to far outnumber the official tally.

Grandi urged the international community to remain committed to Afghanistan and called for greater support for displaced and returning Afghans ahead of a donor pledging conference in Geneva next week.

He said his message in Geneva would be that countries should be prepared for two scenarios: a good one in which it's necessary to invest in development but also one in which, especially in the short term, more food, water and shelter aid will be needed for people displaced by the conflict.

Arzo, 27, who like many Afghans goes by only one name, is the mother of six children living in the Bagrami camp for displaced people on the outskirts of Kabul. She told The Associated Press recently that the family's only breadwinner is 8-year-old Fawad, who sells plastic bags in the local market. She said her husband lost his right leg, the victim of a suicide attack in Nangarhar province.

Arzo’s eldest daughter, 10-year-old Husna, collects burnable garbage for the mother to cook a meal or boil tea in the corner of the house.

“If someone sees our misery they will help us with some loaves of bread, but most of the time, we have to just spend the day with an empty stomach. We are going through a lot of hardship and problems, we want a lot of things, but we can’t afford to have them. My husband is disabled, who else will come to help us,” she said.

In addition to Afghans displaced within the country, more than 742,000 Afghans have returned from Iran and Pakistan since the beginning of this year, according to the International Organization for Migration. The majority of them are working and trying to provide for large families. But with the lack of job opportunities and insecurity, it is often not possible for the breadwinner of a large family to adequately support them financially.

Grandi appealed to all sides of the conflict to reduce the violence in Afghanistan.

The violence “doesn’t create the confidence in the peace process that they need, not only the refugees and displaced, but all the Afghan people," he said. “So, I am telling the Afghan people be patient, but I have to tell the others, hurry up and find the solution soon because it is much needed, 40 years is a long time for suffering."