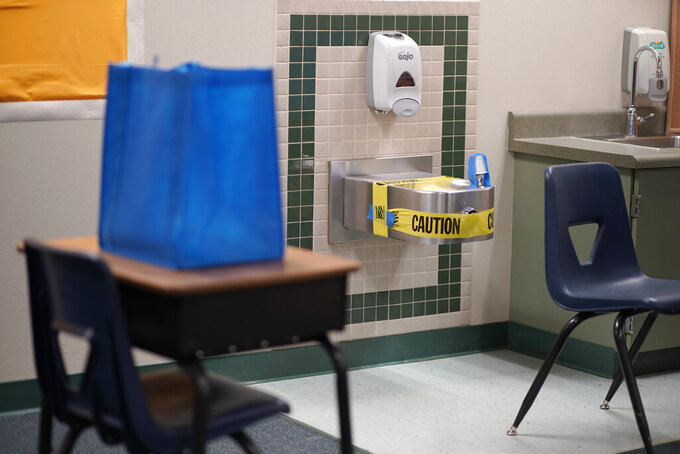 A water fountain is taped off in preparation for students to return at Dean Petersen Elementary School, Wednesday, Feb. 24, 2021, in Las Vegas. School administrators in Las Vegas say they plan a phased return to classrooms in coming weeks for middle- and high school students in the nation's fifth-largest school district. (AP Photo/John Locher)

LAS VEGAS (AP) — All Las Vegas-area middle and high school students can return to classrooms for hybrid in-person instruction in phases rolled out after the youngest pupils go back to campuses next week, school administrators said Wednesday.

Clark County School Superintendent Jesus Jara said sixth- and ninth-graders and high school seniors can return to class beginning March 22, and grades seven, eight, 10 and 11 can return April 6. They will have two-days-a-week classroom schedules. Pre-kindergarten through grade five will return at that time to five days a week.

Jara and school board President Linda Cavazos made the announcement — accompanied by school trustees and representatives of the district's employee unions — just days before the nation's fifth-largest school district begins hybrid schedules for pre-K to third-grade students.

Cavazos said officials were balancing the effects of the pandemic including “physical safety from COVID-19 and mental and emotional safety from the accompanying stress and anxiety.”

“We have suffered losses of life, academic setbacks for some, and worked our way through a complex web of adjustment and uncertainty,” she said, “that stretched from our littlest pre-K student to our 2020 and 2021 seniors.”

The hybrid model has half the class attend on Mondays and Tuesdays. Classrooms are sanitized on Wednesdays. The other half of the class attends Thursdays and Fridays. On days pupils are not in class, they are scheduled for online instruction.

All the district’s 18,000 teachers and 24,000 support employees and administrators are expected at work March 15, Jara said. That will be one year to the day after Nevada Gov. Steve Sisolak announced widespread closures statewide, including schools, to prevent people from gathering and spreading the coronavirus.

At the time, 21 people had been diagnosed statewide with COVID-19, including 16 in Clark County, which includes Las Vegas. The first death was announced March 16.

As of Wednesday, health officials have reported 4,919 deaths statewide, including 3,827 in the Las Vegas area. More than 292,000 people have been diagnosed with COVID-19 in Nevada, more than 9% of the state’s 3.1 million residents. The death toll nationally has topped 500,000.

District officials said parents can opt to have their children continue online or distance education, but Assistant Superintendent Brenda Larsen-Mitchell said they expect about 60% of the district’s 315,000 students to choose to return to class.

The Clark County district has more than 330 campuses in an area the size of New Jersey.

Students probably won’t be vaccinated against COVID-19, officials said, since the only two vaccines being administered nationwide are for adults — the Pfizer product for people 16 and older and the Moderna vaccine for people 18 and older.

The district’s 42,000 teachers and employees are not required to report whether they receive vaccines, so school and union officials said Wednesday they won't know how many have done so before returning to class.

Jara told reporters that more than 15,000 school district employees were vaccinated at a University of Nevada, Las Vegas clinic. Neither school nor Southern Nevada Health District officials said they knew how many school employees received shots through public health clinics or other outlets.

Sports will be allowed to resume with modified schedules, strict testing protocols and no spectators, the school superintendent said. Only football will be full-contact.

This story was first published on February 24, 2021. It was updated on February 25, 2021, to correct by saying pre-kindergarten through grade five will return to classrooms five days a week beginning April 6, not two days a week.