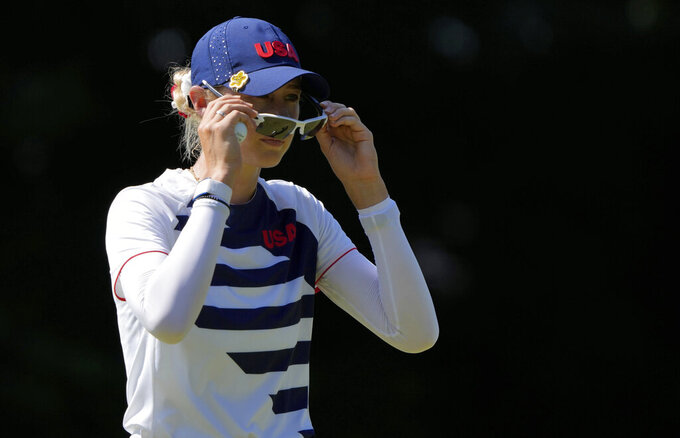 Nelly Korda, of the United States, sets her sunglasses on the 17th hole during the second round of the women's golf event at the 2020 Summer Olympics, Thursday, Aug. 5, 2021, at the Kasumigaseki Country Club in Kawagoe, Japan. (AP Photo/Andy Wong) 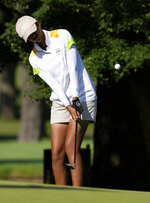 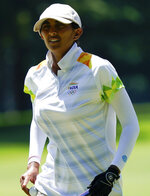 KAWAGOE, Japan (AP) — Nelly Korda reached her tee shot on the final hole of an otherwise flawless round, looked up and saw a thick pine branch blocking her path to the green. She flung her water bottle toward her golf bag and tried to figure out the next option.

Any thoughts of the second 59 in women's golf history ended there.

The pursuit of a gold medal?

Stronger than ever, even with a double bogey on the 18th hole that forced the 23-year-old American to settle for a 9-under 62 to tie the Olympic record in women's golf.

Already a major champion and the No. 1 player in women's golf, Korda looked dominant as ever in the second round to build a four-shot lead, moving a big step closer to Olympic gold.

“I've had a lot of good rounds this year. I've been playing really well,” Korda said. “I think I've had a couple of 9 unders, so it was definitely one of the best, yes. But golf humbles you. I got a nice little double on 18.”

She was at 13-under 129 and lost two shots for what still looks like a big lead. How much closer she is to winning is still to be determined.

Players already have been alerted to the possibility of a 54-hole tournament because of a forecast for a tropical storm on the weekend. Tee times have been moved forward Friday to beat the heat, and the plan is start even earlier Saturday if the weather allows.

So much is up in the air. But there's no doubting who's in control.

“I was hoping that I would catch on with her momentum and play well myself, but I wasn't able to,” said Nasa Hataoka, who played with Korda. “It felt like Nelly scooped away all the birdies from us today.”

She played the last five holes on the front nine at Kasumigaseki in 6-under par — that included a 3-wood to 25 feet for eagle on the reachable par-4 sixth — for a 30.

Korda made consecutive 6-foot birdie putts on the 16th and 17th holes, putting her at 11 under for the round. One more birdie would have allowed her to join Annika Sorenstam in 2001 as the only woman to shoot 59.

“I wasn’t thinking about it at all,” she said of a birdie for 59. “I was like, ‘Oh, cool, I have a pretty good lead going into 18.’ Unfortunate that double on 18, but that’s golf and that’s just how it goes sometimes.”

The tee shot was hammered and bounded through the fairway. She was partially stymied.

“I would have had to draw it around out of the rough. I just didn't think it was worth it, honestly,” Korda said. “I was more thinking, ‘OK, pitch it out and then try to get it close and try to save par.’ But I was a little too cute with that pitch shot.”

It found a bunker — the pin was front — blasted out to 8 feet and missed the putt.

That's about the only thing that didn't go Korda's way.

Her 62 still tied the Olympic women's record set by Maria Verchenova of Russia last time in the final round at Olympic Golf Course in Rio de Janeiro.

All she cared about was leading by four shots over the Danish duo of Nanna Koerstz Madsen and Emily Kristine Pederson, and Aditi Ashok of India, who is giving up plenty of distance and little else in her bid for a medal.

Madsen was 6 under through eight holes to set the early pace on another blistering day in which players often walked outside the ropes in the shade of trees. Her putter cooled on the back nine and she posted a 64.

Ashok, the 23-year-old who was often some 30 yards behind Madsen, finished with three birdie putts inside 10 feet over her last four holes for a 66. Ashok has only one bogey through the opening 36 holes.

Pederson had eight birdies and an eagle in her round of 63 to join the group at 9-under 133.

Korda was just hitting her stride when they finished. She holed a double-breaking 15-foot birdie putt on the fifth, drove the 245-yard sixth hole with a 3-wood, made a 25-foot eagle putt, birdied the next two and never really stopped.

It was a clinic of fairways and greens, birdie putts and no stress except for trying to keep from overheating. It left her in great position for a gold medal in her first Olympics, and she is preparing for two more rounds. Except that part hasn't been decided.

“I'm going to have the mindset that it's going to be a 72-hole golf course and whatever happens, happens,” Korda said. “But I'm not going to set my mind on that it's just going to be less than 72. Because right now it is.”