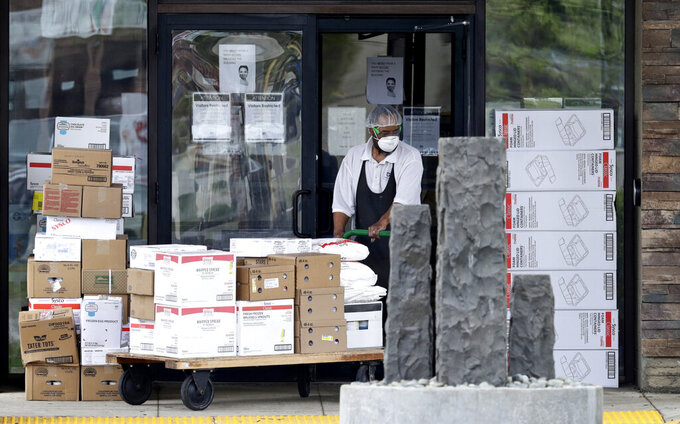 A worker pushes a cart of supplies into Greenbrier Health Center, Tuesday, May 19, 2020, in Parma Heights, Ohio. The number of deaths from the coronavirus in Ohio's nursing homes is now over 1,000. That means long-term centers account for three out of five deaths from the virus in the state. Greenbrier has at least 24 cumulative resident cases and 12 cumulative staff cases. (AP Photo/Tony Dejak) 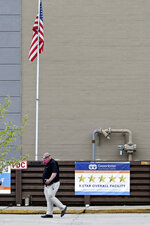 COLUMBUS, Ohio (AP) — Ohio National Guard units will be going to nursing homes this week to test for the coronavirus as the death toll continues to climb at a fast pace among long-term care residents, Gov. Mike DeWine said Tuesday.

The devastation from the virus inside the state's nursing homes is even more severe than what had been known, with new statistics showing the death toll has topped 1,000 residents.

That translates to three of every five virus-related deaths in the state since the pandemic began, according to updated statistics obtained by The Associated Press.

DeWine said he'll be asking both the guard and the state's largest hospitals to pitch in with testing.

“We’re going to push the testing as hard as we can in these nursing homes,” he said. “And I think in the next seven days we’re going to be able to report to you a lot more progress in that area.”

Fourteen teams of 10 members each will assist the Health Department with testing, with teams consisting of medically qualified Ohio Air and Army guard personnel including medics and nurses, said Guard spokeswoman Stephanie Beougher.

DeWine's announcement came as cases are growing at the Ohio Veterans Home in Sandusky, including the death of one resident.

Long-term care centers are still seeing a steady number of deaths despite virtual lockdowns that have restricted all visitors and Ohio’s practice of deploying “strike teams” when there are outbreaks.

For more than a month, nursing homes operators have been asking for more personal protective equipment and calling for widespread testing, saying they should be a priority like hospitals because of their residents’ susceptibility to COVID-19. But the state said at that time there simply weren’t enough tests, maintaining a policy of only testing once a nursing home resident or staff member shows symptoms.

In western Ohio, nearly two months passed between the first positive case at a nursing home in Troy and the completion of testing for all the facility’s residents and staff. During that time, 24 residents died at a pair of long-term care centers eight miles apart — a sign of what was to come for the rest of Ohio.

“We were absolutely amazed at how quickly it spread through the facility even with proper protocols in place,” said Dennis Propes, the health commissioner in Miami County.

At the height of the outbreak, the local health department was pushing to check everyone at the two Miami County nursing homes, but they were told to follow the state’s policy of treating all of the residents as if they had the virus because of the shortage of tests.

Being able to evaluate everyone at all nursing homes — not just those that are infected — would be a big step to stop more flare-ups and allow health departments “to see what’s really there,” Propes said.

Miami County officials are fairly confident that the outbreak has stabilized in those two nursing homes, but that’s not the case around much of Ohio, which has an older population on average than most states. In Lucas County and Toledo, the number of nursing home deaths during the past month has climbed to nearly 100.

As of last week, 1,031 residents of Ohio’s long-term care facilities had died from the virus, the state health department told the AP.

Up until now, that total included deaths only after April 15, which was when the state began tracking long-term care deaths by facility.

The new total includes 369 residents who died before mid-April, when Ohio recorded only whether an individual had been in a nursing home, according to the health department.

Nationally, outbreaks in nursing homes and long-term care facilities have claimed more then 32,000 lives, according to a count by the AP.

More testing is crucial for nursing homes, but it must be done in a thoughtful and efficient way, said Kathryn Brod, CEO of LeadingAge Ohio, which represents long-term care and hospice organizations.

For example, testing staff is challenging since many employees work multiple shifts over multiple days, she said. And despite improvements, some facilities are still short of personal protective equipment. Another challenge is coordinating approaches by the state’s 113 local health departments, and the range of differences between nursing homes, assisted living facilities and other care centers.

“We have so many different kinds of congregate care settings across the state, that I think one of the challenges that we have is that everybody wants to have a one-size-fits-all approach, and we just can’t,” Brod said.

Ron Kilpatrick has pushed more testing at the Youngstown-area nursing home where his 100-year-old mother moved six months ago. He has no complaints about the care she’s been receiving at the home, where she’s isolated from others and has everything she needs brought to her room.

What has bothered him is that her facility, under state protocol, would not conduct testing unless symptoms are detected among staff or residents.

At the very least, nursing home staff should be tested regularly since they’re the ones most likely to inadvertently bring the coronavirus into a facility, Kilpatrick said.

“It’s just logical to me you’d want to get ahead of this and just test the staff,” said Kilpatrick, 78, of Naples, Florida. “You don’t have to test the residents right away. They’re not going anywhere. They’re not bringing it in.”

Last week, the White House strongly recommended to governors that all residents and staff at long-term care facilities be tested for the coronavirus in the next two weeks. DeWine said then that it was unlikely in Ohio, arguing the state had a responsible plan without widespread testing.