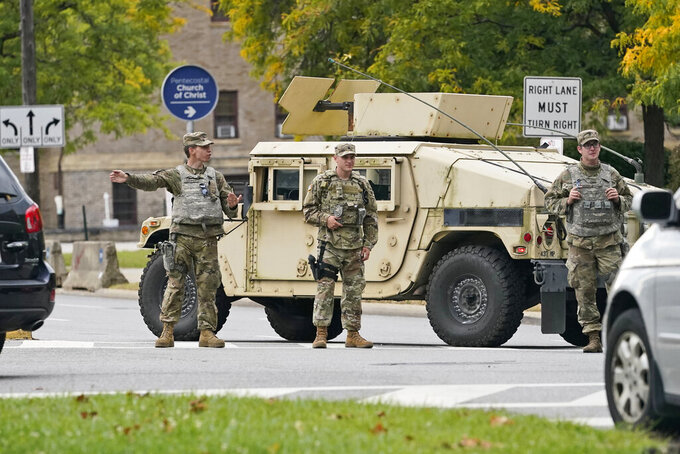 FILE – In this Tuesday, Sept. 29, 2020 file photo, the Ohio National Guard directs traffic away from the debate hall in Cleveland where the first presidential debate between Republican candidate President Donald Trump and Democratic candidate and former Vice President Joe Biden was being held. Ohio Gov. Mike DeWine announced on Tuesday, Jan. 12, 2021 that he has activated 580 National Guard men and women in preparations for potentially armed protests at the U.S. Capitol and the Ohio Statehouse in Columbus, Ohio. (AP Photo/Tony Dejak, File)

“The sad truth is that there are people in our country who want to turn peaceful protests into an opportunity for violence,” said DeWine, a Republican, at a news briefing. “These are violent people, and their violence will not be tolerated in Ohio.”

The governor was joined by Columbus Mayor Andrew Ginther, a Democrat, and leaders of the state's highway patrol and National Guard forces to announce further restrictions after a violent mob loyal to Trump stormed the U.S. Capitol last week, forcing congressional members to take cover and resulting in the death of five people, including a Capitol Police officer.

DeWine had authorized National Guard members from Jan. 14 to Jan. 21 to conduct training and be prepared in case called upon to police armed protests authorities say are planned at the U.S. Capitol and the Ohio Statehouse leading up to the Inauguration of President-Elect Joe Biden.

More than 700 National Guard members in Ohio will be sent to Washington. Inauguration Day is Wednesday, Jan. 20.

DeWine and state and local officials took it a step further Thursday, calling for the closure of the Ohio Statehouse and all state buildings in downtown Columbus from Sunday to Thursday next week.

But the governor and other state and local officials did not disclose any details about the anticipated size of the protests or how they have determined there will be any.

Many online platforms the groups used to share information have been banned in recent days, and it's unclear what might happen in coming days.

Regardless, Adj. Gen. John Harris, the head of the Ohio Guard, said the force is prepared to handle whatever comes its way.

“We’re the fifth-largest National Guard in the country, so we have a significant set of capabilities available to us and to the governor," Harris said during the briefing.

The Statehouse has seen several protests in the past year related to the coronavirus pandemic and concerns over racism and police brutality.

In mid-April, protesters angered by the governor’s coronavirus shutdown orders converged on the Statehouse, pounding on windows and leading the governor to shift a media center for pandemic questions to a windowless area on the first floor.

In late May, people protesting the death of George Floyd smashed 28 Statehouse windows; damaged doors, light poles and flags; and dumped several garbage cans. One person briefly entered an office through a broken window but retreated before troopers within the building could catch him.

In June, the Statehouse was defaced with red handprints and the phrase “hands up, don’t shoot” in protest of police brutality.

No change in Statehouse weapons policy will be made, unlike in Michigan, which banned the open carrying of weapons in its capitol. Ohio already bans weapons in the Statehouse except for law enforcement officers with proper permission.