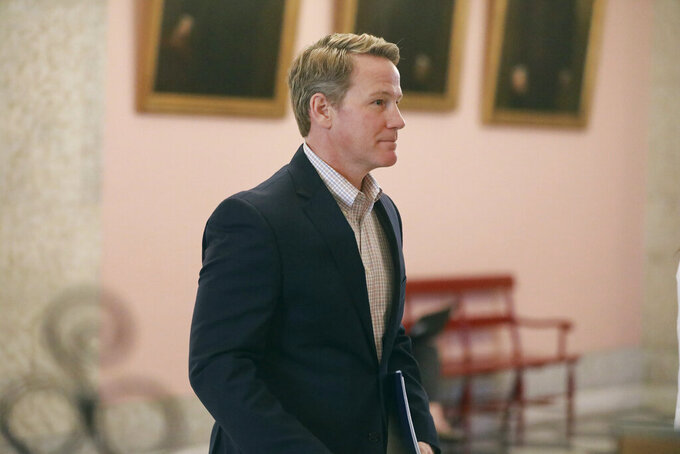 Ohio Lt. Gov. Jon Husted walks out of a news conference on Monday, March 23 2020 at the Ohio Statehouse in Columbus, Ohio. Ohio's lieutenant governor promised a group of Asian American neighbors during a weekend meeting that he would use his public platform to speak out against unwarranted violence facing their community, but he failed to apologize for the divisive tweet that prompted their concern. (Doral Chenoweth/The Columbus Dispatch via AP)

COLUMBUS, Ohio (AP) — Ohio's lieutenant governor promised a group of Asian American neighbors during a weekend meeting that he would use his public platform to speak out against unwarranted violence facing their community, though he failed to apologize for the divisive tweet that prompted their concern.

Republican Lt. Gov. Jon Husted confirmed during an unrelated news conference Tuesday that the private, two-hour meeting took place this past weekend at his suburban Columbus home, which he and his wife, Tina, thought "would be the best way to show our genuine desire for dialogue.”

Bishop Lord, an informal spokesperson for the Asian American families, called the meeting productive, but noted that it did not end in an apology from Husted. The lieutenant governor's March 26 tweet in which he used the term “Wuhan virus" has been criticized as racist.

“It’s very difficult to sit around and talk about a subject that is as complex as race,” said Lord, who attended the meeting. “It’s especially complex when you’re dealing with feelings and cultures that you may not necessarily have a lot of exposure to.”

Lord said about half a dozen of the 80 Asian and Asian American neighbors who had signed a letter of concern to Husted attended the meeting. He called the gathering a hopeful sign that future dialogue about race could take place in their tight-knit Upper Arlington neighborhood.

Husted echoed that sentiment, calling attendees of the closely watched meeting “our new friends.” He described the conversation as “enjoyable” and said he believed it built understanding and trust.

While Husted said he reiterated that he did not intend the tweet as racist but as an attack on the Chinese government, he said, "As they listened to me, I also heard them.”

In his tweet, Husted shared a former Centers for Disease Control and Prevention director's assertion, without evidence, that the virus that causes COVID-19 originated in a lab in Wuhan.

“So it appears it was the Wuhan Virus after all?” tweeted Husted, who has been at the forefront of Ohio's aggressive response to the virus.

Lord said the meeting was emotional for both parties but never reached a point of hostility.

“This was just some neighbors sitting around and talking to one another about how we solve the bigger problems,” he said.

The meeting came weeks after the letter in which neighbors told Husted that his “choice of words has only raised the anxiety and fear that Asians and Asian Americans in Upper Arlington are currently experiencing.”

They described bullying and abuse in the school district they share with the Husteds that began ”well before the start of the COVID-19 pandemic" but "increased significantly in the last 14 months and has reached levels that have brought news media attention to our doorsteps.”

Husted said Tuesday that he agreed at the group’s request to raise their concerns over misdirected violence toward Asian Americans and “to emphasize that anybody who may have frustrations with what a foreign government may do, in this case the Chinese Communist Party, that it can never be manifest in violence or hate toward people who originated from those countries."

“It has nothing to do with them,” he added. "As a matter of fact, that’s a reason for us to show additional kindness, care and concern for people who may feel that intimidation or fear.”