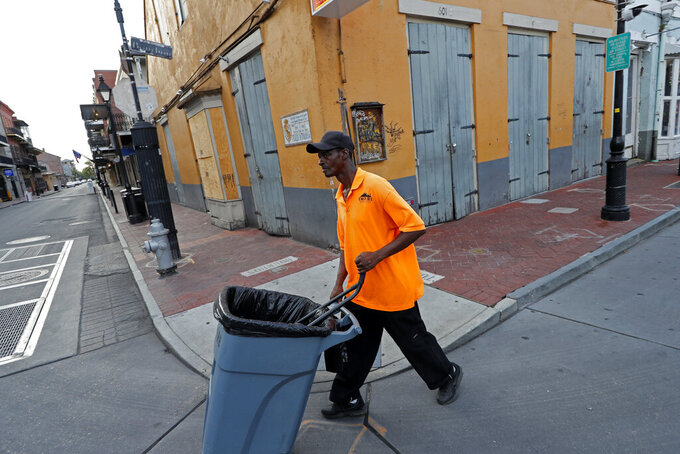 A worker pushed s trash can on a largely empty Bourbon Street, due to the coronavirus pandemic, in the French Quarter of New Orleans, Tuesday, May 12, 2020. Attempts to curb the spread of COVID-19 have visited a kind of triple economic whammy on the state. (AP Photo/Gerald Herbert)

With a shrimp in a hard hat clinging to an oil derrick as its logo, the festival may the best example of how diverse economic interests mesh in south Louisiana — and how attempts to curb the spread of COVID-19 have visited a kind of triple economic whammy on the state.

A worldwide oil glut was pushing down prices even before the pandemic fight lowered energy demand, contributing to layoffs. Festival-driven tourism has dried up, meaning more lost jobs. And one major tourist draw — cuisine built around fin fish, shrimp, oyster and crabs — also is suffering.

“May is normally our busiest month, and it’s terrible,” said Harlon Pearce, owner of a seafood processing business in suburban New Orleans, where restaurants are limited to take-out service and major spring and summer festivals have been canceled. “You have Jazz Fest, you have French Quarter Fest, Mother’s Day. It’s a tough time. Us not having any of our major events this year for tourism is going to be a killer."

The board that runs the Shrimp and Petroleum Festival in Morgan City, roughly 80 miles (130 kilometers) west of New Orleans, hasn't made a final decision on whether to hold a 2020 festival. Even if the show goes on, local seafood dealer Daniel Edgar said, “There’s not going to be a whole lot to celebrate.”

South of New Orleans, in the barrier island community of Grand Isle, marina and hotel owner Buggie Vegas said he recently reopened his hotel after being closed for weeks as access to the island was restricted and a curfew was imposed. He estimates about half of his 26 rooms were booked on a recent weekend, instead of the normal full house in good weather.

Visitors spent $15 billion in Louisiana in 2018 according to the state Department of Culture, Recreation and Tourism, and the hospitality and leisure economy accounted for more than 240,000 jobs as of February. In March, however, hospitality and leisure jobs dropped by 8,400, according to the Louisiana Workforce Commission, the state's labor department.

Recreational fishing is picking up on the coast, but Vegas has noticed a drop in charter fishing that he attributes, at least in part, to oil-related layoffs.

“The oil companies laid off a bunch of people for the oil price. And that’s a lot of their entertainment,” Vegas said.

Shrimper Acy Cooper said coastal communities rely on the oil workers and the shrimpers. “If we don’t make any money, they don’t,” he said.

The state seafood promotion board estimates the industry's economic impact at $2.4 billion. Now, shrimp boats remain docked at Morgan City on the Atchafalaya River in St. Mary Parish, seafood dealer Edgar said. His family-run business is still operating, finding markets for crawfish and crabs, but many wholesalers he deals with have shut down and business is unpredictable, he said.

Cooper, president of the Louisiana Shrimpers Association, estimates only about 5% of shrimp boats are going out.

“Just about everything’s shut down right now, with the price of oil,” said Mark Cognovech, a member of the governing council in Plaquemines Parish, at the state’s southeastern tip.

The Louisiana Workforce Commission reports that direct employment in oil and gas is about 34,000. The estimated payroll is more than $3 billion, according to the Louisiana Oil and Gas Association. But large employers have informed the state labor department of hundreds of oil- and gas-related layoffs because of COVID-19 uncertainty. The association's director, Gifford Briggs, said the number of lost jobs tied directly to oil and gas employment could surpass 23,000 in the coming months, based on a survey of members.

Looking ahead, Edgar doesn't foresee a quick turnaround, even as restrictions are eased. Restaurants still can't fill to capacity under social distancing guidelines. And some would-be patrons, mindful of the disease, won't show up, Edgar said.

“A lot of people aren't going to want to get in big crowds,” Edgar said. “Even if you open the restaurants tomorrow.”

And the pain could linger. In New Orleans, Mayor LaToya Cantrell has acknowledged that Carnival season parades and public celebrations leading up to Mardi Gras — Feb. 16 next year — may have to be canceled.

As for the Shrimp and Petroleum Festival?

“We go back and forth, back and forth,” said the festival's board chairman, pawn shop owner Charlie Solar Jr. He described the current status as “on hold” but acknowledged that it's an uncertain term.