Old-man Ehlinger and freshman Rattler face off in Texas-OU 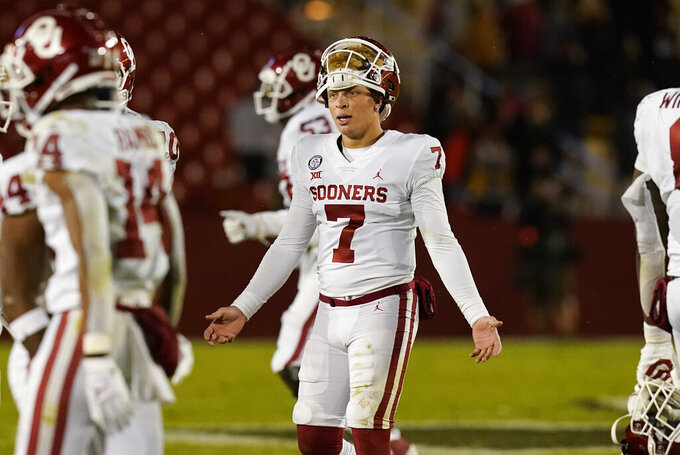 AUSTIN, Texas (AP) — Texas quarterback Sam Ehlinger is the old man of the Red River rivalry. He has seen just about everything.

Ehlinger has watched Oklahoma Heisman Trophy winners come and go, losing to one, beating the other. He has led Texas to a win on a field goal in the final seconds. He has been battered around when the Sooners sacked him nine times a year ago.

The Longhorns senior has a deep well of experience to draw from when No. 22 Texas (2-1, 1-1 Big 12) and Oklahoma (1-2, 0-2) meet again Saturday in a Big 12 border rivalry that has made some quarterbacks and broken others.

On the other sideline will be talented freshman Spencer Rattler, the plug-in successor in Oklahoma's unending assembly line of Heisman-caliber quarterbacks. His early play has drawn raves in spots even though Oklahoma has now lost consecutive regular-season games for the first time since 1999.

Ehlinger, an Austin native, grew up with the rivalry but only once has he been able to wear the golden cowboy hat trophy given to the winner. That was in 2018 after his only victory over the Sooners.

Ehlinger won't get lost in the nostalgia as he makes what could be his last early-October walk into the Cotton Bowl stadium.

“The biggest thing is winning,” Ehlinger said. “Being attentive to detail and discipline is my biggest duty this week and I'll try to eliminate emotion from that.”

Ehlinger is one of the hottest quarterbacks in the country. His 14 touchdowns passes lead the nation. He rescued Texas with a stunning fourth-quarter comeback at Texas Tech and had the Longhorns in position to win again last week until a late goal-line fumble doomed the Longhorns against TCU. He also ranks second in program history in career passing yards and touchdowns.

“Any time you have Sam Ehlinger at quarterback you’re going to feel confident that as long as there's a couple of ticks left on the clock, he's going to find a way to get it done,” Texas coach Tom Herman said.

Ehlinger is also just the fifth Texas quarterback to start this rivalry four times (Ehlinger already has four starts against Oklahoma when counting the 2018 Big 12 championship game). That puts him in company with college and pro football Hall of Famer Bobby Layne (1944-47), Peter Gardere (1989-92), James Brown (1994-97) and Colt McCoy (2006-09).

Of that group, only Ehlinger has a losing record against the Sooners. Layne and Gardere both went 4-0. Oklahoma has never had a quarterback start against the Longhorns four times.

“To be able to jog out there one more time with him is going to be pretty special,” Herman said. “It's something I’ll make sure that I soak in.'”

Yet this Texas-Oklahoma game won't be like any of the previous ones. The coronavirus pandemic will see to that.

In a typical year, the pulsing energy of the crowd and wild momentum swings on the field can lift a freshman quarterback like Rattler or crush him. But the circus atmosphere around the game is gone, at least for this year.

The annual State Fair of Texas outside the Cotton Bowl has been canceled for the first time since World War II. That means no bus ride to the stadium through a massive crowd of jeers and cheers.

Once inside, the usual crowd of more than 90,000 fans split between Texas burnt orange and Oklahoma crimson at midfield will be reduced to just under 25,000. Social distancing rules will keep the two sides well apart.

Rattler was the consensus No. 1 quarterback in the 2019 recruiting class. His physical talent isn’t in question; whether he's mature enough to handle the brightest spotlight of his young career is. Oklahoma didn't make Rattler available to the media this week.

The Sooners badly need a win. Their streak of five consecutive league Big 12 championships is on the verge of collapse after the 0-2 start in league play.

Rattler, who grew up 1,000 miles away from the rivalry in Phoenix, is ready for the moment, Oklahoma coach Lincoln Riley said.

“As far as his emotional state, psyche, confidence, all that -- he’s rock solid. He is. He’s a competitor. He knows he belongs in that arena,” Riley said.

Statistically, Rattler already stands among the nation's best quarterbacks. He ranks seventh nationally in passer efficiency and is tied for second with 10 touchdown passes. Against Iowa State, he appeared more comfortable using his mobility, even rushing for a 5-yard touchdown in the first quarter.

Rattler will keep growing into the position, Riley said.

“One of the great examples, looking at the other sideline in this game. I think this will be the fourth different quarterback I’ve rolled out there with Sam on the other side,” Riley said.

Senior against freshman. Ehlinger was asked what would he tell the freshman version of himself?

“Good luck, because you are probably going to go against, in a four-year period, one of the best stretches of quarterback play at a single university,” Ehlinger said. “I would tell him to enjoy it, every single moment of it.”