Olympic semis lack US and Canada for 1st time since 2006 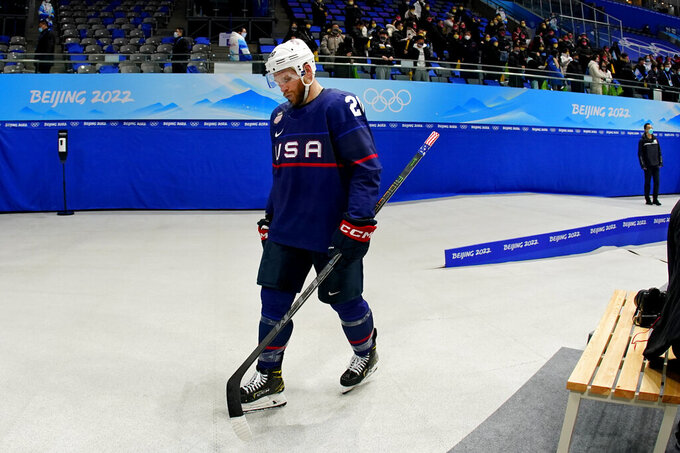 United States' Steven Kampfer leaves the rink after the United States lost to Slovakia in a men's quarterfinal hockey game at the 2022 Winter Olympics, Wednesday, Feb. 16, 2022, in Beijing. Slovakia won 3-2 in a shoot-out. (AP Photo/Matt Slocum)

BEIJING (AP) — Just because NHL players weren't at the Olympics doesn't mean the United States or Canada had lower expectations.

After rolling through the preliminary round undefeated, the young Americans looked capable of winning the country’s first Olympic gold medal in men’s hockey since 1980. Even though the Canadians were not nearly as convincing, simply being Canada was enough to think they could go all the way.

"Part of wearing this jersey is winning," Canada goaltender Matt Tompkins said after a 2-0 loss to Sweden in the quarterfinals. “Came here to win a gold medal and anything less than that (is) not what we were hoping for.”

Certainly North American TV executives weren't hoping for this either: the first men's hockey semifinals at the Olympics without the U.S. or Canada since 2006. It's a massive disappointment for each team, especially because the tournament took place on the smaller, NHL-sized ice that's more tailored to a North American style.

Canada was looking to improve on the bronze it won in Pyeongchang four years ago, when NHL players did not participate for the first time since 1998. The U.S. was so dominant early in Beijing that the unexpected end in a quarterfinal loss to Slovakia in a shootout stung harder.

"It’s a tough pill to swallow, it really is, just losing in any fashion," U.S. coach David Quinn said. “We just felt so good about the direction of our team and the way we were playing.”

They're now done playing, leaving three of the same semifinalists from 16 years ago in Sweden, Finland and the Russians. Slovakia is the newcomer, coached by Canada-born Craig Ramsay and set to play for the chance at the first Olympic hockey medal since the breakup of Czechoslovakia.

“We are happy with the quality — really good games,” International Ice Hockey Federation council vice president Petr Briza said Thursday. “We had some surprises. I think any hockey tournament needs some good surprises, so congratulations to Slovakia (on making) the semifinals.”

Ramsay's team is on the verge of its own “Miracle On Ice” — zázrak na ľade in Slovak — thanks to the 70-year-old hockey lifer running the show behind the bench and 17-year-old star Juraj Slafkovsky leading the tournament in goals with five.

Slafkovsky was 6 the last time Slovakia reached the semifinals, back in 2010. He tried to watch, but he had to go to kindergarten.

Ramsay had already played 14 NHL seasons, spent almost two decades as an assistant and won the Stanley Cup with the Tampa Bay Lightning. Of course Slafkovsky, whom Ramsay has entrusted with ice time in all situations despite being the youngest player in the tournament, scored in the upset of the U.S to help Slovakia advance.

“It feels amazing,” Slafkovsky said. "It happened last time 12 years ago and now again. I can’t wait to play in the semifinals.”

Slovakia faces second-seeded Finland, which is unbeaten in four games and has outscored opponents 18-7. The team is starting to play hallmark Finnish defensive hockey.

“We are confident, and we try to improve all the time,” said alternate captain Marko Attila, who has two goals in three games since spending six days in isolation in Beijing. “I think if you want to win something here in this kind of tournament, you have to have good defense.”

Defense by Sweden, which faces the Russians in the other semifinal, is a big reason Canada is out of the Olympics. Different from the U.S., which led Slovakia for half of regulation before giving up a bad bounce in the final minute and was knocked out in a five-round shootout, Canada was shut out by the Swedes and struggled to find its game.

“Too many shifts where we were trying to just survive,” defenseman Maxim Noreau said. “Wasn’t consistent enough.”

That inconsistency was enough to create the kind of early exit Canada is not used to at the Olympics. As forward Eric O'Dell said, Canada is “expected to win all the time.”

“We came here to win the gold medal,” Tomkins said. “Anything short of a gold medal is disappointing for us.”