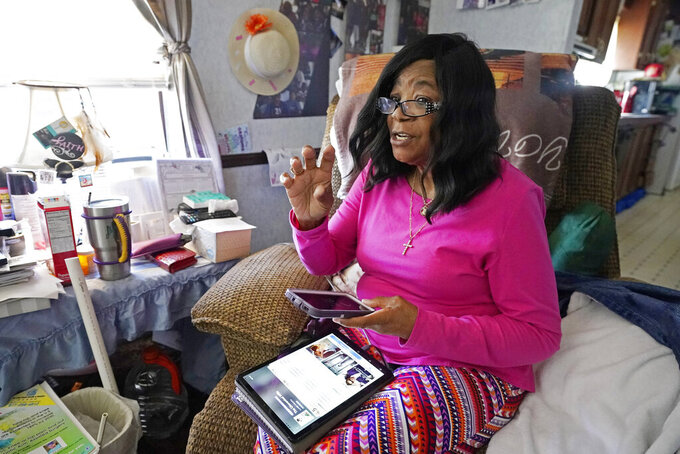 Mary Christian, 71, of McComb, Miss., recalls Friday, Jan. 15, 2021, the hours she spent on both her cell phone and iPad trying to arrange an appointment online for a COVID-19 vaccination through the Mississippi State Department of Health web site and on their listed registration phone line. Eventually, with help from one of her sons, she was able to enter the registration site only to find vaccination locations with openings were at least an hour's drive from the county she lives in and upon trying to sign up was informed they had no more openings. (AP Photo/Rogelio V. Solis)

DENVER (AP) — Howard Jones, who's 83, was on the phone for three to four hours every day trying to sign up for a coronavirus vaccine.

Jones, who lives alone in Colorado Springs, doesn’t have the internet, and that's made it much more difficult for him to make an appointment. It took him about a week. He said the confusion has added to his anxiety about catching what could be a life-threatening disease at his age.

As states across the U.S. roll out the COVID-19 vaccine to people 65 and older, senior citizens are scrambling to figure out how to sign up to get their shots. Many states and counties ask people to make appointments online, but glitchy websites, overwhelmed phone lines and a patchwork of fast-changing rules are bedeviling older people who are often less tech-savvy, may live far from vaccination sites and are more likely to not have internet access at all, especially people of color and those who are poor.

Nearly 9.5 million seniors, or 16.5% of U.S. adults 65 and older, lack internet access, according to U.S. Census Bureau data. Access is worse for seniors of color: more than 25% of Black people, about 21% of Hispanic people and over 28% of Native Americans 65 and older have no way to get online. That's compared with 15.5% of white seniors.

In the San Francisco Bay Area, Dr. Rebecca Parish has been dismayed by the bureaucratic process and continued calls for help from seniors. One of her patients, who’s 83, called her in tears, unable to navigate the online appointment system at Rite Aid. A 92-year-old woman called her before dawn this week after reading about her in a newspaper, telling her, “I’ll do anything to get this vaccine.”

So Parish took things into her own hands. She reached out to Contra Costa County and acquired 500 doses to vaccinate people this weekend at a middle school in Lafayette, California. She's working with nonprofits to identify seniors who don’t live in nursing homes and risk falling through the cracks. All her appointments have been claimed, but she’ll start taking them again once more doses are available.

Some health officials have been trying to find other solutions to ease the confusion and help senior citizens sign up, just as the Trump administration urged states this week to make the nation’s 57.6 million seniors eligible for the COVID-19 vaccine.

Some places have found simple ideas work. In Morgantown, West Virginia, county health officials used a large road construction sign to list the phone number for seniors to call for an appointment. Others are considering partnering with community groups or setting up mobile clinics for harder-to-reach populations.

Some seniors may be waiting to hear from their doctor. But there are limits to using health care systems, pharmacies or primary care providers to reach underserved people who don't have the internet, said Claire Hannan, executive director of the Association of Immunization Managers.

She said the two coronavirus vaccines available in the U.S. and their low-temperature requirements "don’t lend themselves to being sent out to rural areas.”

In McComb, Mississippi, where 77.5% of residents are Black and almost half the population lives below the poverty line, 71-year-old Mary Christian made an appointment online with her son's help. But the only available sites are at least an hour away from she lives.

“I’m 71 years old, and my kids are not going to be happy for me driving 1 to 200 miles away to get a vaccine,” said Christian, who has diabetes.

Some medical systems, like UCHealth in Colorado, are trying to partner with community groups to get vaccines to underserved populations, like seniors.

Dr. Jean Kutner, chief medical officer of UCHealth University at Colorado Hospital, said she’s volunteering at a clinic hosted by a church that brings in the vaccine and helps build trust between health care workers and residents.

For now, UCHealth schedules appointments online, but Kutner said a COVID-19 hotline is in the works because of the volume of calls from seniors.

“Seniors are comfortable with the phone side of things, so that that’s not really a technological barrier for them,” said Gretchen Garofoli, an associate professor at West Virginia University’s School of Pharmacy.

When calling for an appointment is an option, finding a number is often only possible online.

That was the problem for Jones, the 83-year-old in Colorado. A retired service member, he considered reaching out to Veterans Affairs but couldn’t find a phone number.

He asked for help from a friend, who gave him several numbers. One led to Angela Cortez, head of communications for AARP in Colorado.

AARP has been flooded with calls from seniors like Jones who don't have the internet and need help navigating the websites of health departments, care providers and vaccine sign-up forms, Cortez said.

“It’s not like you can show up somewhere and get vaccinated," Cortez said. "And if you don’t have access to a computer, you’re at a disadvantage.”

Even Cortez had trouble as she tried to help Jones. She called numbers listed on the Colorado health department website and several Safeway stores after Jones heard friends were vaccinated there.

“I’m an employee of AARP, one; and two, I’m the communications director — I’m a trained journalist — and I have a computer, three, and I can’t even get through to anybody,” she said.

A friend was finally able to get Jones an appointment for Saturday. But he's frustrated that he had “to go through side channels” instead of doing it himself.

Naishadham reported from Phoenix. Associated Press reporter Janie Har in San Francisco and data journalist Larry Fenn in New York contributed to this report. Nieberg is a corps member for the Associated Press/Report for America Statehouse News Initiative. Report for America is a nonprofit national service program that places journalists in local newsrooms to report on undercovered issues.

This story has been corrected to show that there are 57.6 million seniors in the U.S., not 54 million, according to Census Bureau data.