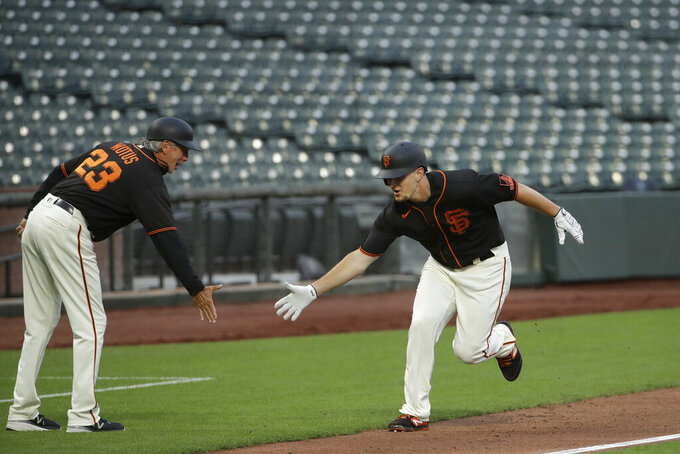 A baseball season that was on the brink before it ever began because of the virus outbreak is set to start Thursday night when excitable Max Scherzer and the World Series champion Washington Nationals host prized ace Gerrit Cole and the New York Yankees.

When it does get underway — the DC forecast calls for thunderstorms, the latest rocky inning in this what-can-go-wrong game — it’ll mark the most bizarre year in the history of Major League Baseball.

And a rack of strange rules. DHs in the National League, well, OK. An automatic runner on second to start the 10th inning? C’mon, now.

Plus, a poignant reminder of the world we live in. A Black Lives Matter stencil can be put on mounds throughout the majors during the opening weekend.

And still there's a team that doesn't know where it’s going to play — barred from Toronto because of health concerns, Vladimir Guerrero Jr. and the Blue Jays had hoped to roost in Pittsburgh or Baltimore or Buffalo or somewhere else.

To many fans, that will do. No other choice, really. Four months after the games were supposed to start, strange ball is better than no ball, right?

Opening day brings a tasty doubleheader: a marquee pitching matchup in Washington, followed by the nightcap at Dodger Stadium when star outfielder Mookie Betts, fresh off a $365 million, 12-year contract, and his new Los Angeles teammates take on the San Francisco Giants.

One player Dodgers ace Clayton Kershaw won’t face: six-time All-Star, three-time champion and former MVP Buster Posey. The Giants catcher and his wife have adopted twin identical girls who were prematurely born, and he’s among about a dozen players who have chosen to sit out this year.

“From a baseball standpoint, it was a tough decision for me,” Posey said. “From a family standpoint, making a decision to protect children, our children, it was relatively easy.”

Other players won't be ready by the weekend — on Wednesday, the Royals announced Hunter Dozier (26 home runs, 10 triples) had tested positive for the virus and was being put on the injured list.

For those are who healthy, it’s time to play. For how long, with the virus looming, we’ll find out soon enough.

Something that will be firmed up by the first pitch: how many teams will make the playoffs. A decision is due by then after renewed talks about expanding the postseason field.

Tossing out the first ball at Nationals Park to begin a schedule clobbered by COVID-19 will be Dr. Anthony Fauci, the country’s top infectious disease expert.

Don’t worry, Doc. Even before the first pitch, this season already has handled plenty of bad hops.

Elsewhere around the bases this year:

MLB players traditionally haven’t been as outspoken as those in the NFL and NBA on social issues. Until this year, former Oakland catcher Bruce Maxwell was the only baseball player to take a knee before the national anthem — he did that in 2017 and felt it cost him a future spot in the majors.

New Giants manager Gabe Kapler and several of his players knelt during the national anthem before an exhibition game this week. A group of Reds did the same in support of the Black Lives Matter movement.

Said Yankees star Aaron Judge: “That’s the beauty of America, is freedom of speech and freedom to express yourself."

MLB players can put a patch with “Black Lives Matter” or “United For Change” on a jersey sleeve during opening day.

Didi Gregorius and Clint Frazier homered in exhibition games while wearing masks —those aren’t mandated on the field, but many other rules and guidelines are in place.

Social distancing in the dugout. Skip tossing the ball around the infield after strikeouts. Keep the Phillie Phanatic and mascots off the field.

No high-fives, either. Not a problem, Phillies slugger Bryce Harper said.

Still, a lot of protocols to keep in mind for players who’ve been doing things the same way since they were kids.

“Is it going to be perfect the very first day?” A’s manager Bob Melvin said. “Probably not.”

All those hoots and hisses the Houston Astros heard in March, they’re gone now. Some fans will claim the guys who took part in that sign-stealing scam are getting off easy, not feeling the wrath of crowds on the road.

MLB has issued stern warnings against any basebrawling this year. Even so, some Houston hitters might feel a little retribution — José Altuve, Alex Bregman and George Springer all got hit by pitches Tuesday night in Kansas City during the Astros' final tuneup.