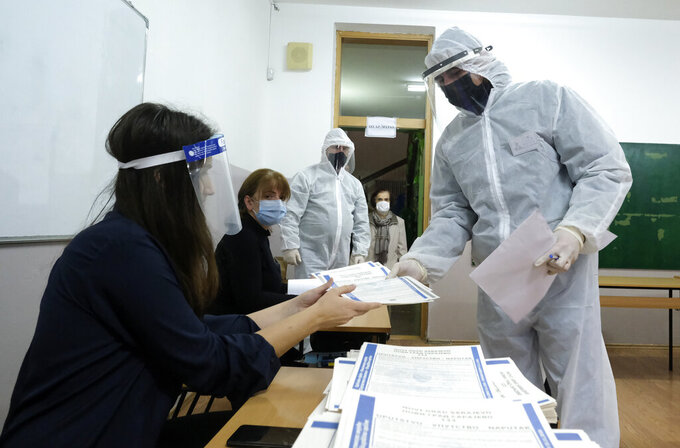 Members of a mobile electoral commission prepare go to voters during local elections in the capital Sarajevo, Bosnia, Sunday, Nov. 15, 2020. Polls have opened at Bosnian local elections, where over 3 million voters will have the right to choose their local mayors and city hall parliaments members. Despite the huge number in positive cases and deaths from COVID-19 in Bosnia, thousands of people have flocked the polling stations early Sunday, wishing to choose their local leaders for next four years. (AP Photo/Kemal Softic)

Riding a wave of dissatisfaction with how nationalist and right-wing parties are handling the pandemic, moderates took power in the capital, Sarajevo, and the biggest Serb-run town, Banja Luka, as well as in other bigger cities across the country, according to preliminary results released Monday.

Although the Sunday elections were local, it's widely believed they could pave the way for new overall leadership of the small Balkan nation, which has been uneasily split between its three main ethnic groups — Serbs, Croats and Bosnian Muslims — since the end of its devastating 1992-95 war.

Turnout for the vote, held in both of the country’s semi-autonomous regions — the Serb-run Republika Srpska and the Bosnian Muslim-Croat Federation - was 50%, four percentage points down from the 2018 general election.

While the lower turnout has historically benefited Bosnia’s dominant nationalist parties, for the first time in 25 years many of their faithful voters appear to have sat out the vote.

The number of coronavirus cases in Bosnia has been rising sharply in recent weeks, with nearly a third of all infections registered just this month. So far, the country of 3.5 million people has tallied close to 72,000 virus cases and nearly 1,900 deaths, and its death rate continues to rise.

The pandemic has amplified Bosnia’s many problems, including an extreme shortage of doctors and nurses and rampant public corruption. A number of prominent government officials of different ethnic backgrounds are under investigation on suspicion of malfeasance in the procurement of desperately needed medical equipment.

Ahead of the vote in Bosnia’s largest cities, opposition parties, despite their ideological differences, closed ranks and campaigned on bread-and-butter issues rather than stoking ethnic tensions. In some cities, including Sarajevo, opposition parties united with a common platform and jointly fielded candidates.