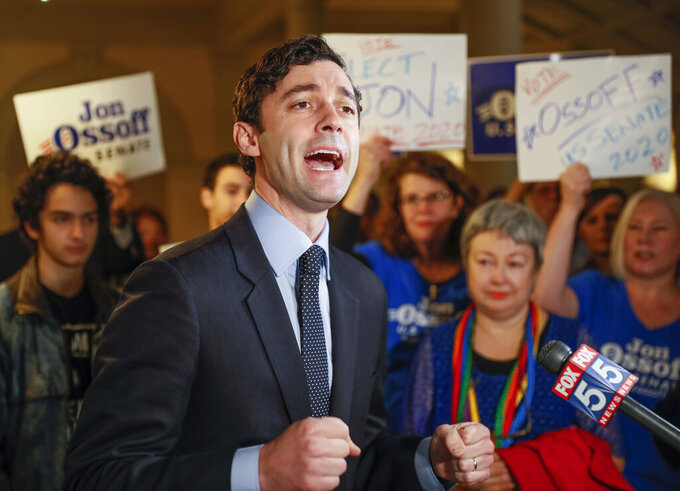 FILE - In this March 4, 2020, file photo, Jon Ossoff speaks to the the media and supporters after he qualified to run in the Senate race against Republican Sen. David Perdue in Atlanta. Republican Sen. David Perdue of Georgia is set to face Democrat Jon Ossoff in the first debate of their U.S. Senate race Monday afternoon, Oct. 12, 2020. (Bob Andres/Atlanta Journal-Constitution via AP, File)

ATLANTA (AP) — During their first debate, Democrat Jon Ossoff hammered Sen. David Perdue on his response to the coronavirus pandemic, while the Georgia Republican accused Ossoff of backing a “radical socialist agenda” — an assertion he sometimes backed with false claims.

The two rivals in the hotly contested Senate race had few kind words for each other Monday. Perdue called Ossoff “desperate,” and Ossoff said his opponent is so deeply entrenched in the “swamp” of Washington insiders that he lacks empathy for the problems everyday Americans are facing due to the pandemic.

Ossoff said the senator has downplayed the risk of COVID-19, compared it to the common flu and enabled President Donald Trump “in a pandemic response that everybody from all parties knows has been a disaster.”

“What we really did is we brought help to the people of Georgia, both in the hospitals, schools, communities and in the workplace,” Perdue said.

“Two hundred twenty thousand Americans have been killed and listen to you — not a shred of empathy — not a shred of personal responsibility (about) a virus that you told us posed low risk to our health,” Ossoff said.

Throughout the debate, Perdue accused Ossoff of being a “rubber stamp” for liberals’ wishes and of hiding his true “radical socialist agenda” — a phrase Perdue used at least six times during the hour-long debate.

Echoing his own false ads that have deluged Georgia TV markets, Perdue accused Ossoff of wanting to defund the police and said Ossoff has been getting support from the Community Party USA. Ossoff has said he does not want to defund the police and the claim about the Community Party USA is “flatly false,” the Associated Press has previously reported.

The debate, which was held virtually as a safeguard against the coronavirus, coincided with the first day of in-person early voting in Georgia. Voters in some areas waited several hours to cast a ballot Monday morning.

While statewide races in Georgia tend to favor Republican candidates, public polling shows a neck-and-neck battle between Perdue and Ossoff. That’s led to huge sums of money being spent on advertising by both the candidates and outside groups with a stake in the outcome.

Georgia’s other Republican-held U.S. Senate seat is also up for grabs this year, and more than $150 million has been committed to ads in the two races combined, including past spending and future reservations.

Perdue, 70, is a former business executive who is seeking his second term in the Senate. Ossoff, 33, heads a media company that investigates crime and corruption for news organizations.

Ossoff accused Perdue of hypocrisy for backing Barrett's nomination when he was against former President Barack Obama's 2016 nomination of Merrick Garland.

“Let's remember that four years ago, Sen. Perdue was adamant, he gave impassioned floor speeches on the floor of the Senate, that no confirmation of a Supreme Court Justice should proceed in a presidential election year. Now he's thrown those so-called principles aside,” Ossoff said.

Perdue said the situation in 2016 was “totally different” because the White House was controlled by one party and the Senate by the other, when today both branches are controlled by Republicans. Perdue also said Ossoff will be “nothing but a rubber stamp” on Democrats packing the Supreme Court by adding more seats should they take control of the Senate and White House, even though Ossoff has said he opposes efforts to pack the Supreme Court.

Perdue has previously lauded Barrett, saying in a recent statement that she “will be an exceptional Justice on the U.S. Supreme Court.”

Ossoff meanwhile has raised questions about what confirmation of Barrett would mean for the future of the Affordable Care Act, the health care reform law passed by Congress in 2010.

“Will Judge Barrett impartially uphold the rule of law and defend the public interest by upholding the Affordable Care Act, which prevents insurance companies from denying health coverage to Americans suffering from cancer, diabetes, heart disease, and other pre-existing conditions?” Ossoff asked in a recent news release.

The Supreme Court will soon hear arguments in a challenge to the law by the Trump administration and Republican-led states including Georgia.

Monday's debate, which is the first of three debates scheduled in the race, also included Libertarian candidate Shane Hazel.

“If you're tired of what you're seeing here between politicians, you've got a choice,” Hazel said.