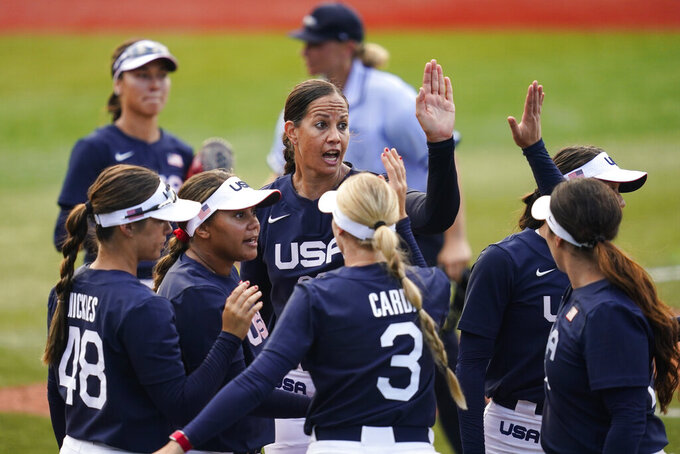 United States' Cat Osterman, center, reacts with teammates after the sixth inning of a softball game against Mexico at the 2020 Summer Olympics, Saturday, July 24, 2021, in Yokohama, Japan. (AP Photo/Matt Slocum)

YOKOHAMA, Japan (AP) — Turned down for a job in the U.S. coaching pool in 2016 after she retired as a player, Cat Osterman found she was not angry.

So she's back in the Olympics at age 38, and not just throwing but dominating.

Osterman pitched six innings of one-hit ball and Monica Abbott struck out the side in the seventh, helping the top-ranked U.S. shut out No. 5 Mexico 2-0 on Saturday.

Ali Aguilar provided a two-run single in the third that was just enough for the Americans to improve to 3-0 as the country tries to regain the Olympic gold medal.

“I’m here so they can win a gold medal because I already have one,” said Osterman, the last player remaining from the 2004 champions. “I want to see how they feel and how they react after we are able to possibly do that.”

Osterman didn't pitch competitively from 2016-18. At the Olympics, she and Abbott have combined on three one-hit shutouts over four days.

“We have a really tight family, and the two tall trees that are pitchers for us right now, they've kind of taken on the moniker of fire and ice,” U.S. coach Ken Eriksen said.

Osterman, sitting next to him, quickly added: “She's obviously fire, not me.”

“Once the idea was kind of in my head and my family was fully on board, my dad was like, 'I told you you should have done this the whole time,'" she said of her renewed playing career. “So I had a bunch of I told you so's, but it was just a gut check that I was making sure to do it for the right reasons.”

Abbott (1-0), a lanky Big Unit-like lefty who turns 36 on Wednesday, has a complete game and two three-out saves. She has given up one hit in nine innings with 15 strikeouts and three walks, throwing 129 pitches.

“Obviously they have a great pitching staff,” said Mexican reliever Danielle O’Toole, a former member of the U.S. national team program. “There’s a reason why, especially Cat and Monica, have been for playing so long, is because they are smart. They’re very intelligent people.”

Osterman struck out four, walked one and hit a batter. Pitching without a cap and with a white towel dangling from her back pocket on a 90-degree, humid afternoon, she retired her final 15 batters.

She escaped her only trouble in the second, when Suzannah Brookshire worked out an eight-pitch walk leading off and Victoria Vidales reached on an infield single that went off the glove of Kelsey Stewart at third. Chelsea Gonzales fouled out, Sashel Palacios took a called third strike and Stefania Aradillas struck out.

“She's throwing butterflies like that, trying to catch them in the wind as a hitter, that's kind of tough,” Eriksen said.

Mexico, a team with many U.S. college players and veterans of the American player development program, dropped to 0-3 in its first Olympic tournament.

After a day off, the action shifted to Yokohama Stadium, the 34,046-capacity downtown home of the Central League’s Baystars, which opened in 1978. With artificial turf, high fences and a symmetrical outfield, it resembles 1960s and ’70s cookie-cutter stadiums such as Philadelphia’s Veterans, Pittsburgh’s Three Rivers and Cincinnati’s Riverfront.

Haylie McCleney had two more hits and is 6 for 9. Mexico shortstop Anissa Urtez, who is engaged to U.S. right fielder Amanda Chidester, made a diving backhand stop to rob McCleney of a hit leading off the fifth.

Dejah Mulipola, getting her first start, walked leading off the third and McCleney singled before O’Toole replaced Dallas Escobedo (0-2).

O’Toole struck out Janie Reed and got Chidester to ground out, then intentionally walked Valerie Arioto. Aguilar followed with a single to center.

After pushing across just five runs in three games, the U.S. plays Australia on Sunday and host Japan on Monday to complete the group stage. The top two nations advance to Tuesday’s gold medal game.

“We’re not even close yet to playing our best softball,” Eriksen said, “and I think that’s going to happen pretty soon.”

Yu Yamamoto hit a two-run homer in the fourth, and Yamato Fujita started with two innings on the mound and then as a designated player added a three-run drive in the fifth.

Yamamoto drove a 66 mph fastball to the opposite field in right-center off Alexia Lacatena (0-1) for Japan’s first hit of the game and her second home run of the Olympics. She has five RBIs.

Miu Goto (2-0) struck out nine in five innings of one-hit relief, combining with Fujita on a three-hitter.

Jenn Salling and Erika Polidori hit early two-run doubles for Canada, and Australia left the bases loaded in each of the first two innings.

Canada improved to 2-1 behind 5 2/3 innings of shutout relief from Jenna Caira and Lauren Regula, the 39-year-old sister of retired All-Star outfielder Jason Bay.

Canada starter Sara Groenewegen walked Jade Wall with the bases loaded in the first, then escaped further trouble when she threw a called third strike past Michelle Cox and fanned Rachel Lack.

Caira started with nine straight outs. Tsitsikronis fouled off five 0-2 changeups, then struck out on an outside dropball, and Chelsea Forkin hit an inning-ending liner to first.

Regula pitched a 1-2-3 seventh and has thrown 2 1/3 scoreless innings.

Ellen Roberts (0-1) lasted one-third of an inning, giving up three runs — one earned — one hit and two walks as the Spirit fell to 1-2.