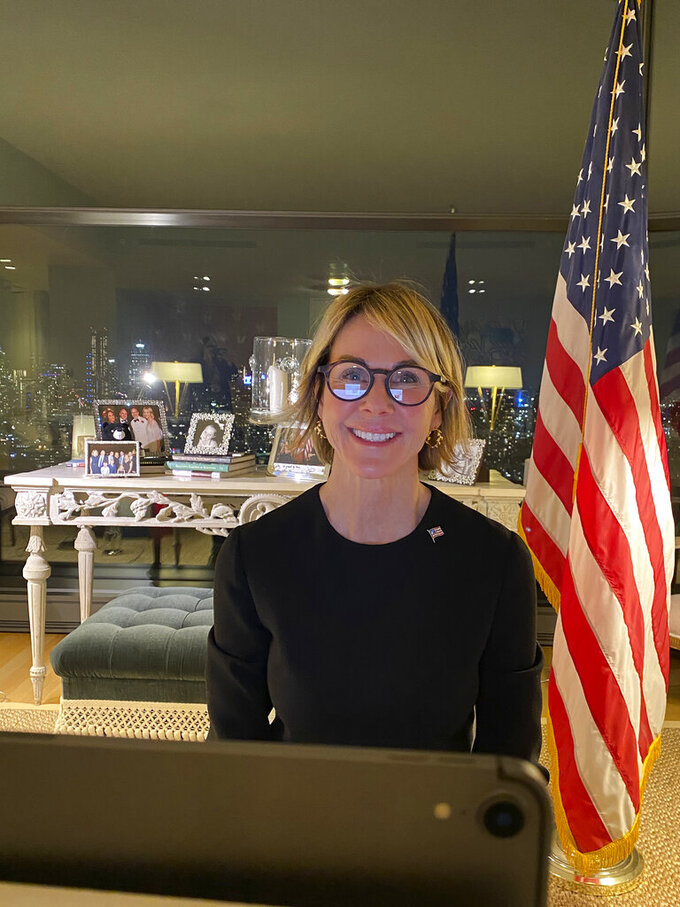 UNITED NATIONS (AP) — In a final swipe at China, the Trump administration’s outgoing U.N. ambassador tweeted that it's time for the world to oppose China’s efforts to exclude and isolate Taiwan, drawing sharp criticism from Beijing.

To make the point even more graphic, Ambassador Kelly Craft accompanied the tweet with a photo of herself in the U.N. General Assembly Hall where the island is banned. And she carried a handbag with a stuffed Taiwan bear sticking out of the top, a gift from Taiwan’s representative in New York, Ambassador James Lee.

Taiwan left the United Nations in 1971 when China joined. Beijing considers Taiwan a renegade province and has been using its diplomatic clout to stop its 23 million people from joining any organizations that require statehood for membership including the U.N. World Health Organization and the International Civil Aviation Organization.

American relations with Taiwan warmed under president Donald Trump, largely due to strong bipartisan support in Congress, but also because his administration was willing to defy Beijing’s threats and promote Taiwan as an alternative to Chinese Communist Party authoritarianism.

Craft met in September with Taiwan's New York representative and had been scheduled to visit Taipei last week, but her trip was canceled after then secretary of state Mike Pompeo banned all travel.

Undeterred, she held a virtual meeting with Taiwan’s President Tsai Ing-wen on the evening of Jan. 13, telling her: “The United States will always stand with Taiwan.”

Earlier that day, she went into the General Assembly Hall, stood at the speaker’s podium, and recorded a virtual address to Model U.N. students in Taiwan.

Craft followed up those events with a statement Tuesday — her last full day as ambassador — stressing that the United States “is determined to end" Taiwan's exclusion and isolation, and predicting this will continue with the administration of newly inaugurated President Joe Biden.

“The U.S. position on this matter enjoys universal bipartisan support,” she said, “and so, even as the United States is preparing for a transition, I can speak with great confidence that the U.S.-Taiwan relationship will continue to grow and strengthen.”

She called Taiwan “a force for good on the global stage -- a vibrant democracy, a generous humanitarian actor, a responsible actor in the global health community, and a vigorous promoter and defender of human rights.”

In a final salvo during Trump’s final hours in office on Wednesday, Craft tweeted her appeal for an end to Taiwan’s isolation and exclusion, saying: “All @UN member states should recognize the benefits of Taiwan’s meaningful participation in int’l organizations & the damage done by its continued exclusion.”

The spokesperson for China’s U.N. Mission, referring to Craft’s photo in the General Assembly Hall, tweeted back: “Without prior notice to the UN, you sneaked into the GA Hall to record the video. You have not only violated the guidelines for the use of UN premises but also broken the rules for prevention of COVID-19. You’re spreading virus literally. Time to stop!”

A spokesman for Craft responded Thursday saying: “Ambassador Craft was proud to speak with the youth of Taiwan from the floor of the U.N. General Assembly, to underscore the outrageous fact that Taiwan’s voice remains unwelcome in that Hall.”

In her speech to Taiwan’s Model UN, Craft told the students: “Stay firm, say the words of democracy even in the wake of this moment. Because one day, you, too, will be standing here.”

To reinforce her personal commitment, she ended her statement on Tuesday saying: “As my posting at the U.N. comes to a close, my mission will not be complete until the people of Taiwan have a voice.”