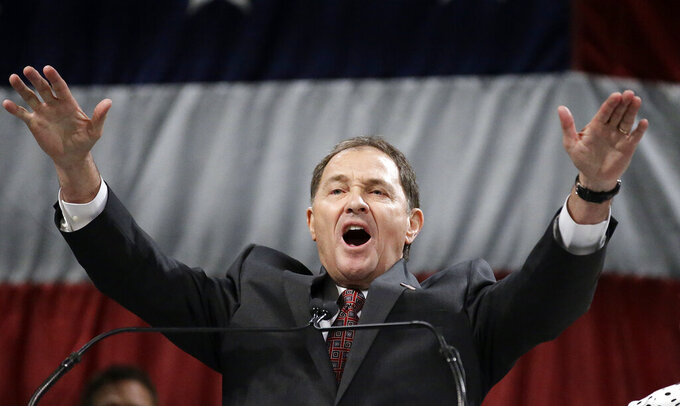 FILE - Utah Gov. Gary Herbert speaks during the Utah Republican Party 2016 convention on April 23, 2016, in Salt Lake City. Herbert is looking back on his 11-year tenure as his time as governor comes to an end. (AP Photo/Rick Bowmer, File)

SALT LAKE CITY (AP) — Gary Herbert has been in Utah’s highest office for over a decade, but his greatest challenge arrived less than a year ago.

The coronavirus pandemic brought death, economic upheaval and even angry crowds outside his personal home, away from the governor's mansion.

Herbert, a Republican, was one of several governors that resisted implementing stay-at-home restrictions or statewide mask mandates early in the pandemic. He instead stressed “personal responsibility,” pleading for months for people to follow public health guidelines.

Eventually, Herbert issued a statewide mask order and a two-week pause on social gatherings in November amid a surge in infections, but the decision was met with outrage by those who accused him of government overreach. Some went further, calling him King Herbert and comparing him to Adolf Hitler.

“People get angry and frustrated, and when they get emotional about issues, the first casualty is common sense,” Herbert told The Associated Press in a video interview Monday. “I’ve been disappointed that ... there’s so much pushback.”

The governor said there is little he would change about how his administration handled the pandemic but added that he was surprised by the backlash to the state’s restrictions. Anti-mask protesters came to his home in Orem following the announcement of the mask mandate. He called that “the wrong way” to protest.

“Some of their approaches were outlandish,” Herbert said. “We had one lady flipping off the neighbors there when they asked about it, which was just kind of crass and means that they really aren’t serious about it.”

The governor said he still believes that COVID-19 rules ideally should be made at the local and county levels and that he would not support President-elect Joe Biden implementing a nationwide mask order.

Herbert spent nearly two decades in public office in Utah before becoming governor in 2009. He was a Utah County commissioner for 14 years and then served as the state's lieutenant governor for five years.

As governor, Herbert said he is especially proud of improvements made to education and economic growth seen since the Great Recession. He had hoped to invest even more money in the education system this year before the pandemic hit.

“I can tell you that truthfully there’s never been a day that I’ve not looked forward to going into the office and working,” Herbert said. “Some challenges are a little harder than others, and sometimes the criticism that you get — even though you’re doing your level best — stings a little bit, but that’s just part of being in the arena.”

State Rep. Brian King, the House minority leader, said he appreciated that Herbert took a balanced approach when appointing judges and aggressively pushed for education funding. But the Democrat said he wished the governor would have enforced a statewide mask mandate earlier in the pandemic.

“We have this, quite frankly, juvenile pushback from people who say, ‘You can’t tell me I shouldn’t have to wear a mask,’" King said. “I begged the governor for months to put the force of law behind such an obviously important public health and public safety measure ... but he wouldn’t do it until just very recently, and it was still halfhearted.”

Herbert chose not to seek another term and will soon be replaced by Lt. Gov. Spencer Cox, who won the gubernatorial election in November. Cox's inauguration will take place on Jan. 4 — the 125th anniversary of Utah's statehood.

Herbert plans to spend more time with his wife and family after his term ends and said he may pursue teaching at Utah Valley University.

As COVID-19 vaccines have started shipping across the country, Herbert said he feels optimistic about the future and what the Cox administration will be able to accomplish.

“We can see daylight now at the end of the tunnel ... if we can get through Christmas now and have people do the right thing for the right reason,” he said.