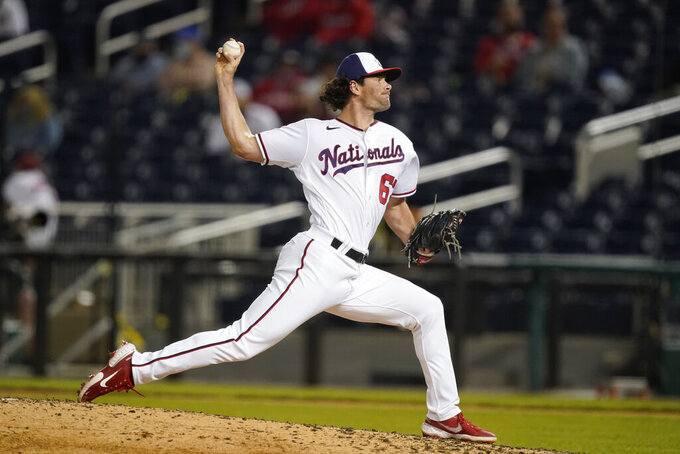 Washington Nationals pitcher Kyle Finnegan throws during the sixth inning of the team's baseball game against the Atlanta Braves at Nationals Park, Wednesday, May 5, 2021, in Washington. (AP Photo/Alex Brandon)

WASHINGTON (AP) — For the second time in two nights, the Washington Nationals walked Atlanta's Freddie Freeman intentionally to load the bases for Marcell Ozuna. This time, the slumping slugger made them pay.

“I start laughing,” Ozuna said of the walk to Freeman, “and then looking up, a little prayer like, ‘God, please give me the opportunity to get a base hit.’”

Ozuna, who popped out with the bases full on Tuesday and came in batting .195, did better than that, sending a first-pitch cutter from Erick Fedde (2-3) into the first row of bleachers in right-center to put Atlanta ahead 4-0 in the third inning. He savored the slump-busting slam with a colorful home run trot, dancing as he rounded second and pointing to the sky twice — once at a full stop.

“Ozuna coming up in that situation and especially hitting the ball the other way the way he did, that looked a lot like what he was doing last year,” Fried said.

Fried (1-1) allowed one run and four hits, struck out six and walked one, lowering his ERA from 11.45 to 8.44. He had been sidelined since April 14 with a strained right hamstring.

“That's as good as his stuff's been all year,” Braves manager Brian Snitker said. “The breaking ball, sinker had good life, the fastball was coming out of his hand really good. It just looked more like Max tonight.”

Rookie William Contreras hit his first career homer for the Braves in his third start since replacing the injured Travis d'Arnaud at catcher.

By taking the first two games of this series, the Braves have won seven of nine at Washington dating to last season, when they won their third straight NL East title.

Washington's Trea Turner hit his team-leading seventh homer, a two-run drive in the eighth inning off Josh Tomlin. A.J. Minter loaded the bases with two outs but got Victor Robles to pop out, and Will Smith worked the ninth for his sixth save in six opportunities.

Washington came in ranked 28th in the majors in runs per game at 3.52.

“I think we can perform a little better in all aspects. We haven't all clicked at the same time, but that's baseball,” Turner said. “I like that we battled. I like that we don't give up and we made it a game.”

Contreras singled leading off the third and advanced on a sacrifice bunt and a passed ball. Ronald Acuña Jr. walked and stole second on Fedde's first pitch to Freeman, leading to the intentional walk and setting up Ozuna.

His recent struggles aside, Ozuna's slam was hardly as surprising as those that preceded it for Atlanta — rookie Cristian Pache's first career homer in a loss to Toronto on Saturday night, and pitcher Huascar Ynoa going deep on Tuesday in Washington. The Braves hit grand slams in consecutive games for the first time since Eddie Pérez and Ryan Klesko did it on Sept. 16-17, 1997, according to Elias Sports.

Yan Gomes homered off Fried in the fourth.

Braves: Left-hander Sean Newcomb, who spent time on the injured list this season for an undisclosed reason, was optioned to Triple-A Gwinnett on Tuesday night ahead of Fried's return to the roster. Snitker said Newcomb needed regular work to get back to the form he showed early in the season.

Nationals reliever Kyle Finnegan struck out the side on nine pitches in the sixth, the fifth immaculate inning in franchise history and first since Strasburg on July 3, 2019.

Both managers said their clubs were nearing the 85% vaccination threshold for players and Tier 1 staff, which leads to the relaxation of some COVID-19 protocols, including mask requirements in dugouts and bullpens. Snitker said the Braves were eight or nine days away from hitting the number. Martinez said he's looking forward to not having to wear a mask in the dugout but said a few players “were still on the fence” about getting the vaccine. “They're asking questions about it, so that's good,” he added.