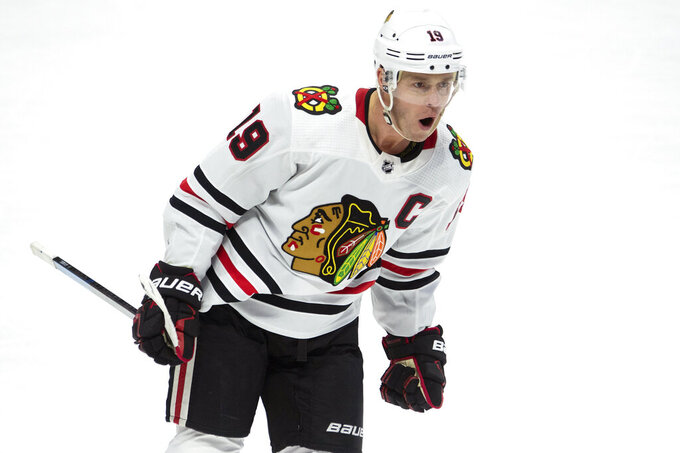 FILE - In this Jan. 14, 2020, file photo, Chicago Blackhawks center Jonathan Toews celebrates his game winning goal against the Ottawa Senators in overtime of an NHL hockey action in Ottawa. The Vegas Golden Knights think they are primed for another deep playoff run, especially with Max Pacioretty set to return after missing round-robin play with a minor injury. Standing in their way are Jonathan Toews and the resurgent Chicago Blackhawks. (Adrian Wyld/The Canadian Press via AP, File)

Max Pacioretty used some weights and a stationary bike to work out in his room during his quarantine period inside the NHL bubble in Edmonton. He rejoined the Vegas Golden Knights on Friday and skated with the team the past couple of days.

He's ready to go. Well as ready as he can be to step right into the NHL playoffs.

Pacioretty returns to a Golden Knights team aiming for another deep postseason run after it went 3-0 in round-robin play to secure the top seed in the Western Conference. Standing in their way in the first round are Jonathan Toews and the Chicago Blackhawks, fresh off an impressive performance against Edmonton in their qualifying series.

Game 1 is Tuesday night at the NHL hub in Alberta.

“Nothing can really simulate a playoff game, so just trying to work my hardest to make sure that I'm up to speed when I do return,” Pacioretty said.

The 31-year-old Pacioretty, who led Vegas with 32 goals and 66 points this season, was sidelined by a minor injury during training camp. He rehabbed in Las Vegas while the team traveled to Edmonton to begin playing again.

After entering the NHL bubble, Pacioretty had to wait in his room until he was cleared to be around his teammates again. The veteran winger was impressed with how his team played while he was out.

“It definitely stands out that we did our work over the break,” he said Monday on a video conference call. “The team looks like they're in shape. The team looks sharp.”

The return of Pacioretty strengthens Vegas' deep lines and power play, adding another proven scorer that the Blackhawks have to account for in their preparation.

“I know from playing with him at the Olympics and the World Cup, he's got an amazing shot,” Blackhawks star Patrick Kane said. “Against guys like that, you probably just want to limit their space and try as much as possible not to let him get that shot off.”

Chicago was a long shot for the playoffs when the NHL suspended its season in March because of the coronavirus pandemic. But the league decided to go with a 24-team format for its return to the ice, and the Blackhawks responded with a surprising four-game victory over the Oilers in the qualifying round.

The veteran core of three Stanley Cup wins looked invigorated against Edmonton, and rookie forwards Kirby Dach and Dominik Kubalik performed well in their first postseason series. But the Blackhawks are bracing for a bigger challenge with Pacioretty and the Golden Knights.

“They're a good team. We have a lot of respect for them," Toews said. “We know what they can do on both sides of the puck."

Way back in February, when Chicago traded Robin Lehner to Vegas, a reunion between the veteran goaltender and the Blackhawks in the first round of the playoffs seemed like a remote possibility — to put it mildly.

Following a strange turn of events, it's on.

Lehner or Marc-Andre Fleury could be in goal for coach Peter DeBoer in Game 1. The Blackhawks counter with Corey Crawford, who helped clear the way for the Lehner deal with his solid play.

“It’s going to be fun playing them,” Lehner said. “They’re a very good hockey team. I have a lot of respect for them, the whole organization."

The Blackhawks were one of the NHL's powerhouse teams for years, winning the Stanley Cup in 2010, 2013 and 2015. But they are enjoying the underdog role in their first playoff appearance since they were swept by Nashville three years ago.

“It’s a cool role to play," Kane said. "It’s exciting for your team when everyone is kind of counting you out and no one's really giving you a chance.”

Vegas took two of three against Chicago this season, winning 2-1 in a shootout on Oct. 22 and 5-1 on Dec. 10, and losing 5-3 to the Blackhawks on Nov. 13. But the Golden Knights went 6-0 against the Blackhawks during the franchise's first two seasons in the NHL.