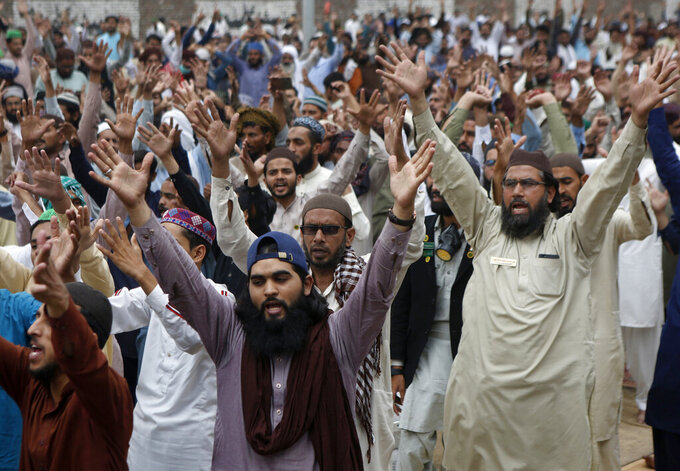 Supporters of Tehreek-e-Labiak Pakistan, a radical Islamist political party, chant slogans during a sit-in protest against the arrest of their party leader Saad Rizvi and demanding to expel the French envoy from the country, in Lahore, Pakistan, Friday, April 16, 2021. Pakistan briefly blocked access to all social media on Friday, after days of anti-French protests across the country by radical Islamists opposed to cartoons they consider blasphemous. (AP Photo/K.M. Chaudary)

LAHORE, Pakistan (AP) — Pakistan briefly blocked access to all social media on Friday after days of violent anti-French protests across the country by radical Islamists opposed to cartoons they consider blasphemous.

Sites including Twitter and Facebook were blocked for four hours on orders from the country’s interior ministry, said Khurram Mehran, a spokesman for Pakistan’s media regulatory agency. He gave no further details.

The move comes as police officials prepare to clear a large demonstration in the eastern city of Lahore, and just hours after the government said the now-detained leader of the outlawed Islamist political party at the forefront of the protests had urged his supporters to stand down.

By releasing a note they say was handwritten by Saad Rizvi, the government hopes to calm tensions after his Tehreek-e-Labiak Pakistan party stirred up the violent protests — in which four police officers were killed and 600 injured. France urged its citizens to leave the country.

Three demonstrators also died in the clashes with security agencies, and the government has imposed a ban on the party with Prime Minister Imran Khan's approval. Khan took to Twitter on Friday to pay tributes to policemen killed or injured in the violence. He said the violence was aimed at creating chaos and blackmailing his government.

Khan's government also banned coverage of Rizvi's party by the local media, while police registered cases against Rizvi for inciting violence that resulted in the killing of policemen.

A photo of the statement was released earlier by an advisor to the prime minister on Twitter, but neither Rizvi himself or any of his party leadership was immediately available for comment. Some of his followers insisted they hear or see the words come from Rizvi himself before stopping, and the Lahore protest continued after Friday prayers.

On Thursday, the French embassy in Pakistan advised all of its nationals and companies to temporarily leave the Islamic country, after violence erupted over Rizvi’s arrest.

Violent protests have ongoing in Lahore since Monday, damaging private and public property and disrupting the much-need supply of oxygen to hospitals. Some of the affected included COVID-19 patients, who were on oxygen support.

In the statement, Rizvi asked his supporters to peacefully disperse for the good of the country and end their main sit-in that began Monday, when police arrested the radical cleric for threatening protests if the government did not expel the French ambassador before April 20.

Rizvi's arrest sparked violent protests by his followers, who disrupted traffic by staging sit-ins across the country. Although security forces cleared almost all of the rallies, thousands of Rizvi’s followers are still assembled in Lahore, vowing to die in order to protect the honor of Islam's Prophet Muhammad.

Rizvi became the leader of the outlawed Tehreek-e-Labiak Pakistan party in November after the sudden death of his father, Khadim Hussein Rizvi. His party also wants the government to boycott French products.

The images had been republished by the satirical magazine Charlie Hebdo to mark the opening of the trial over the deadly 2015 attack against the publication for the original caricatures.

That enraged many Muslims in Pakistan and elsewhere who believe those depictions were blasphemous. Rizvi’s group in recent years became known for opposing any change to the country’s harsh blasphemy laws, under which anyone accused of insulting Islam or other religious figures can be sentenced to death if found guilty.