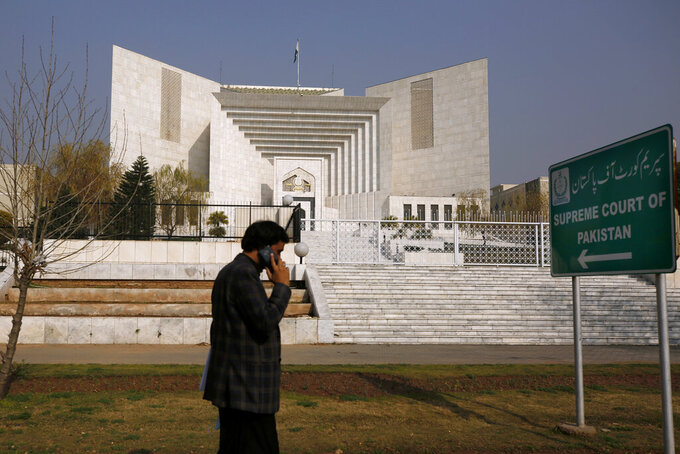 A Pakistani walks past the Supreme Court building in Islamabad, Pakistan, Wednesday, Feb. 10, 2021. In a landmark ruling, Pakistan's top court on Wednesday commuted the death sentences of two mentally ill prisoners who have spent decades on death row, the first such ruling in this conservative Muslim-majority nation. (AP Photo/Anjum Naveed)

ISLAMABAD (AP) — In a landmark ruling, Pakistan's top court on Wednesday commuted the death sentences of two mentally ill prisoners who have spent decades on death row, the first such ruling in this conservative Muslim-majority nation.

The decision by the Supreme Court was quickly hailed by Justice Project Pakistan, a rights group that has fought an extensive, years-long legal battle for the two inmates.

One of the two prisoners whose sentence was commuted, Kanizan Bibi, has spent 30 years on death row. She was 16 when she was charged with murdering her employer’s wife and five children. The police said she was having an affair with her employer, who was also arrested and later hanged. She was diagnosed with schizophrenia in 2000.

The second prisoner on death row whose sentence was commuted, Imad Ali, 55, was convicted of murdering a religious scholar in 2001. He was diagnosed with schizophrenia in 2008. In 2016, Pakistan’s Supreme Court halted the execution of Ali, just days before he was to be hanged.

“Because of certain misconceptions, the implications of mental illness are overlooked and the vulnerability or disability that it causes is not given due attention,” Judge Manzoor Ahmad Malik said in his opening remarks Wednesday before a five-member panel of the court.

Pakistan in 2008 ratified an international convention that prohibit the execution of mentally ill prisoners. Since then, only one mentally ill prisoner was executed, Muneer Hussain. He was hanged in April 2015 despite having had a history of mental illnesses, according to the rights group.

Last year, with the outbreak of the coronavirus pandemic and the steep rise in COVID-19 cases in Pakistan’s crowded jails, the Supreme Court of Pakistan agreed to release some mentally ill and disabled prisoners to ease conditions, but only those whose sentences were less than three years.

Bibi and Ali's sentences were commuted to life in prison, which in legal terms in Pakistan usually means no longer than 14 years. The time they already spent behind bars will count as sentence served and the two will be released if a medical board approves it. Otherwise they would be under treatment in a hospital for the mentally ill.

In its ruling Wednesday, the Supreme Court also ordered prison officials to file a fresh mercy petition for a third prisoner, Ghulam Abbas, who has spent more than 15 years on death row, according to Zainab Manzoor, a lawyer for Justice Project Pakistan.

Pakistan's President Arif Alvi has the authority to pardon Abbas.

Munawar Hussain, a cousin of Bibi, welcomed the court order and praised the judges for giving her justice. He said Bibi faced hardship during her life in prison and it was the family's wish that she spend the rest of her life with relatives.

In a statement, Rimmel Mohydin, a Pakistan campaigner for the rights group Amnesty International, said the ruling provides a precedent for doing away with death penalty sentences for those with mental disabilities.

“This landmark judgment from Pakistan’s Supreme Court marks an important development not only for the death penalty, but also for mental health," she said. “Imdad Ali and Kanizan Bibi should have been taken off death row the moment their history of severe mental disabilities was brought to the fore."

Mohydin called on Pakistan to abolish the death penalty and “re-establish an official moratorium on all executions as a first step in that direction.”

Pakistan halted executions between 2008 and 2014 due to pressure from international human rights groups but lifted the moratorium following a Taliban attack on a school in Peshawar in December 2014 that killed 150 people, nearly all of them children.

Since then, Pakistan has executed 515 inmates. More than 4,200 are still on death row at prisons in the country.