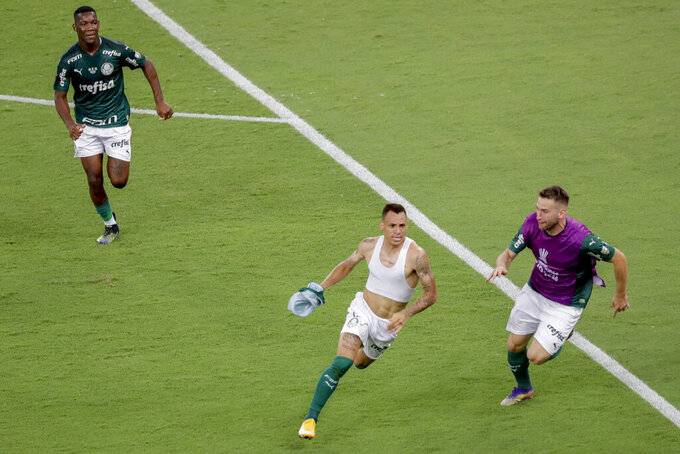 RIO DE JANEIRO (AP) — Substitute Breno Lopes scored deep into stoppage time as Palmeiras won its second Copa Libertadores title on Saturday with a 1-0 victory against Santos in an all-Brazilian final. It was the first South American title for the Sao Paulo club since 1999.

Palmeiras won with its first shot on goal in a dull and disappointing match.

“I could never dream this could happen in my life, just the other day I was playing in the second division,” Lopes said.

A Portuguese coach won the prestigious South American title for the second straight time. Palmeiras' Abel Ferreira, who took over in November, follows the footsteps of Jorge Jesus, who won the previous final with Flamengo.

The Copa Libertadores title was also the first title for 42-year-old Ferreira as a manager.

The two Sao Paulo teams were bitter rivals in the 1960s, and some fans of both sides travelled to Rio de Janeiro to cheer from outside the Maracana stadium despite the coronavirus threat.

Little-known Lopes joined Palmeiras in November, coming from second division team Juventude. Ferreira brought him on at 84 minutes, replacing midfielder Gabriel Menino and intending him to be a target man for crosses.

The plan worked perfectly nine minutes into stoppage time. Rony crossed from the right and found Lopes, who headed the ball to the left of Santos goalkeeper John.

Although fans weren't allowed, the final did have 4,000 invited guests watching the match, without too much apparent regard for social distancing. Some of them did not wear protective masks. All took COVID-19 tests to be able to attend, the South American soccer confederation said.

Palmeiras will be South America’s representative in the FIFA Club World Cup in Qatar. Its opponent in next Sunday's semifinal will be either Mexico’s Tigres or South Korea’s Ulsan.

Palmeiras had an impressive campaign in the Copa Libertadores. One highlight for the green and white team was a 3-0 win against River Plate in the semifinals in Buenos Aires.

Santos coach Cuca, who won the South American club title in 2013 with Atletico Mineiro, was hospitalized for weeks with COVID-19 in October. Brazil has had more than 220,000 deaths linked to the virus and less than 1% of the population has been vaccinated.