A pandemic atlas: No longer in viral denial, Iran struggles 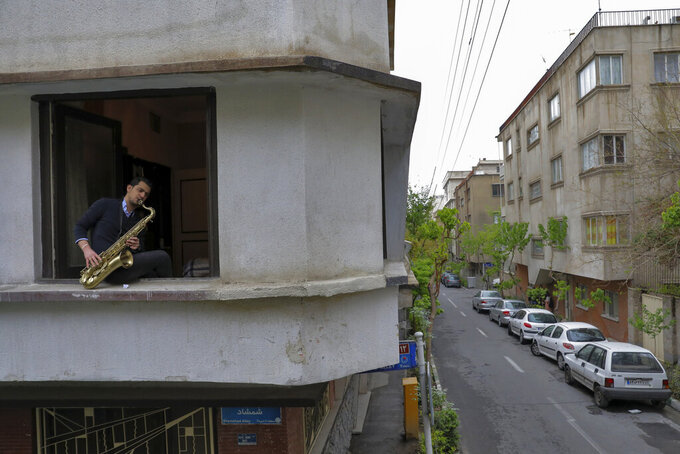 Mohammad Maleklee, 23, of the National Orchestra of Iran and Tehran Symphony, plays saxophone from his window, during mandatory self-isolation due to the new coronavirus disease outbreak, in Tehran, Iran on Wednesday, April 8, 2020 photo. With performance halls closed, musicians find performance spaces wherever they can. (AP Photo/Ebrahim Noroozi)

That was then. This is now: Even Supreme Leader Ayatollah Ali Khamenei has worn disposable gloves while planting a tree for state media, and he prayed in an empty mosque to mark the holy Shiite commemoration of Ashoura.

The coronavirus pandemic has only grown worse in Iran in the course of the year, threatening everyone from the day laborer on the street to the upper reaches of the Islamic Republic. Now the virus has sickened and killed top officials, becoming perhaps Iran’s greatest threat since the turmoil and war that followed its 1979 Islamic Revolution.

Crushed by U.S. sanctions, Iran has avoided the full lockdowns seen in other countries as it struggles to keep its anemic economy alive. Those who must work each day to eat — whether from the sweat of construction or driving a taxi through Tehran’s clogged streets — do not have the luxury of being able to stay at home.

Even efforts aimed at limiting some travel have been met with chaos, with online videos repeatedly showing drivers ignoring police to speed off to the Caspian Sea for long weekends. Efforts to close shrines saw hard-liners push their way into two in March.

And the toll just keeps rising, say the officials at Tehran’s massive Behesht-e-Zahra cemetery, already the final resting place of some 1.6 million people.

“All of the crises that we have experienced at this cemetery over the past 50 years of its history have lasted for just a few days or a week at most,” manager Saeed Khaal said. Never before — not during earthquakes or even the country’s 1980s war with Iraq — has the pace of bodies flowing into Behesht-e-Zahra been so high for so long, he said.

The spread of the virus in February came as Iran held a parliamentary election in which officials sought to boost turnout as a sign of support in the government. The country also marked the 41st anniversary of its 1979 Islamic Revolution with robust demonstrations. Those mass events likely fueled the virus’ spread.

Iran has asked the International Monetary Fund for $5 billion, potentially its first-such loan since 1962, though that has not yet been granted amid the U.S. pressure campaign that began after President Donald Trump unilaterally withdrew from Iran’s nuclear deal with world powers. Those sanctions, while allowing for humanitarian aid, have crushed Iran’s rial currency and made international purchases of medicine and equipment much more difficult.

Meanwhile, Iran's own response has been hampered in part by mixed messages as the crisis worsened in the fall. The country requested aid from the international community, then revoked an offer allowing Doctors Without Borders to work in Isfahan. Khamenei also refused U.S. aid, citing a baseless conspiracy theory claiming the virus could be man-made by America.

In October, Health Minister Saeed Namaki warned of “hospitals full of patients,” but then the next day reportedly said: “We should never announce that we don’t have empty beds. We do have empty beds.” Authorities ordered face masks to be worn, then set the cash fine at just 500,000 rials, or $1.60. All as Iran hit ever-increasing records for its reported daily deaths and case counts — numbers long suspected of being below the true toll of the pandemic.

What awaits Iran in winter remains in question.

Nearly half of the country's recorded coronavirus deaths have come from Tehran. Authorities in November proposed a monthlong nightly business curfew in the capital and 30 other major cities and towns, asking nonessential shops to keep their workers home.

But whether that will have an effect remains in question. The streets were far from empty, and there was no noticeable police presence to enforce the curfew.