Pandemic could lead to pandemonium on offensive lines 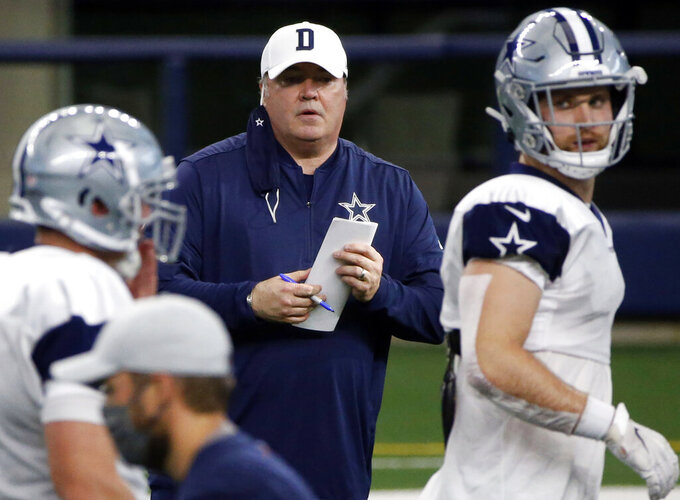 FILE - In this Aug. 30, 2020, file photo, Dallas Cowboys head coach Mike McCarthy watches practice during an NFL football training camp in Arlington, Texas. The coronavirus pandemic could lead to pandemonium on offensive lines throughout the NFL. “As you watch the linemen in particular, their pad level starts out high, their fits on their blocks are not as tight, the timing of how the combination block occurs going onto the second level's inconsistent,” says new Cowboys coach McCarthy. (AP Photo/Michael Ainsworth, File)

The coronavirus pandemic could lead to pandemonium on offensive lines throughout the NFL.

With no on-field offseason programs, no preseason games, no extensive hitting in training camps, chaos rather than cohesion could be the truism for blockers.

Don't think for a minute that won't affect even the best offenses.

“As you watch the linemen in particular, their pad level starts out high, their fits on their blocks are not as tight, the timing of how the combination block occurs going onto the second level's inconsistent,” says new Cowboys coach Mike McCarthy. “But as you go through camp, those things start to tighten up and you get the proper fits.”

Hopefully. But offensive lines are built on continuity and communication as much as skill and power.

Teams such as the Jets, who have redone their blocking unit with more talented players rather than holdovers, would be gambling even in normal times. Of course, 2020 is anything but normal.

“We’re doing everything we can to build that chemistry whether we’re on the field, getting after it, competing against one another," Jets left guard Alex Lewis said.

Lewis came in a trade with Baltimore last year and started 12 games, so he's among the senior offensive lineman in New York.

"We’ve got group chats going on with each other to joke around and build that chemistry up. We’re talking through the playbook with each other after the runs in the locker room and quizzing each other, just pushing one another. That’s the best way you can build chemistry right now.”

The Jets are the fourth team since 2010 to have five different starters in Week 1 from the five that started the opener in the previous season. Lewis ended last year as the starter, but was a backup to Kelechi Osemele when 2019 began.

Nothing helps more than experience together, something the Jaguars have. Those common ties, though, fade away if the players aren't diligent about their craft.

“You know, that’s interesting because the thing about this offseason, all of the pressure was on the individual player in terms of how he returned," said Jacksonville offensive line coach George Warhop.

"They didn’t have Milo (strength and conditioning coordinator Tom Myslinski) in the weight room to monitor them, they weren’t around us to be monitored. So, it was going to be a direct indication of what their commitment was to how they wanted to come back, and there was nobody else responsible for it but themselves.

“That was made very clear in our encounters and our meetings, that ‘Hey listen, when you come back here, if you’re not in shape, this is going to fall on your shoulders, nobody else’s.’ And those guys listened to that and they all worked.”

Working hard should be a given for any professional athlete. So is being in top physical condition.

The mental part of the game, well, that can be particularly challenging for veterans and newbies. Consider that a bunch of rookies figures to be starters on offensive lines across the league, including first-round draft picks Andrew Thomas (Giants), Mekhi Becton (Jets), Jedrick Wills (Browns), Austin Jackson (Dolphins), Cesar Ruiz (Saints), and Tristan Wirfs (Buccaneers).

“Thankfully, we are all veterans and we’ve all played football before, so it’s not our first time on the field," he says, ignoring Mecton's huge presence.

"It’s just going to be our first time next to each other. So the biggest challenge when you have a new group like that is that we all speak football, but we might call things by different names. So we’ve just got to get on the same page with our communication if we want to be effective and hit the ground running fast. So there’s going to be a learning curve, but I don’t think it will be this insurmountable obstacle that we can’t figure out.”

With all the obstacles NFL players have faced just getting this far, maybe togetherness in the trenches isn't such a major consideration. At least until everyone looks around to see quarterbacks consistently getting sacked.