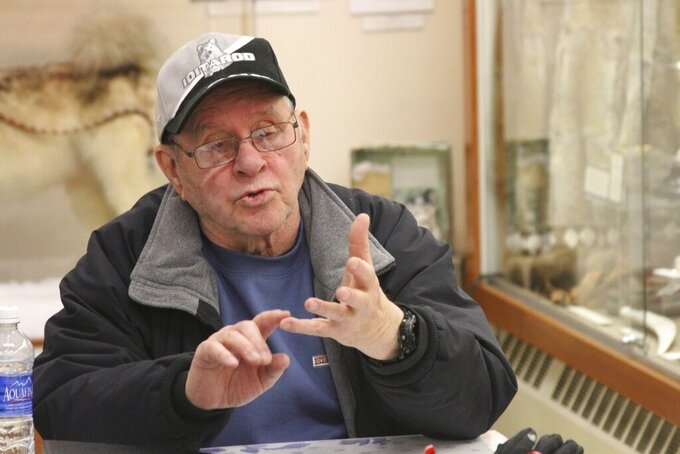 FILE - In this March 14, 2014, file photo, Howard Farley, who helped organize Nome as the end of the Iditarod Trail Sled Dog Race ahead of the first running in 1973, is seen at the Carrie M. McLain Memorial Museum in Nome, Alaska. The world's most famous sled dog race starts Sunday, March 7, 2021, without its defending champion in a contest that will be as much dominated by unknowns and changes because of the pandemic as mushers are by the Alaska terrain. (AP Photo/Mark Thiessen, File)

ANCHORAGE, Alaska (AP) — Traveling across the rugged, unforgiving and roadless Alaska terrain is already hard enough, but whatever comforts mushers previously had in the world’s most famous sled dog race will be cast aside this year due to the pandemic.

In years past, mushers would stop in any number of 24 villages that serve as checkpoints, where they could get a hot meal, maybe a shower and sleep — albeit “cheek to jowl” — in a warm building before getting back to the nearly 1,000-mile (1,609-kilometer) Iditarod Trail Sled Dog Race. When the race starts Sunday north of Anchorage, they will spend the next week or so mostly camping in tents outside towns, and the only source of warmth — for comfort or to heat up frozen food and water — will come from their camp cookers.

This year’s Iditarod will be marked by pandemic precautions, a route change, no spectators, the smallest field of competitors in decades, the return of one former champion and the swan song of a fan favorite, all against the backdrop of pressure on the race and sponsors by an animal rights group.

The most noticeable change this year will be no spectators. The fan-friendly ceremonial start in downtown Anchorage, which draws thousands of people, has been canceled, and the actual start in Willow of the race is being moved to a boat dock 7 miles (11 kilometers) out to help cutdown on fans who would normally attend the race start just off a main highway. Urbach is encouraging fans to watch the race start and finish live on TV or on the Internet.

The route has also been shortened to 860 miles (1,384 kilometers). For the first time in the race’s 49-year history, the finish line will not be in Nome.

Instead, mushers will go from Willow to the mining ghost towns of Iditarod and Flat, and then back to Willow for the finish. This, Urbach notes, was the original vision of the race co-founder, the late Joe Redington.

Howard Farley, 88, of Nome remembers that well. He disagreed with it in the early 1970s when Redington proposed it, and he’s against it now.

He said he told Redington before the first Iditarod in 1973: “There’s nobody in Iditarod. It’s a ghost town. There’s nobody there to clap. I said, ‘Just bring it to Nome.'"

The Iditarod could have easily and safely held the finish in Nome again this year, too, he said.

“It just makes me sad that all of our work and all of our prayers down through the years have come to this,” Farley said.

Since the mushers will have to double back to Willow for the finish, they will go over the Alaska Range twice. Mushers will have to navigate the dangerous Dalzell Gorge and the Happy River Steps, or a series of steep switchbacks that routinely leave competitors bruised and sleds broken.

In an effort to prevent the spread of the virus, the Iditarod will skip most of the communities to help prevent any transmission, leaving mushers to sleep in tents specially made for Alaska's tough weather or under the stars in temperatures that could be well below zero.

Urbach has had challenges at every turn as he tries to pull off the second Iditarod during the coronavirus pandemic. The virus took its hold on the U.S. in the middle of last year’s race, one of the few major sporting events not to be canceled in March 2020, when they learned to deal with the pandemic on the fly.

Defending champion Thomas Waerner is not the race, telling The Associated Press “it is impossible to plan ahead” during the pandemic. Last year, he and his dogs were stranded in Alaska for months because of travel restrictions after his win. They only made it home to Norway after hitching a ride on an airplane that was being flown from Anchorage to its new home at a museum in Oslo.

The race will start with 47 mushers, the smallest field in decades. This year’s field includes four former champions, including two four-time winners, Martin Buser and Dallas Seavey. Buser last won in 2002; Seavey collected his four titles over a five year span, ending with his last championship in 2016.

Seavey last raced the Iditarod when he came in second in 2017, when Iditarod officials said four of his dogs tested positive for a banned opioid painkiller. He adamantly denied giving his dogs the painkillers. The next year, the Iditarod reversed its decision and cleared Seavey, but he took his dogs to Norway to race instead.

At only age 34, Seavey is considered by many to someday match and perhaps surpass the win total of the race’s most decorated musher, Rick Swenson who collected five championships between 1977-1991.

“Five would be awesome,” Seavey said. “I’m going to do my best to win this. If I get beat, which is a pretty likely outcome ... whoever beats me is going to earn it.”

While Seavey returns, one of the sport’s most liked mushers is bowing out after this year’s race. Aliy Zirkle, 50, announced on her website last month that it was time to retire. Zirkle has finished in the top 10 seven times since 2002, and finished second three years in a row starting in 2012. She has never won.

The individual prize money for the world’s premiere sled dog race hasn’t been determined. Waerner picked up about $50,000 and a new Dodge pickup for winning last year’s race. However, Chrysler through its Anchorage dealership dropped sponsorship of the Iditarod after that race.

The animal rights group People for the Ethical Treatment of Animals has been applying pressure on national sponsors, claiming credit for ExxonMobil announcing it would end its sponsorship after this year's race.

PETA claims the race is cruel to dogs, and says more than 150 have died during races since the first in 1973. The Iditarod disputes that number but has not provided its count to The Associated Press despite many requests over the years.

He said PETA is “inflammatory and grossly inaccurate" in their approach, but admitted it creates a difficult dynamic for the race.

However, Urbach said they are trying to change the narrative, continuing to promote dog wellness, nutrition, training and breeding on its website.

The Iditarod has had two other financial hits this year. Because of the pandemic, fundraisers have been canceled, and they have spent thousands of dollars on personal protective equipment and COVID-19 tests. They also reduced the entry fee in half and reduced the total prize purse by 20%, to $400,000.