Pandemic forcing NBA players to work out with what's on hand 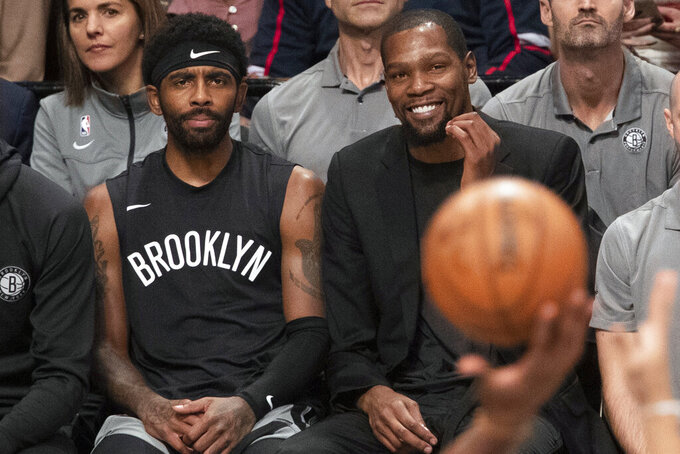 FILE - In this Nov. 1, 2019, file photo, Brooklyn Nets' Kyrie Irving, left, and Kevin Durant watch the game action from the bench during the second half of an NBA basketball game against the Houston Rockets in New York. With so much uncertainty around the NBA season, Brooklyn Nets general manager Sean Marks is no longer ruling Kevin Durant out for the season. Marks had repeatedly said he didn't expect Durant to play this season while recovering from Achilles tendon surgery, but he acknowledged Wednesday that everything is unknown now that the season is suspended because of the new coronavirus. Even Kyrie Irving, who had shoulder surgery on March 3, might be available if play stretched into the summer. (AP Photo/Mary Altaffer, File)

MILWAUKEE (AP) — Giannis Antetokounmpo is spending much of his time during the coronavirus-imposed hiatus working out, helping care for his newborn son and playing occasional video games.

What the reigning MVP isn’t doing very often is shooting baskets since the NBA has closed team practice facilities.

“I don’t have access to a hoop,” the Milwaukee Bucks forward said Friday during a conference call. “A lot of NBA players might have a court in their house or something, I don’t know, but now I just get my home workouts, (go) on the bike, treadmill, lift weights, stay sharp that way.”

The hiatus is forcing thousands of athletes, pro and otherwise, to work out from home as they try to keep in shape. Equipment varies from player to player, too.

“It all comes down to what they have and what they’re capable of doing,” Atlanta Hawks coach Lloyd Pierce said. “We can do a lot of body weight stuff. That’s how they stay ready. That’s the most I can offer as a coach for them to stay ready. I can’t say ‘Hey, can you find access to a gym?’ That would be bad management on my part.’’

For instance, Pierce said Hawks guard Kevin Huerter has access to a gym in New York and guard Jeff Teague owns a gym in Indiana.

“I’ve seen LeBron’s Instagram,” Pierce said of Los Angeles Lakers superstar LeBron James. “LeBron has a house with a full weight room and he has an outdoor court. He’s got a different reality right now that gives him a little more access to continue the normal. (Hawks rookie) Cam Reddish lives in an apartment and it’s probably a two-bedroom apartment. He can’t go in the apartment weight room because it’s a public facility. So he’s limited in all things.’’

Bucks coach Mike Budenhlolzer said he wanted his players to focus on keeping their bodies in shape and conceded that logistics surrounding the pandemic would make it tougher for them to do any basketball-specific activities.

The Bucks are still finding ways to stay sharp.

Bucks players said team officials have made sure they all have the necessary exercise equipment. Antetokounmpo noted the Bucks also had a catering company bring food to make sure they maintain a proper diet. Center Brook Lopez said workout plans have been sent to them via a phone app.

“They’ve done a really good job of getting everything taken care of and still having tailored workouts for each individual player despite the situation,” Lopez said.

But it’s difficult for them to work on their shooting without access to a court.

“Since the practice facility is closed down, I don’t have any access to a basketball goal unless I go to one of my neighbors’ houses and shoot outside,’’ Bucks forward Khris Middleton said. “There’s really no basketball for me. It’s basically like Giannis said. Treadmill, jump rope, some weights and that’s it. I have a couple of basketballs I can dribble in my house or outside, but no actual goal to shoot on.”

Pierce noted that Huerter recently asked him when players would be able to get back into the Hawks’ practice facility.