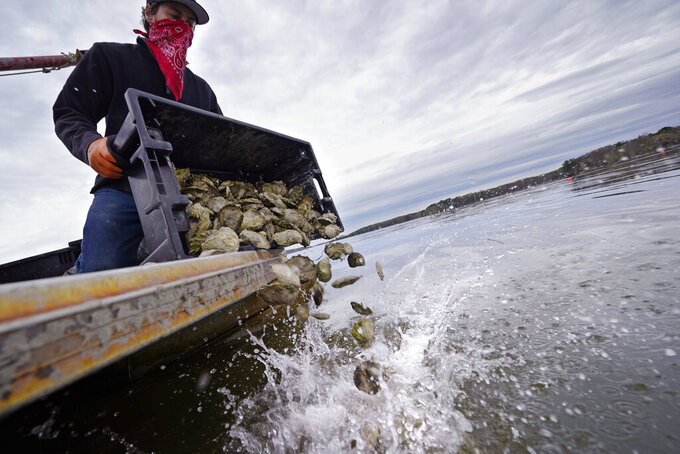 Kyle Pfau, an oysterman with Fat Dog Shellfish Co., dumps out a tray of adult "Uglie" oysters from Maine onto a relocation area at Great Bay, Monday, May 3, 2021, in Durham, N.H. Thousands of Uglies from Maine, which were left to grow due to lack of retail demand of more than a year because of the virus outbreak, were relocated to Great Bay to enhance the shellfish species in New Hampshire coastal waters. (AP Photo/Charles Krupa)

Then, Burtis heard The Nature Conservancy in partnership with The Pew Charitable Trusts was buying millions of bivalves around the country for rebuilding decimated oyster reefs — and he quickly joined the effort.

One recent day, he pulled up cages packed with eastern oysters on the New Meadows River in Brunswick, Maine, readying them to be trucked to oyster reefs on a patch of New Hampshire’s Great Bay.

“Yeah. it really has been kind of a lifesaver to be able to keep some revenue coming in,” said Burtis, decked out in orange waders as he poured the caged oysters into shipping crates.

The program, known as Supporting Oyster Aquaculture and Restoration or SOAR, is spending $2 million from an anonymous donor to buy more than 5 million oysters in New England, the Mid-Atlantic and Washington state to restore shellfish reefs at 20 locations. The Nature Conservancy is coordinating its efforts with the National Oceanic and Atmospheric Administration and U.S. Department of Agriculture, which offered similar but smaller programs in several states.

The SOAR program was launched in October with a goal of helping more than 100 oyster farmers, many who lost as much as 90% of their business during the pandemic. Their bigger oysters — known as Uglies because they’re too large for the traditional raw bar market — were piling up on farms due to a lack of demand, and the growing surplus was causing prices to crater.

Farmers needed to find a way to offload the oysters — and the program was made to order. It paid an industry—negotiated price of about 20% below pre-pandemic prices.

“What had started off as a great year for oysters going out to the restaurants just immediately stopped once the restaurants closed,” said Brian Gennaco, owner of the Dover, New Hampshire-based Virgin Oyster Company, which has sold oysters to the program and was among oyster farmers placing them in the Great Bay.

“We were on the farm looking around saying what are we going to do,” he said. “We have these oysters and they are going to outgrow the market if we can’t get them off the farm.”

The Nature Conservancy saw an opportunity to jump-start long-running efforts to rebuild oyster reefs, which the group says have declined an estimated 85% globally due to pollution, overharvesting, development and the emergence of several deadly pathogens. Oyster reefs provide habitat for fish and other wildlife as well as bolster shoreline protection. They also help clean polluted waterways, since the larger bivalves can filter as much as 50 gallons (189 liters) of water each day.

“It’s the major silver lining that comes out of the global pandemic for oysters,” said Alix Laferriere, the marine director for the conservancy in New Hampshire, who was on one of several boats in the Great Bay deploying more than 20,000 oysters.

“The growers get money during a global pandemic and we can use their oysters for conservation,” she said. “Great Bay used to be covered in oyster reefs. And because of historical overharvesting, disease and environmental stressors, a lot of those oyster reefs are gone. We need to do oyster restoration to replace those ecosystem services that are lost.”

Since 2009, the group has deposited nearly 3.5 million oysters to help rebuild nearly 30 acres (12 hectares) of reefs in the Great Bay. Unlike SOAR, those oysters were raised from larvae at the University of New Hampshire's Jackson Estuarine Laboratory.

On a recent morning, a van load of oysters arrived on the docks of the Jackson lab. The smells of sea water wafted out as the back door swung open. An army of oyster farmers dragged the crates down the wooden dock and onto three waiting boats.

As a bald eagle flew overhead, the oysters were transported to a patch of a protected waters near an uninhabited island where the farmers dumped the crates into the tranquil bay waters. They will remain there to begin proliferating and building new reefs.

The efforts come at a critical time for oyster recovery in New Hampshire — which has seen its oyster reefs decline from around 900 acres (364 hectares) to around 100 acres (100 hectares).

The population along much of the East Coast has been decimated primarily by two pathogens that arrived in the 1990s and shorten the bivalves lifespan from upwards of 15 years to three or four. The pathogens cause oyster shells to become porous and brittle.

The hope is that oysters from farms — most resistant to the pathogens — could bolster the ongoing restoration efforts.

Laferriere said her organization tried it on a smaller scale in 2018 and found that none of the 20,000 the oysters were sickened by disease and 71% survived.

Raymond Grizzle, a University of New Hampshire professor who has studied oysters in the bay for two decades, welcomed the restoration effort. But he said it was too early to say what the long-term impact of introducing farmed oysters will be on the the reefs. He works with the conservancy but did not help with the SOAR program.

The theory, Grizzle said, is that the disease-resistant oysters will breed with those in the wild, enhancing the population’s resistance to disease.

This story has been corrected to show the proper spelling of the last name is Burtis, not Bertis.