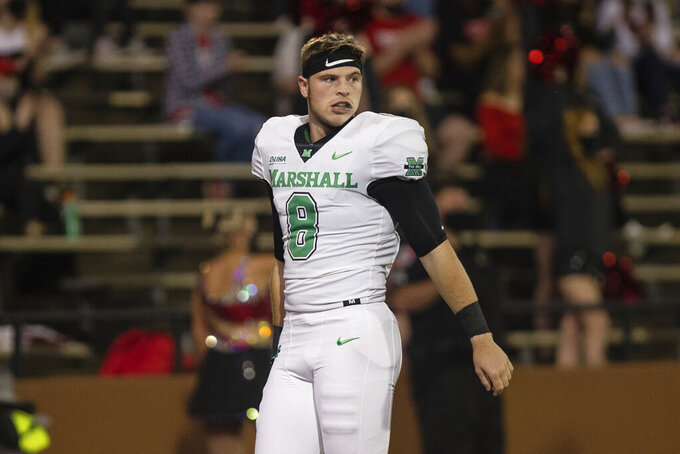 Florida Atlantic coach Willie Taggert held up two crossed fingers for luck in predicting he would have enough players available at No. 22 Marshall on Saturday.

“Right now, in the world we live in, you never know,” Taggert said.

Florida Atlantic has seen one disruption after another during the coronavirus pandemic.

The Owls (1-0, 1-0 Conference USA) had five of their first six games postponed or canceled. The only one they've actually played was a 21-17 victory at home over Charlotte on Oct. 3, the first win for their new coach.

Florida Atlantic reported 27 positive virus cases the week that their Oct. 10 game against Southern Mississippi was postponed. There were several more confirmed cases among players a week ago when the Owls were idle. And Taggert said Monday two more players who had previously been in isolation tested positive for the virus.

Now comes the Owls' first road trip — fingers crossed — against a Top 25 team that should be quite the challenge.

With FAU playing only one game so far, it didn't give Marshall a lot to look over. So Thundering Herd coach Doc Holliday and his staff went back to watch film from when Taggert was the coach at Florida State and when FAU defensive coordinator Jim Leavitt held the same position at Oregon a few years back.

Marshall has brushed off the cancellation of three of its own games, reentering the national polls this week following a one-week stay at No. 25 in September after beating then-No. 23 Appalachian State.

Marshall has the nation's fifth-best defense, allowing 273 yards per game, while scoring at least 35 points in the past two contests behind redshirt freshman quarterback Grant Wells whose played beyond his years.

“They don’t do a lot but they do it really well,” Taggert said. "It’s going to be a big-time challenge for us. The quarterback, he’s the engine behind that. He can make all the throws and he’s pretty good with his feet.”

Some other things to know about the Owls and Thundering Herd:

KEEPING IT IN PERSPECTIVE

Amid the stress of the pandemic, playing on the road and against a nationally ranked team, FAU co-offensive coordinator Drew Mehringer is trying to keep the mood light.

“Relax, have fun, because you don’t get very many of these in your lifetime," Mehringer said.

As a freshman quarterback at Rice, a knee injury ended Mehringer’s playing career and he became a student assistant under offensive coordinator Tom Herman. In 2008, Mehringer underwent emergency brain surgery after a fall. He was unconscious for three days after surgery.

“I’m a great example of, you never when your last one’s gonna be,” he said. "Ignore all the stuff you can’t control, whether that’s crowd size, venue location, any of that stuff.”

FAU quarterback Nick Tronti rushed for 94 yards on 10 carries against Charlotte. He also threw for 98 yards on 11 completions.

Marshall limited Louisiana Tech to seven rushing yards last week and is third in the nation in rush defense at 68.5 yards per game.

“You’ve got to stop the run, and we’ve done that the last four games," Holliday said. "If we’re successful doing that, we’ve got a shot.”

Marshall is averaging 213 rushing yards and 224 passing yards per game. Running back Brenden Knox, the preseason Conference USA offensive player of the year, is averaging 113 yards.

Before this season, Marshall hadn't been ranked since 2014.

“I don’t think there’s any question, you’re excited to be where we are," Holliday said. “But what matters is where you are at the end of the season.”

He wants to make sure his players aren't buying into the hype.

“You starting listening to all the noise, you’re going to look up and get beat — and you shouldn’t,” Holliday said. "So we’ve got to get that fixed today and make sure our kids understand it’s a challenge every week. We’ll get everybody’s best shot, which we do anyways. We’ve got to make sure whoever we play gets our best shot as well.”

Marshall has 27 players from Florida, more than any other state on its roster.