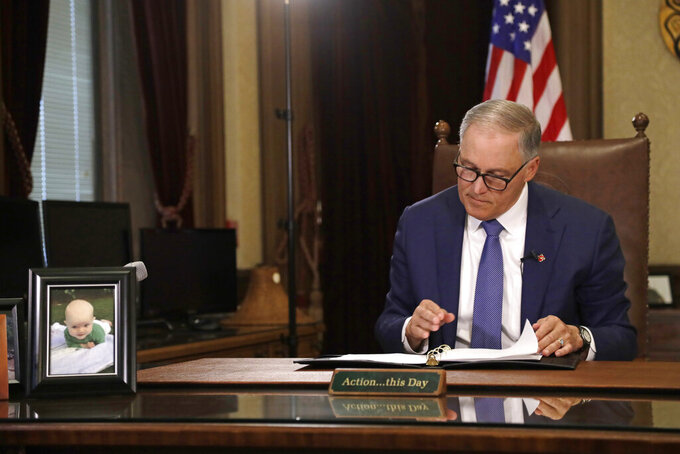 FILE - In this March 23, 2020, file photo, Gov. Jay Inslee prepares to speak about additional plans to slow the spread of the coronavirus before a televised address from his office in Olympia, Wash. Inslee's election to a third term as governor was among Washington state's top stories for 2020. (AP Photo/Elaine Thompson, File)

Washington saw the first confirmed case of COVID-19 in the United States this year, as well as the first deadly cluster as the pandemic upended virtually all activity in the state. The coronavirus outbreak was voted the state’s top news story of 2020 by Associated Press staff. Other top news items of the past 12 months included widespread protests over police issues, huge Western wildfires and the state’s attempts to deal with Asian giant hornets, better known as “murder hornets.”

1)U.S. COVID-19 pandemic begins in Washington: In January, the first confirmed case in the United States was recorded, a Snohomish County man who had travelled to China. A month later, the state also saw the nation’s first lethal outbreak at a nursing home in Kirkland. In response to the rising coronavirus numbers, Gov. Jay Inslee ordered schools to close doors to students, sweeping restrictions were imposed on businesses like restaurants and huge companies like Amazon told most employees to work from home. By the end of the year there had been more than 240,000 confirmed cases in Washington and more than 3,360 deaths.

2)Police protests: When police killed George Floyd in Minneapolis in late May protests erupted across the country, and some of the most intense and longest lasting were in Seattle. For several months in the late spring and summer large crowds gathered, mostly in downtown and Capitol Hill. Sometimes demonstrations turned violent, with police deploying pepper spray and tear gas. In June people took over a several block area for after police abandoned a precinct station following standoffs and clashes. Authorities dismantled the “Capitol Hill Occupied Protest” zone after about two weeks, but the debate over police funding and public safety issues continued. In November the City Council voted to shrink the police budget by about 18%, not as much as activists had sought.

3)Inslee wins 3rd term: Gov. Jay Inslee was elected to a third term by voters in November. Governors in Washington state aren’t subject to term limits, though most haven’t served more than two terms. The last three-term governor in Washington was Republican Gov. Dan Evans, who served from 1965 until 1977. Inslee defeated Republican challenger Loren Culp, the former police chief of the small town of Republic.

4)Western wildfires cause choking smoke. Deadly windblown wildfires raged across the Northwest in September. While much of the destruction was in Oregon, a 1-year-old boy in Washington died after his family was overrun by flames while trying to flee a wildfire in the northeastern part of the state. The biggest effect for most people was widespread smoke, which produced some of the planet’s worst air quality for days.

5)Seattle police chief Carmen Best resigns: In August Carmen Best, Seattle’s first Black police chief, announced her retirement after the City Council voted to cut her annual salary as well as the salaries of her command staff and to trim officers from the force during widespread protests following George Floyd’s killing. Best said she was OK with her pay cut, but not with having to lay off young officers, many of them minorities hired in part to improve the department’s diversity. When Best left the City Council was sharply criticized, with Black Lives Matter Seattle-King County saying the Council should “stop prioritizing performative action that solely suggests the appearance of change.”

6)Huge election turnout: A record number of voters participated in November’s election, but the overall turnout percentage fell just shy of the high mark of 84.6% set in 2008. While 84.8% of Washington state’s nearly 4.9 million voters returned a ballot for the Nov. 3 general election, the final rate hit 84.1% after county canvassing boards reviewed ballots that were challenged over issues like signatures or postmarks. More than 4.1 million voters cast a ballot this year, compared to the 3 million cast in 2008.

7) Massive unemployment hack: Restrictions imposed because of the coronavirus pandemic caused unemployment to surge in Washington state and criminals seized on the disruption to hack the state’s Employment Security Department. Tens of thousands of illegal unemployment insurance claims were filed last spring that totaled about $600 million and grew into the largest fraud in state history. Much of the money apparently went to a West African fraud ring using identities stolen in prior data breaches, such as the massive 2017 Equifax breach. As of June 30 the state had been able to recover about $250 million.

8)Storm win 4th championship: Many sports were put on hold by the pandemic, but the WNBA’s Seattle Storm finished off a dominant season with another championship. Breanna Stewart scored 26 points and Seattle completed a sweep of the Las Vegas Aces with a 92-59 rout in the final series. It was the biggest margin of victory in WNBA Finals history and the fourth title in franchise history for the Storm, who also won in 2004, 2010 and 2018

9)Seattle hockey team gets a name: And, taking the ice as Seattle’s new National Hockey League team, it’s…the Kraken. After starting with a list of roughly 1,200 names and suggestions team officials whittled them down to a final group of five. Ultimately, Seattle opted to unleash the sea creature from Scandinavian folklore on the rest of the NHL.

10)Murder hornets: In October workers from the state Department of Agriculture managed to destroy the first nest of so-called murder hornets discovered in the U.S. The nest, located in Whatcom County near the Canadian border, created concern because the Asian giant hornets are large and their sting can be lethal, especially if a person is stung numerous times. The hornets also pose a threat to honey bees that pollinate many crops. The invasive insect is normally found in China, Japan, Thailand and other Asian countries. Washington state and British Columbia are the only places the hornets have been found in North America.