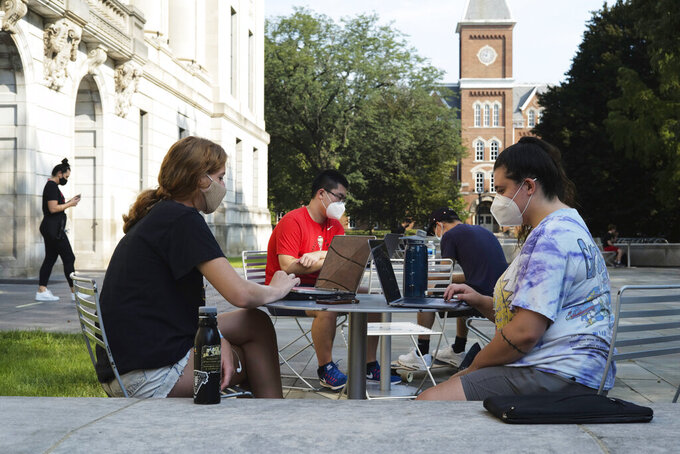 FILE - In this file photo from Aug. 25, 2020, students Jessica DeSena, right, and Camden Coggburn, left, both from Columbus, sit outside Thompson Library during the first day of fall classes at Ohio State University in Columbus, Ohio. Colleges in the U.S. have seen a sharp enrollment drop among international students this fall. University administrators say a number of hurdles and new policies brought on by the coronavirus pandemic are to blame. (Joshua A. Bickel/The Columbus Dispatch via AP, File)

He rushed home this summer after learning that his father was in failing health after being diagnosed with COVID-19, making it to his hospital bedside only four hours before he died.

“He was emotional; he was in tears,” Naini said. “I was fortunate to see him. I think he was waiting to see someone who would take care of my mother, and then he left.”

Two months later, when the 28-year-old was ready to return to the University of Toledo, his visa application was denied even though he had letters from his college advisers explaining why he had gone home and that he already was enrolled in classes. The only explanation he got, he said, was that he was turned down “based on guidelines they received from the White House.”

Complications and new policies brought on by the coronavirus pandemic have stopped thousands of international students from attending universities in the U.S. this fall, raising concerns that the steep decline could foretell a long-lasting shift for universities that have come to rely on attracting international students. At risk are millions of dollars in tuition for the universities and some of the world’s brightest minds for U.S. employers.

While the number of new international enrollees has been on the decline during the past few years because of new rules limiting student visas and competition from other countries, the pandemic has been a crushing blow.

This fall, new international students enrolled at U.S. universities online or in person fell by 43%, according to a survey of more than 700 schools released Monday. That's the largest decrease recorded by the Institute of International Education, which has been publishing data on international enrollment since 1954.

Including both new and returning students, total international enrollment fell by 16%. The survey found that among those who did enroll at U.S. colleges, about one in five were studying online from abroad.

Administrators agree the pandemic caused a wide variety of hurdles for students, ranging from financial strains brought on by job losses to worries over a Trump administration proposal that sought to force international students to leave if their schools held online-only classes.

With American consulates closed in many countries, quite a few first-time students were unable to get visas, while others were stranded because of travel restrictions and flight cancellations.

Universities were flooded with questions from worried parents who wanted to know where their children would live if schools closed their dorms and what would happen if they got sick. Some decided to stay home because of those unknowns.

“At a human level, we can all relate to that,” said Barbara Kappler, assistant dean of International Student & Scholar Services at the University of Minnesota, which saw a 15% decline.

It all has forced to students make tough choices. One University of Toledo student decided not to go home even though two relatives had died of COVID-19, said Tracey Hidalgo, the school’s assistant director for international student services.

“They just bawl their eyes out and tell me ‘no’ because they're worried they're not going to be able to come back,” she said.

Compounding the problems of the pandemic is a growing belief that the U.S. is no longer as welcoming for international scholars because of President Donald Trump’s repeated moves to curb immigration.

“The confluence of the pandemic and these policies has created an incredibly tough situation,” said Leonardo Villalon, dean of the University of Florida's International Center. “International higher education is under the greatest stress it has been in decades.”

The sudden drop in enrollment will be felt in budgets at colleges because foreign students typically pay higher tuition rates. The University of Illinois alone estimates it will lose about $26 million this semester. But the impact goes beyond that.

High-tech companies depend on foreign-born people who come to the U.S. for training, Villalon said.

“Where do we want the best and brightest young people in the world to go?” he said. “If you're running a research lab studying the coronavirus, you want the very best in there.”

There's hope among some college administrators that President-elect Joe Biden will carry through with promises to reverse some of Trump's immigration orders. Biden also has proposed giving foreign graduates of U.S. doctoral programs a pathway to citizenship.

But U.S. universities are facing increased competition from countries, including Canada and Australia, that are trying to woo more foreign students. And China is heavily investing in its colleges.

Ousmane Barry, a refugee from Guinea who moved to Italy when he was 16, thought he'd be starting classes this fall on an academic scholarship at Whitman College in Walla Walla, Washington.

But his visa application was turned down because he could not show enough ties to his home country. He's still holding out hope that he'll get another chance.

Going to the U.S. to study is still the best option, he said, because of all the educational opportunities it offers.

“I'm not trying to work or spend my life there,” said Barry, 21. “All I'm looking for is a better education and then to go back to my country.”