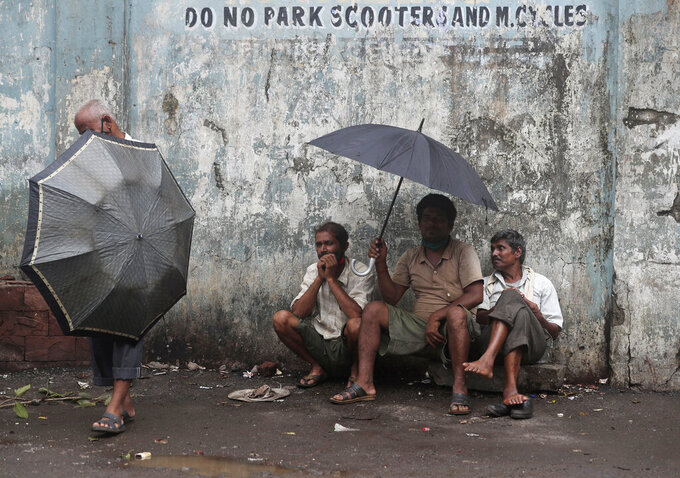 Daily wage laborers wait to be employed for the day, on a street in Mumbai, India, Friday, June 11, 2021. India’s economy was on the cusp of recovery from the first pandemic shock when a new wave of infections swept the country, infecting millions, killing hundreds of thousands and forcing many people to stay home. Cases are now tapering off, but prospects for many Indians are drastically worse as salaried jobs vanish, incomes shrink and inequality is rising. (AP Photo/Rafiq Maqbool) 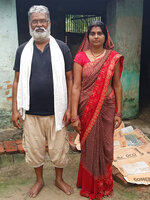 NEW DELHI (AP) — Ram Babu moved from his village to the Indian capital New Delhi in 1980, to clean cars. Soon, he learned to drive and got a job as a tour bus driver. Decades later, he set up his own company, Madhubani Tours and Travels.

In March 2020, a stringent nationwide lockdown to fight the coronavirus pandemic froze economic activity overnight. Babu's business collapsed, and he drove his family back to their village.

“Since March last year, we haven’t earned a single rupee,” he said. “All of my three buses are standing still for more than a year. We are completely broken.”

India’s economy was on the cusp of recovery from the first pandemic shock when a new wave of infections swept the country, infecting millions, killing hundreds of thousands and forcing many people to stay home. Cases are now tapering off, but prospects for many Indians are drastically worse as salaried jobs vanish, incomes shrink and inequality is rising.

Decades of progress in alleviating poverty are imperiled, experts say, and getting growth back on track hinges on the fate of the country’s sprawling middle class. It’s a powerful and diverse group ranging from salaried employees to small business owners like Babu: many millions of people struggling to hold onto their hard-earned gains.

The outbreak of the pandemic triggered the worst downturn since the Great Depression of the 1930s and as it gradually ebbs, many economies are bouncing back. The World Bank foresees 5.6% global growth for 2021, the best since 1973.

India's economy contracted 7.3% in the fiscal year that ended in March, worsening from a slump that slashed growth to 4% from 8% in the two years before the pandemic hit. Economists fear there will be no rebound similar to the ones seen in the U.S. and other major economies.

“Coronavirus was the latest in a series of blows to hit India’s economy in recent years,” said Mahesh Vyas, chief executive at the Center for Monitoring the Indian Economy (CMIE). “But the shocks brought on by the virus have had a very debilitating effect on the economy and I fear it is going to be long lasting."

The economy was one of the fastest growing when Prime Minister Narendra Modi suddenly yanked most of India’s currency out of circulation in 2016, targeting corruption. A major tax reform whose kinks are still being ironed out followed. Modi’s flagship Make in India program to energize manufacturing has floundered and unemployment has surged.

The poor are suffering the most from the pandemic. But this is the first time in several decades that India’s middle class has taken such a big hit, said Vyas.

After 40 years of hard work, tour company owner Babu was taking home about $2,000 a month. Business was going so well he took out a loan to buy his third tour bus.

In May 2020, he used one of those buses to drive his wife and three children back to Bhugol village in Bihar, one of India's poorest states. He could no longer afford the rent on their modest one-bedroom apartment in New Delhi.

Estimates of the size of India’s middle class vary from 200 million to 600 million, but all experts agree that its prosperity is crucial for reviving the economy.

“They are the primary consumers — if their consumption doesn’t revive, growth will continue to be slow and the economy will not recover,” said economist Arun Kumar.

An analysis from the Pew Research Center, published in March, estimates 32 million Indians had been pushed out of the middle class by the pandemic.

The report defined the middle class as people earning $10 to $20 a day. It estimated the number of India's poor -- those with incomes of $2 or less a day -- has increased by 75 million because of the crisis.

To cushion the impact, the government provided $266 billion in extra spending in May 2020, with over $40 billion meant to help small and medium-sized businesses through measures like collateral-free loans from banks. Another $36 billion was promised in November to help create jobs, boost consumer spending and support manufacturing, agriculture and exports.

But for many, the measures haven't been enough. No relief has yet been announced for the tourism sector, so Babu is still paying business taxes on his buses.

Last year's lockdown destroyed more than 120 million jobs, according to the CMIE. Many returned soon after the lockdown ended in June, but the rebound was mostly of low-paying jobs in sectors like agriculture and construction.

Economists worry about a longer term decline in salaried jobs, of which 12.5 million remain lost, according to CMIE data, and about the fate of small and medium-sized businesses that are the backbone of India's vast informal economy.

Many people have had to settle for far more precarious employment than before, according to the State of Working India 2021 report by researchers at Azim Premji University.

“What this signals is that people in distress are having to resort to any kind of employment, even if it pays substantially less than what they were making and comes with fewer protections,” said Rosa Abraham, one of the report's lead authors. “It’s clear that the employment recovery we’re seeing now is characterized to a significant extent by far more informality.”

That's true for Bijender and Kanika Gautam, owners of the Ultra Bodies Fitness Studio on the outskirts of New Delhi.

Gyms were among the last types of venues allowed to reopen from the 2020 lockdown and they were closed again during the latest outbreaks. The Gautams had been thriving on income from their 100 gym members, making enough to rent their two-story space and pay five trainers. Now, they're relying on whatever they can scrape together from offering online fitness training, and struggling to afford rent and school fees for their two children.

“Earlier, we didn’t have to think twice about spending money when we went to the market with our children or went out to eat,” said Bijender. “But now, the situation is so bad that we are somehow just trying to survive. We don’t know if we will be able to keep our business,” he said.

On a wider scale, such setbacks on a wide scale may undermine confidence and future growth, said CMIE's Vyas.

“You need that aspiration or drive to go to college, get a good job, save money to buy a home -- you need that ambition to make your life better than what your parents had. This is what makes the economy thrive, and this is a crucial thing that has taken a big hit,” he said.

Babu says he fears his life is now moving in reverse. He had hoped his youngest daughter, aged 13, might become a pilot. Now that he's had to pull her out of her school in New Delhi, that seems impossible.

His dreams of buying a home in the city have been crushed by the loans he can no longer repay, he said in a phone call from his village.

“I’m not used to living in the village now. Everything we own, everything we are, it’s all in Delhi,” he said. “I should have just continued working as a driver, maybe then I wouldn’t be in this mess."